>> Download The Action Network App to get real-time MLB odds, track your bets and follow all of our experts’ picks.

Throughout the day, there are four pitchers on FanDuel priced at $9,500 or more.

On the early slate, Carrasco has the benefit of pitching at Target Field, where he has a 75 Park Factor (vs. 59 at home). His matchup isn’t especially exploitable (the Twins own a middling 24.2% strikeout rate and .327 wOBA against righties over the past year), but Carrasco tends to dominate on the road, where he has a +3.70 DraftKings Plus/Minus, albeit with a 31.7% ownership rate in large guaranteed prize pools (GPPs). At home, those numbers have dipped to -5.20 and 8.8% (per our MLB Trends tool). He’s in fine form with a slate-leading 1.17 WHIP and 10.60 SO/9 over the past year, and his 7.1 K Prediction trails only that of Rich Hill on the all-day slate.

Hill could be a potential pivot to Carrasco, as West Coast games tend to have lower ownership, and he leads the slate in both DraftKings Pro Trends (7) and K Prediction (7.3). He could be an excellent tournament play: The opposing Brewers are implied for only 3.6 runs and mediocre against lefties, ranking 27th in weighted runs created plus (wRC+) this season (FanGraphs).

Keuchel is one of the few high-priced pitchers who is a better value on DraftKings than FanDuel with an 84% Bargain Rating, but he’s not an appealing option. The opposing Mariners wreck lefties (seventh in wRC+), and their projected lineup owns just a 22.0% strikeout rate. Keuchel’s upside is limited, as his 7.05 SO/9 over the past year is below average. Even in a contrarian universe, it is tough to pay up for a guy with a pathetic 4.6 K Prediction.

On the all-day slate, Syndergaard has the best recent Statcast data of all the high-priced options, sporting a 177-foot batted-ball distance allowed, 86-mph exit velocity and 31% fly-ball and 21% hard-hit rates. The Nats punished the Mets yesterday with 25 runs (not a typo), but as of writing there is no Vegas data for today’s game. For what it’s worth, pitchers with similar salaries and strong Statcast numbers have provided a +3.73 FanDuel Plus/Minus with a 66.7% Consistency Rating. 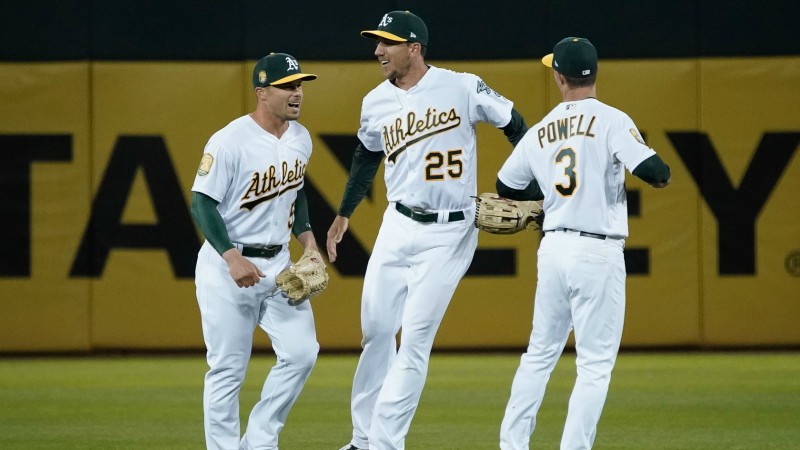 The Rockies have the highest strikeout rate on the main slate (28.3%), so Luke Weaver could provide upside at a discount: His 7.2 K Prediction trails only Hill’s on the main slate. His Statcast numbers don’t stand out, but the Cardinals are -131 moneyline favorites, and the Rockies are implied for a paltry 3.8 runs. Similarly priced pitchers with comparable Vegas data and K Predictions have historically been reliable options with a +2.54 DraftKings Plus/Minus and 63.6% Consistency Rating.

His poor 1.59 WHIP doesn’t inspire confidence for cash games, but Dylan Covey is a viable tournament play against a projected Royals lineup with an exploitable 28.0% strikeout rate against righties. Covey doesn’t have much strikeout upside with only a 4.3 K Prediction, but his recent Statcast data is palatable, and the White Sox are -111 moneyline favorites at home.

Sonny Gray: Vegas is once again on the Yankees at home, installing them as slate-leading -253 moneyline favorites while implying the Orioles for just 3.4 runs. Baltimore ranks 25th in wRC+ against right-handed pitching this season. Gray sports a decent 6.3 K Prediction against a projected Orioles lineup with a .298 wOBA against righties over the past year, and he should have a ton of run support as the Yankees lead the early slate with an implied total of 5.7 runs. Historically, pitchers with comparable Vegas data and K Predictions have been fantastic investments on DraftKings, averaging a +3.50 Plus/Minus with 80.0% Consistency Rating.

Anibal Sanchez: He could end up as the main slate’s chalkiest pitcher next to Hill, but Sanchez’s high ownership may actually be warranted: He has -168 moneyline odds against a Marlins team that ranks 26th in wRC+ to right-handed pitching. Miami’s projected lineup has an above-average 26.9% strikeout rate and bottom-two .292 wOBA to righties as well. Sanchez has the tendency to give up the long ball with a 1.71 HR/9 over the past year, but he has upside with the third-highest K Prediction on the slate.

>> Sign up for The Action Network’s daily newsletter to get the smartest MLB conversation delivered into your inbox each morning.

With the Lineup Builder, it’s easy to incorporate stacks into DFS lineups. The top five-man DraftKings stack in the CSURAM88 Model belongs to the White Sox, whose implied total of 4.9 runs trails only that of the Braves on the main slate:

The White Sox provide the best Team Value Rating on the main slate, and they have the pleasure of taking on Royals righty Jake Junis, who owns a subpar 1.67 HR/9 over the past 12 months. Even though Junis has been better over his last two starts, yielding a batted-ball distance of just 187 feet, his long-term Statcast data is inviting.

Moncada, projected to lead off, has dramatic batting splits in his favor today with .071 wOBA and .093 ISO differentials, but the player most likely to break through may be Palka. He’s in excellent batted-ball form, sporting a 249-foot average distance, 95-mph exit velocity and 62% fly-ball rate over the past 15 days. Historically, hitters in similar lineup spots with comparable batted-ball metrics and implied run totals have averaged an 18 Upside Rating at only 6.8% ownership in large GPPs.

The top four-man FanDuel stack in the Bales Model belongs to the Indians, who trail only the Yankees on the early slate with their 5.2-run implied total:

They’re expensive, but it may be worth it, as the Indians are set to take on Twins lefty Adalberto Mejia, who has a slate-worst 1.90 WHIP over the past 12 months. Cleveland crushes left-handed pitching with an impressive 19.8% strikeout rate and .341 wOBA. Guyer offers the most salary relief at $2,700, and he is on the right side of his dramatic batting splits with a .408 wOBA and .218 ISO. His 10 Pro Trends lead all batters today, and he’s been on an absolute tear with a 249-foot batted ball distance and 57% fly-ball rate over the past 15 days.

The Tigers are outside the top tier with a 4.5-run implied total on the early slate, so they could go under-owned. Projected to lead off, JaCoby Jones has quietly been swinging a hot bat; it just hasn’t translated into fantasy success recently with 4.0 DraftKings points per game over the past month. His +88 Recent Batted Ball Luck indicates he could be due for a breakout, and on the slate he trails only Chris Davis (+42) and Brandon Guyer (+44) with his distance differential of +39 feet over the past 15 days.

Cincinnati batters are also intriguing on the early slate, mostly because Eugenio Suarez has excellent recent Statcast data with an average distance of 265 feet, exit velocity of 99 miles per hour and hard-hit rate of 60%, smashing his 12-month averages with differentials of +32 feet, +5 mph and +14 percentage points. Scooter Gennett has comparably immaculate numbers in the No.2 spot, and he is a value on FanDuel with a 90% Bargain Rating.

The Dodgers have been as hot at the plate as any team in the league recently. Joc Pederson, Manny Machado and Matt Muncy all sport batted-ball distances of 222 feet or higher over the past 15 days and are generating a ton of hard-contact with 41% or higher hard-hit rates. Brewers righty Chase Anderson owns a slate-worst 51% fly-ball rate over his last two starts, and the Dodgers are just outside the top tier of implied totals and could go under-owned in tournaments.

The Braves will be popular with a slate-leading 5.2-run implied total in the evening, but Ronald Acuna and Freddie Freeman are certainly worth rostering. Acuna will lead off and has obliterated right-handed pitchers over the past 12 months, owning a .371 wOBA and .250 ISO. Further, he’s generating tons of hard contact over the past 15 days with a 94 mph exit velocity and 46% hard-hit rate. Freeman has impressive Statcast data in his own right in the No.3 slot, and batters with similar implied totals and peripheral stats have provided a +1.41 Plus/Minus and 16 Upside Rating.