Verlander has been excellent this season, pitching to a 3.62 xFIP with a 25.8% K-BB%. He’ll have a tougher matchup against a projected A’s lineup that has a 22% strikeout rate and .341 wOBA, but Verlander should still carry a relatively high floor with his strikeout ability.

Verlander has typically avoided from games that can destroy a DFS roster. He’s averaged a +7.09 FanDuel Plus/Minus with a 60% Consistency Rating and has scored fewer than 31 FanDuel points just once this year. He leads our main-slate median projections on Saturday.

Soroko is on the early slate, but he’s one of the safer options. His 3.69 xFIP and 1.07 ERA suggest he’s been a bit lucky this season, but he draws one of the best matchups on the board against a projected Tigers lineup that has a strikeout rate of 27.5% and .268 wOBA against righties over the past 12 months. Additionally, the Tigers rank dead last in Weighted Runs Created Plus (wRC+) vs. righties this season.

Kershaw carries a 5.4 K Prediction and costs over $10,000, and it’s hard to back an expensive pitcher with limited strikeout upside. The projected Phillies lineup has a low 22.9% strikeout rate with a solid .341 wOBA, and the team ranks 10th in wRC+ against lefties.

However, the Dodgers do have favorable Vegas data as -197 favorites, and the Phillies are implied for just 3.5 runs. While that’s encouraging, the lack of strikeout upside is enough to take me off him on this slate at his price. Kershaw owns an uninspiring -1.71 Projected Plus/Minus on FanDuel.

Greinke carries a solid 21.1% K-BB% this season, but he’s basically in a pick’em game vs. Jacob deGrom. The matchup isn’t anything to write home about, but it’s not one to be afraid of either. The projected Mets lineup has a 25.1% strikeout rate and mediocre .313 wOBA over the past year against righties. And they rank 22nd in team ISO and 14th in wRC+ this season. He’s a better value on DraftKings with his 86% Bargain Rating.

Andrew Heaney struck out eight Rangers in five innings in his debut last week after dealing with elbow issues to begin the season. While the Mariners’ 4.4 implied run total is on the higher side, Heaney trails only Verlander on the main slate with his 7.6 K Prediction. Further, the Mariners have struck out at a massive clip over the past year against right-handed pitchers with their 29.1% strikeout rate. Heaney owns a top-two Projected Plus/Minus on both sites for the main slate.

Jack Flaherty possesses an excellent 26.4% strikeout rate this season, which could bode well for him against a projected Cubs lineup with a 26.3% strikeout rate against right-handed pitchers over the past 12 months. Flaherty is in play on either site, but he’s an exceptional value on DraftKings with his 89% Bargain Rating and top-three Projected Plus//Minus.

Brandon Woodruff: He’s the most appealing pitcher on the early slate after Soroka. The Pirates have a low 22.9% strikeout rate and a middling .319 wOBA, but they have a weak 3.9 implied run total, and the Brewers are sitting at -169 on the moneyline. Overall, the Pirates have the second-lowest implied total on the slate. 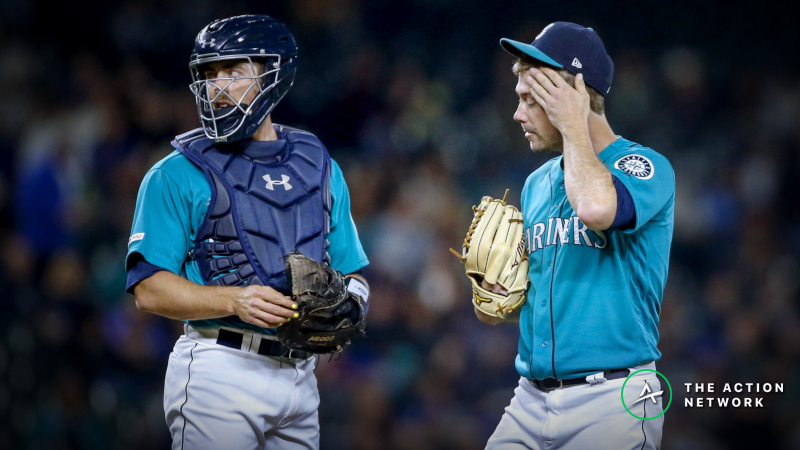 Should We Expect the Mariners to Keep Cashing Over Tickets? – Read now

With our Lineup Builder, it’s easy to incorporate stacks into DFS lineups. One of the top four-man DraftKings stacks in the CSURAM88 Player Model for the early slate belongs to the San Francisco Giants.

The early slate could have some high scores with an abundance of teams implied for over 5.0 runs. One of those teams is the Giants. Opposing pitcher David Hess has an abysmal 1.41 WHIP and 2.48 HR/9 over the past year. He’ll also enter this game with horrible Statcast data, possessing a 236-foot average distance, 96-mph exit velocity and 48% hard-hit rate over his past two starts.

Belt especially stands out in this stack with his incredible batted-ball data. He’s throttled the baseball over the past two weeks, sporting a 256-foot average distance, 97-mph exit velocity and 51% hard-hit rate. He could be due for some progression with his +63 Recent Batted Ball Luck (RBBL), and the matchup against Hess could help with that.

The top FanDuel stack on the main slate in the CSURAM88 Model belongs to the Colorado Rockies.

It isn’t surprising to see the Rockies check in with the highest-rated main-slate stack since there are just two teams implied for over 5.0 runs. The Rockies’ 6.2 implied run total leads the slate by 1.1 at the time writing. As a result, they also have a slate-high Team Value Rating of 79 in our Vegas Dashboard.

Story hit two home runs and piled up seven RBIs on Friday. He’s in amazing batted-ball form right now, evidenced by his 242-foot average distance, 95-mph exit velocity and 55% hard-hit rate, all of which best his 12-month marks. He’s also smashed right-handed pitchers over the past year with his .393 wOBA and .288 ISO.

Murphy is also in good form, sporting positive differentials in batted-ball distance, exit velocity and hard-hit rate along with a +60 RBBL. Per our Trends tool, hitters with comparable RBBLs and batted-ball data at Coors Field have averaged a massive +3.38 FanDuel Plus/Minus.

The top outfielder for the early slate in the Bales Model is Ronald Acuna. The Braves are in a good spot with a 5.9 implied run total against Daniel Norris. Their total has gone up 0.7 runs since the lines opened. Acuna enters this game in good form with a 229-foot average distance, 94-mph exit velocity and 46% hard-hit rate. He’s also dominated lefties over the past 12 months, hitting them to the tune of a .452 wOBA and .369 ISO.

Chris Taylor offers cheap exposure to the Dodgers, who have a 5.1 implied run total against Cole Irvin. He has gotten rocked over his past two starts, allowing 12 hits and 10 earned runs across 10.2 innings. Taylor is projected to occupy the leadoff spot, and he’s hit lefties well over the past year, boasting a .332 wOBA and .215 ISO. Taylor leads both DraftKings and FanDuel in Projected Plus/Minus among all hitters.

If you want some exposure to the Blue Jays at Coors Field, Vladimir Guerrero Jr is appealing with his 82% Bargain Rating on DraftKings, but he’ still affordable on FanDuel as well. He’ll be on the positive side of his batting splits, possessing a .368 wOBA and .238 ISO against right-handed pitchers. It’s also a bonus that he’s projected to be near the top of the order, which has historically resulted in a +2.41 FanDuel Plus/Minus at Coors Field.