Thursday has a split slate: There are seven games in the 12:35 pm ET early slate and five games in the 7:10 pm ET main slate.

On Tuesday, Chris Sale‘s ownership levels on DraftKings approached 50 percent across various stakes, and that was on a 15-game slate with a variety of other ‘studs’ also available (data via our MLB Ownership dashboard).

Today, Max Scherzer is the highest-priced pitcher by $3,000 on DraftKings and $2,500 on FanDuel. Where will his ownership be tonight? (Hint: Probably even higher than Sale’s on Tuesday.) 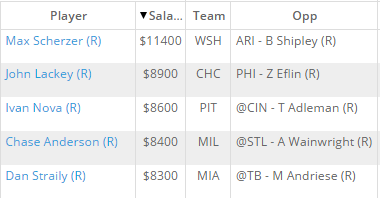 John Lackey is the only pitcher that can rival him in terms of Vegas data — they both come with opponent run implications of 3.0 and are -200 or greater moneyline favorites — but Lackey’s current form and Statcast data is much worse. Over his last three games, he’s given up 13 earned runs and 21 hits across 18 innings pitched, and his batted ball data is even more scary: Over his last two, he’s allowed a batted ball distance of 208 feet, an exit velocity of 96 miles per hour, and a hard hit rate of 45 percent. He does come with a slate-high 11 FanDuel Pro Trends, and his current 7.9 K Prediction is just 0.5 below Max’s, but there are certainly negative indicators present.

I know: Scherzer wasn’t exactly great in his last outing either, allowing five earned runs and nine hits across six innings to the Mets. Over his last two games, he’s allowed a very-high batted ball distance of 239 feet. But it wasn’t really that bad: Almost all of the damage came from two home runs from Travis d’Arnaud, who owns a poor .109 ISO mark against right-handed pitchers over the last year. And even despite Scherzer’s bad outing, Mad Max’s contact and velocity data are just fine, as evidenced by his 91 mile per hour exit velocity and low 28 percent hard hit rate.

As mentioned in yesterday’s breakdown, pitchers with a moneyline of -200 or greater have historically averaged 40.13 FanDuel points and a +6.76 Plus/Minus on 67.6 percent Consistency. Even if we narrow the range to look specifically at pitchers around Scherzer’s -260 mark, things stay the same (per the MLB Trends tool):

He’s the safest pitcher on the board, and his 8.4 K Prediction leads all pitchers by 0.5 strikeouts. Yeah, his ownership should be high.

Both pitchers listed above are in the early slate, which means the five-game main slate is fairly brutal in terms of pitching. Cardinals righty Adam Wainwright will likely be the most popular pitcher, as his opposing run implication of 3.4 against the Brewers is the best in the slate by 0.4 runs. It’s a little scary to take a pitcher against Milwaukee, who ranks first in the league by a mile this season with a .220 team ISO. That said, the implied run totals for the Brewers have been lower than expected lately, and I’m curious if bettors are shorting the club. Several of their batters have put up unsustainable numbers; Eric Thames is the obvious example of this, as he owns a .435 ISO mark in 2017.

I initially thought that the Brewers’ low run total might have been due to bad weather in St. Louis — they canceled last night’s game and are still under a Flash Flood Watch tonight — but that doesn’t make sense with the Cardinals’ total, which has moved up 0.3 runs despite getting equal action on both sides:

My hypothesis is thus that either some sharp bettors are believers in Wainwright, who has posted a poor -5.04 FanDuel Plus/Minus on 20 percent Consistency this season, or they’re bearish on the Brewers’ offense. I would guess it’s the latter, but either way, Wainwright makes sense as a cash-game option tonight.

Dan Straily owns the second-highest K Prediction in the main slate (behind Wainwright’s 6.9 mark) at 6.8, and he’s in a pitcher’s park in Tampa Bay. That said, he comes with an opponent run implication of 4.3 runs, and he’s a +121 dog against Rays righty Matt Andriese. Straily struggled in his last outing, racking up only 22.0 FanDuel points after putting up 61.0 and 14 strikeouts in the game before. And his Statcast data is a little concerning: Over his last two games — which includes that gem against the Padres — he’s allowed a batted ball distance of 218 feet, a fly ball rate of 51 percent, and a hard hit rate of 34 percent. But really, Straily’s best data point is that, in a slate littered with weather concerns, he’s playing in a game with a roof. 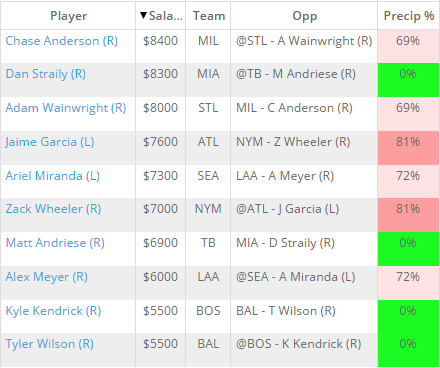 Woody Allen once said something like, “Eighty percent of success is showing up and staying dry.”

Ian Kennedy: He’s third in the early slate with a 6.8 K Prediction, and he gets umpire Bill Miller behind home plate, who has historically added a hefty 2.3 FanDuel points over expectations to pitchers; he has an opponent run implication of just 3.5 against the White Sox

Joe Musgrove: He gets a pitcher-friendly ump as well in Tony Randazzo, and his 6.7 K Prediction is the highest mark among all pitchers below $8,000 on FanDuel; he’s allowed a low 27 percent hard hit rate over his last two starts and gets a Texas offense implied for just 3.8 runs

With our Lineup Builder, it’s easy to incorporate stacks into DFS rosters. Given the split slate, we’ll use player ratings in the Bales Model to generate a stack on DraftKings for the early slate and on FanDuel for the main one:

The highest-rated five-man DraftKings stack is currently a 1-2-3-4-5 straight stack of the Athletics. This should actually be a somewhat contrarian option, as Oakland is currently implied for 4.4 runs — 0.7 runs behind the Nationals’ slate-high 5.1 mark and just the fifth-highest overall in the early slate. They face Minnesota righty Kyle Gibson, who owns a slate-worst 1.608 WHIP and has been absolutely miserable so far in 2017:

His Statcast data is just as bad: Over his last two games, he’s allowed a batted ball distance of 221 feet, an exit velocity of 94 miles per hour, and a hard hit rate of 52 percent. Oakland doesn’t have the big-name bats like the Nats or Cubs, but they still have a lot of upside today.

The highest-rated four-man FanDuel stack in the main slate is a 1-2-3-4 straight stack of the Mariners:

They’re currently implied for 4.6 runs — the third-highest mark in the main slate — and face Angels righty Alex Meyer, who is getting his second start of the year. He went only 3.2 innings in his first outing, in which he allowed two earned runs and walked four batters. His Statcast data is solid — in that game, he allowed a batted ball distance of 115 feet, an exit velocity of 80 miles per hour, and a hard hit rate of eight percent — but it’s hard to take away anything from a three-inning sample. The Seattle bats have been crushing the ball lately: Each batter in this four-man stack has averaged a batted ball exit velocity of 94-plus miles per hour over the last 15 days. Ben Gamel, who is projected to hit second tonight (per the MLB Lineups page), is especially cheap at only $2,300 on FanDuel.

Miguel Sano continues to put up video-game like Statcast numbers: Over his last seven games, he’s averaged a batted ball distance of 248 feet, an exit velocity of 100 miles per hour, and a hard hit rate of 59 percent. Sano has played 24 games over the last month; the number of players who have averaged a 100 MPH exit velocity with a month count of at least 10 games is incredibly small:

Those batters have averaged a 33 percent Upside rate; for reference, the baseline rate for all batters is 15 percent. Sano is projected to bat third against Oakland righty Jharel Cotton, who has allowed a batted ball distance of 231 feet, an exit velocity of 92 miles per hour, and a hard hit rate of 39 percent over his last two starts. The Twins are currently implied for 4.7 runs — the third-highest mark in the early slate.

The Joey Gallo-at-cleanup experiment didn’t work too well last night, as the Rangers lost 1-10 and Gallo finished with three strikeouts in three at-bats. We currently have him projected back in his old sixth spot in the order, and it could be a nice time to take advantage of some recency bias. Last night’s game was poor, sure, but Gallo still owns nice Statcast data: Over his last 11 games, he’s averaged a batted ball distance of 253 feet, an exit velocity of 93 miles per hour, a fly ball rate of 54 percent, and a hard hit rate of 58 percent. He has a ‘tough’ matchup against Musgrove, but Gallo is one of the most powerful batters in the league no matter the matchup or batting order.

Good luck, and be sure to do your own research with the Labs Tools!