DraftKings and FanDuel are each offering first-place prizes of at least $150,000 in their largest one-game guaranteed prize pools for Monday’s Game 7 of the Western Conference Finals between the Golden State Warriors and Houston Rockets at 9 p.m. ET.

If you’re not familiar, DraftKings’ one-game contests feature six-man rosters, a $50,000 cap and no scoring multipliers, while FanDuel’s feature five-man rosters, a $60,000 cap and scoring multipliers for whichever player you designate as the MVP (2x), Star (1.5x), and Pro (1.2x). FanDuel’s multipliers introduce more lineup combinations and should help to limit some of the all-too-common ties that occur in these contests, while DraftKings’ lack of multipliers increases the likelihood of ties and therefore provides extra incentive to go contrarian in other ways, such as by taking a player projected for extremely low ownership or by leaving salary on the table. 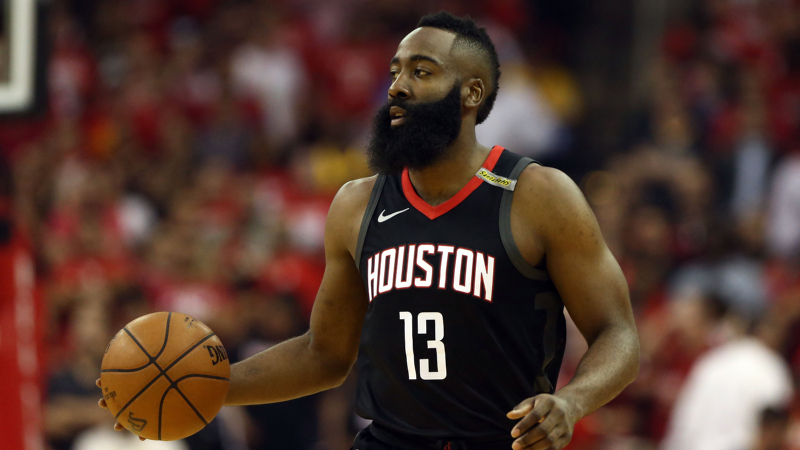 Mears: The Rockets Need an All-Time Performance From James Harden

The Cavaliers punched their ticket to a fourth straight NBA Finals on Sunday night, and the Warriors will try to do the same tonight. The Warriors fell down by double digits early but turned a 10-point halftime deficit into a 10-point fourth quarter lead behind another trademark third-quarter performance. The Warriors looked much more fluid on offense — their 26 assists were the most they’ve tallied during the series — while the Rockets struggled with Chris Paul on the sidelines. Sports books have responded by making the Warriors favorites for Game 7 despite being on the road, which is something that has happened just once since 2005.

Stephen Curry got his mojo going in Game 6, scoring 51.75 DraftKings points, but it still feels like he has upside for more. Curry shot just 5-of-14 (35.7%) from 3-point range, including just 4-of-12 on 3-pointers that were considered “open” or “wide open,” per NBA.com’s player tracking data. Curry relished Paul being on the sidelines in Game 6, exceeding his per-100-possession seasonal scoring average against both Eric Gordon and Trevor Ariza. Curry should be on the attack again in Game 7 if Paul is unable to suit up.

On the other hand, Kevin Durant failed to post a positive Plus/Minus on DraftKings for the sixth straight game in this series in Game 6, and his fantasy production has fallen to “just” 1.22 DraftKings points per minute over the past month — slightly lower than Curry’s mark (1.25) and far behind James Harden (1.32). Durant has been blanketed by Ariza for most of the series, with Ariza holding him to 8.3 points per 100 possessions below his per-100-possession average. Durant will likely improve upon his usage rate of 30.6% from Game 6, but there is no guarantee that he gets to the free-throw line 14 times again.

Klay Thompson absolutely exploded in Game 6, scoring 35 points on 13-of-23 shooting from the field and 9-of-14 from 3-point range. Thompson is always capable of going off, but he seems like a prime fade candidate on today’s slate; not only has his salary has increased by $2,000 on DraftKings, but he’s also posted fewer than 30 fantasy points in four of the six games of the series. Thompson’s ownership is likely to be inflated as well.

Draymond Green was one point and one steal away from recording the rare 5×5 game (at least five each of points, rebounds, assists, steals and blocks), which is something that hasn’t been done in the postseason since the NBA started tracking steals and blocks in 1983-84. That kind of versatility demonstrates the kind of impact that Draymond can have on a game without scoring and it’s a big reason why he’s scored at least 44.25 DraftKings points in three of the past four games. He has personally dominated the Rockets over the past two seasons, posting an average Plus/Minus of +4.32 over 17 games, per our NBA Trends tool.

Andre Iguodala has been ruled out, meaning the fifth spot in the rotation will be up for grabs again. Kevon Looney will enter the starting lineup, but he’s played 21.5 minutes or fewer in each of the past two games. Looney’s fantasy production has fallen to 0.73 DraftKings points per minute over the past month; there are likely more appealing options in his price range.

One of those options could be Jordan Bell, who actually saw more minutes than Looney did in Game 6. Bell is cheaper than Looney on both DraftKings and FanDuel and has also been slightly better in terms of per-minute production over the past month.

Shaun Livingston and Nick Young round out the Warriors’ rotation, but neither player has shown much fantasy upside during this series. That said, Livingston could be worth considering as a punt play on DraftKings at just $2,200. He’s currently projected for 17.5 minutes in our NBA Models  and did score 17.0 DraftKings points in Game 3.

The status of Chris Paul (hamstring) for Game 7 is still unknown at the time of this writing, but he is likely to be severely limited even if he’s active, putting a ton of pressure on the shoulders of James Harden. Harden posted a usage rate of 41.6% in Game 6, and he managed to snap a stretch of where he was 0-for-22 from the 3-point line, but his shooting numbers were still subpar in that game (10-of-24 from the field, 4-of-12 from 3-point range). Harden also turned the ball over nine times in that contest and has the potential to improve upon his 57.75 DraftKings points if he posts better marks in either of those departments in Game 7. Ultimately, the Rockets are going to need a massive performance from Harden if they’re going to win this series, which gives him the highest ceiling on Monday’s slate.

Clint Capela saw a slight bump in playing time with Paul out of the lineup, logging 29.5 minutes in Game 6. Capela pulled down 15 rebounds in that contest, but his overall fantasy numbers were limited by his usage rate of just 9.1%, and he scored just two points on three total shot attempts as the Warriors continued to make it a priority to stay glued to him on the pick-and-roll. Ultimately, Capela seems overpriced considering his inability to score consistently throughout the series.

If you’re willing to stomach some risk, Chris Paul could be an interesting target if active. Paul has been priced down to just $8,800 on DraftKings despite the fact that he’s arguably been even better than Harden over the course of the series. Paul’s average of 1.27 DraftKings points per minute over the past month is the second-best mark on the slate; he’s significantly cheaper than most of the other studs.

Eric Gordon has been priced up to the fifth-most expensive option on DraftKings, but he could still be a nice value as just the eighth-most expensive option on FanDuel. Gordon has scored well over the past two games; unfortunately, he’s struggled with turnovers and a lack of peripheral statistics. Still, with Paul likely out/limited, Gordon should be in line for a large role in Game 7.

Trevor Ariza and P.J. Tucker should both play big minutes on the wing tonight for Houston, and each is viable at his current price point. Tucker has been the slightly better of the two as of late, although Ariza has been just as good or better when taking into account the entire season.

Gerald Green has the potential to play a decent role if Paul is out of the lineup and is the last player worth considering for the Rockets. Green saw 26.5 minutes in Game 6 and has the potential to post the third-highest usage rate on the team. He averaged 0.86 DraftKings points per minute during the regular season — more than both Ariza and Tucker.

Be sure to check out The Action Network for more in-depth NBA analysis.