Using our Stacking tool found within our Player Models, this piece identifies some of the top stacks of the weekend. Check out our Correlations page as well to find hidden edges in stacking positions and games.

When many people think about the Bengals right now, they think about how Cincinnati has been shredded on the ground the last few weeks. However, the Bengals are equally terrible against opposing quarterbacks, allowing the second-most DraftKings points to the position this season. The Bengals are also second in opposing Plus/Minus at quarterback. Mayfield broke the 20-point barrier in the last game before the bye, and he did so on just 20 pass attempts.

Landry has received 28% of all targets from Mayfield this season, a 13% margin more than the next player. It is clear that the former Dolphin is the preferred target for the rookie signal-caller. The Bengals are fourth in fantasy points allowed to opposing wide receivers. The Bengals and Browns are both top 10 in overall pace, giving this game great shootout potential.

Over the past four games, Mack has provided a spark to the Colts in the run game. He has two games of 30 DraftKings points in that time frame, and he has dominated the running back touches when contests have been close. Mack has recorded 71% of the Indianapolis carries when the Colts have been anywhere from down three points to up 10. What has kept Mack’s production down is his 43% market share of carries in all other situations.

The Dolphins have been shredded by running backs of late. They are third in opponent Plus/Minus at running back and have yielded a 20-point performance in six of their past seven games. The Colts are -9 favorites in this game, and Mack is projected for 65.1 rushing yards. Since 2014, running backs favored by at least seven points and projected for at least 50 yards have had an average Plus/Minus of +2.43.

Dolphins quarterback Ryan Tannehill will be making his return this week, but he might be just as good for the Colts defense as Brock Osweiler would have been. Tannehill has a higher interception percentage and the Dolphins have scored more points per drive without him (1.64) than with him (1.48) this season. 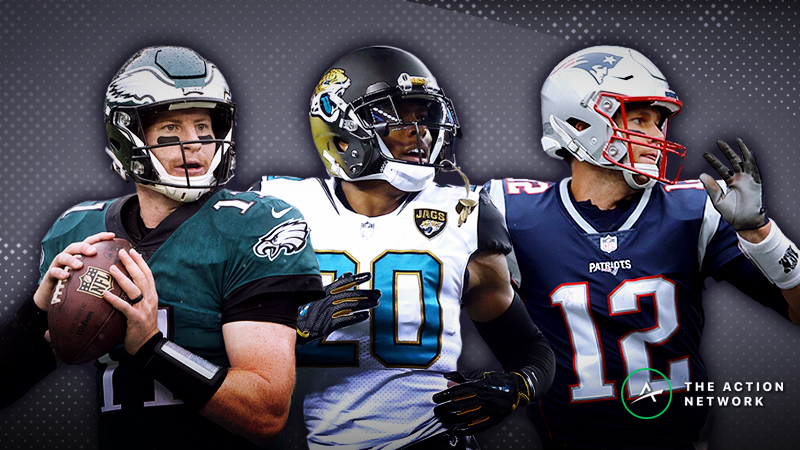 This is my favorite shootout spot of the week. Both the Bucs and 49ers are top 12 in Football Outsiders’ situation-neutral pace. They are also top 10 in fantasy points allowed to opposing quarterbacks. The over is 8-2 so far this season in Tampa Bay games, according to Bet Labs, and it appears that sharp bettors are expecting another high-scoring game. Despite the total opening at 54 points, 99% of the early money has been on the over, and it is now up to 55.

Both teams are especially vulnerable to the deep passing game. They are each bottom-three in DVOA against the deep ball, which should benefit outstanding deep threats in Goodwin and Jackson. Goodwin is second in catches of 40-plus yards over the past two seasons, while Jackson is second only to Chiefs wide receiver Tyreek Hill in that category for 2018.

Kittle has been one of the best tight ends in fantasy this season. He is fourth in DraftKings points per game and has at least 17 points in each game with Mullens. The Bucs are second in points per game allowed to tight ends and third in opponent Plus/Minus.

You have to go all the way back to Week 1 to find a 30-point performance from Rivers, but he has managed to go over 20 points six times this season. Arizona has been a tough matchup for quarterbacks so far, but that likely makes Rivers a contrarian option in a game in which the Chargers have an implied Vegas total of 28 points. L.A. has the third-highest team total on the week.

The Cardinals are running nine more plays per game in the Byron Leftwich era, and that pace should give some more opportunities for the Chargers offense. Gordon has been a fantastic this season. Despite playing injured for part of the year, he is averaging the second-most DraftKings points at running back and has at least 20 points in every game but one.

Allen is the top target for Rivers, commanding a 28% target share on the year. He has scored a touchdown in two straight games and at least 17 DraftKings points in three straight. Because he plays over 50% of his snaps in the slot, it is likely that he will avoid All-Pro cornerback Patrick Peterson for much of the game. Peterson has played only 1% of his snaps in the slot this year.

It’s unconventional to stack two running backs from the same game, but Leftwich has made Johnson the focal point of the offense again, and it is reflective in his numbers. In the two games since the bye, Johnson has totaled 46 carries and 12 targets. He is responsible for 62% of the total yards gained by the Cardinals. Even playing from behind, Johnson should get enough looks to crush if he manages to find the end zone.