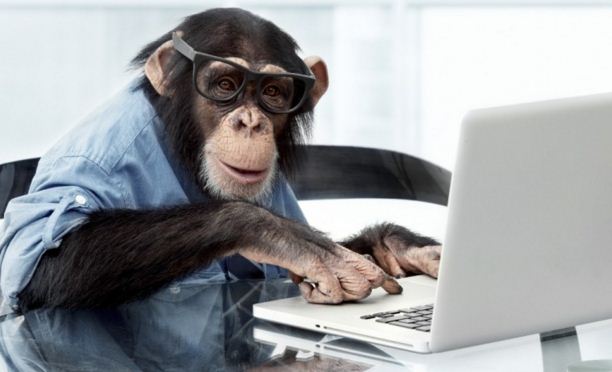 There is a famous probabilistic statement that goes like this:

A monkey hitting keys at random on a typewriter keyboard for an infinite amount of time will almost surely type a given text, such as the complete works of William Shakespeare.

Sound ridiculous enough? Of course, it’s not particularly crazy if you shrink the problem down – if I told you that a monkey on a typewriter spent all day hitting buttons and eventually typed the word “no,” you wouldn’t be very surprised. However, when we extrapolate it out to infinity and use hyperbole with Shakespeare, it becomes a funny problem regarding probability.

I’ve talked before in this space and in this column about probability, and I definitely don’t want to bore you with the same thing. Instead, I want to talk about interpreting data and placing meaning when it’s there or perhaps isn’t.

A lot of people have argued about this monkey problem, mostly because it has been talked about within the context of evolution. The famous contemporary evolutionary biologist Richard Dawkins uses this statement to illustrate the possibility/probability of evolution. Creating complex life from non-complex things is so improbable that it’s mathematically labeled impossible, but when we’re talking about an infinite number of years, isn’t every thing, every mutation, every possibility, well, possible?

On the other side, there have been people who have argued that even if monkeys theoretically could eventually write the entire work of Shakespeare, is it actually meaningful if there was no intent for communication? Does that diminish the brilliance of Hamlet or the popularity of Romeo and Juliet? Is it still beautiful if it’s not intentionally created, if it’s created by random accident or by the nature of mathematics and probability?

I definitely don’t want to go down that rabbit hole of evolutionists versus creationists, but there are some interesting DFS applications here. Notably, what is the meaning of a particular lineup’s success? Does winning mean it was the right play or merely just accidentally ended up that way? Partly, this gets into the skill debate that is a hot-button one in DFS right now – if monkeys can write Shakespeare, is there really any skill to anything? Is creativity and unique thought real?

One thing that this topic has made me think about is that I need to constantly evaluate my lineups, even the winning ones. We often hear that we should judge our losing ones – where did we go wrong?! But we often miss that “process over results” goes both ways. Was our process in losing flawed? Perhaps, and probably so. What about our process in winning? I think that can be flawed as well.

This is probably not a popular opinion, as I’ve seen the mantra of “whatever gets it done” thrown about a lot in the DFS community. And in a sense, it’s not wrong – the goal was to win that particular contest, and it is considered a win even if your lineup was crafted from the precise hands of Shakespeare or the arbitrary banging of monkeys. But, this is important – the latter will be a one-hit wonder, devoid of meaning. Or if I can actually quote Shakespeare: “It is a tale. Told by an idiot, full of sound and fury, signifying nothing.”

If your goal is to just win one contest in DFS and then move on with your life, ignore that last paragraph. But if instead you want to win, and win often, you have to search for meaning instead of randomness. Shakespeare instead of monkeys.

Quick tangent before we end – Dawkins created a program called the Weasel program, where he started with a random order of letters, selected one per “generation,” and showed that by doing so, he could end up with the phrase “METHINKS IT IS LIKE A WEASEL.” Here’s the transcript, just for fun.

There’s probably an article in here somewhere about using this idea in multi-entry GPPs and how to create multiple lineups. We often start with our optimal when we create multiple lineups in tournaments, as opposed to starting contrarian and getting optimal. I have neither the time in this article to get into this nor any answers – I may be making no sense here to anyone but me – but I thought it was an interesting thought process.

Anyway, to conclude, find true meaning in your process and lineups. It’s true that you could very well have the Othello of lineups in a tournament, but how did you get there? Were you Shakespeare, carefully crafting every decision? Or were you merely (no offense to our primate friends, of course) pounding keys hoping to luck upon a masterpiece?