Matthew Stafford: When Should You Fade Him in Fantasy/DFS?

With the NFL Draft and free agency having come and gone, we’ll break down all sorts of fantasy-relevant questions entering the 2018 season. Here we’ll look at whether or not the Detroit Lions’ franchise quarterback is prone to disappointment when he leaves the comforts of the great indoors.

Matthew Stafford entered the league as the first overall pick of the 2009 NFL Draft, and after two seasons marred by injury, he’s gone on to play in seven full seasons, finishing as a top-12 quarterback in all but one of them. Over that span, Stafford trails only Drew Brees in passing attempts, completions, and yards, and also cracks the top five in touchdowns and fantasy points.

Despite Stafford’s relative success as a real-life and fantasy quarterback, some observers are quick to point out a perceived inability of Stafford to take his game outdoors, alleging that outdoor conditions turn him into a subpar quarterback unfit for fantasy lineups.

But are outdoor games actually the right time to fade Stafford in daily fantasy, and should you also be passing over him in traditional fantasy drafts?

Is Stafford Incapable of Playing at a High Level Outdoors?

Before we look at Stafford’s historical performances indoors and outdoors it’s important to have a baseline for what to expect in these situations. Home/road splits are a real phenomenon across the league and something we can measure, as are indoor/outdoor splits. As it relates to Stafford, most of the indoor games he plays are at home, in Ford Field. So when judging whether or not he is hurt by playing outdoors, its important to factor out the home-field advantage aspect. This brings us to his home games, indoor away games, and outdoor away games. Using our proprietary metric, Plus/Minus, enables us to control for factors like opponent and shows how a player performs versus expectation.

Per our NFL Trends Tool, here’s Stafford’s average Plus/Minus versus league average when he plays at home, away indoors, and away outdoors: 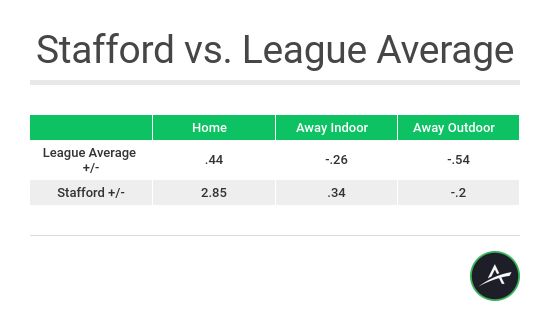 Stafford vs. Brees vs. Ryan

When you take Stafford in a fantasy draft or choose him for a daily fantasy lineup, however, you’re not necessarily interested in comparing him against the league-average quarterback — you want to know how he compares to other high-scoring options at the position. There are only three long-tenured quarterbacks right now that have played all of their home games indoors: Stafford at Ford Field, Brees in the Mercedes-Benz Superdome, and Matt Ryan in the Georgia Dome/Mercedes-Benz Stadium.

Does Stafford hold his own against Brees and Ryan? 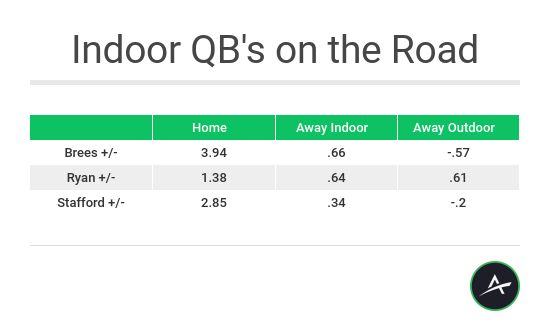 There’s no debate that Brees is the best of the bunch at home, but when he has to leave the Superdome, things can get ugly. Stafford is right in the middle of the three when it comes to home-field advantage, as well as the drop-off from playing outdoors.

And to further dispel the narrative that Stafford is good because of playing indoors, he typically sees less of a boost when traveling to other indoor stadiums than Brees or Ryan.

Stafford’s characterization as an indoor-only passer is rooted in his home/road splits, which happen to align closely with his indoor/outdoor splits. Stafford’s perceived advantage indoors gets confused with the natural home-field advantage that most NFL quarterbacks enjoy, but in reality, the big drop-off in Stafford’s play comes from being a visitor, not playing outdoors.

The Lions added to their offensive line the 2018 NFL Draft with an elite interior prospect in Frank Ragnow, and may have finally found a run-game compliment to their pass-heavy style with second-rounder Kerryon Johnson. Stafford will also have had the chance to build more rapport with promising second-year receiver Kenny Golladay, who should be able contribute to contribute even more to a receiving core that already boasts two pass-catchers with 1,000-yard seasons in Golden Tate and Marvin Jones.

Stafford has been a top-10 fantasy quarterback for four of the past five seasons. Does he struggle on the road like most NFL quarterbacks? Sure. That may be a reason to fade him in DFS in a particular week, but don’t let a misguided narrative scare you off of drafting a consistently high-level performer in redraft leagues.