This piece will identify some of my favorite DFS stacks of the weekend. Be sure to use our Stacking tool found within our Player Models to find the highest projected stacks, the stacks that figure to be chalky, and more. Our Correlation Dashboard is also a great resource to find hidden edges in stacking positions and games.

When I interviewed Jim Sannes of numberFire/FanDuel on the RotoViz Fantasy Football Mailbag, he emphasized that over 25% of last year’s Milly Maker winners won with a DFS quarterback that was a slight road underdog. The logical conclusion is that DFS players default towards the home quarterback in those games with a small spread. We saw this play out again last week, with Minnesota’s Kirk Cousins (QB6) and New York’s Daniel Jones (QB4) both providing a big return on their DFS price tag.

This week, we are double-stacking Atlanta’s Calvin Ridley and Kyle Pitts with quarterback Matt Ryan in that exact same scenario. The Falcons-Giants game has a sneaky 47.5 over/under in a game that is in the shadows of Chiefs-Chargers, Vikings-Seahawks, and Buccaneers-Rams.

The New York defense has been middle of the pack in fantasy points allowed to opposing quarterbacks, despite facing the conservative Teddy Bridgewater and Washington backup Taylor Heinicke. They now face an Atlanta offense that started to fire after a disappointing home opener loss to Philadelphia.

Atlanta hung 25 points on the road against an elite Tampa Bay defense in Week 2. In fact, the Falcons were only down 28-25, heading into the fourth quarter in Tampa. Ryan completed 76% of his passes for 300 yards and two touchdowns. He threw three costly interceptions, but that was against one of the best secondary units in the league.

New York has struggled to create a pass rush in their first two games, generating just 1.5 sacks per game (fifth-fewest in the NFL).

Ridley and Pitts have both started to look better, ranking 16th and 11th respectively at their position in Week 2. This is one of the most consolidated target shares in the league, with Ridley and Pitts combining for 40% of the team’s targets through two games.

The discount on all three of these players allows a ton of latitude at the other positions. Ryan is only the 25th-most expensive quarterback on DraftKings, with Ridley and Pitts both listed as a comfortable eighth at their respective positions. I constructed these two DraftKings lineups using our FantasyLabs optimizer and incorporating a must-use of two Atlanta pass catchers with Matt Ryan.

These teams are 0-2 and should keep a competitive game throughout, which is the exact environment we want for DFS. Consider this double-stack as a great pivot off the other higher-profile games while allowing plenty of room for some higher-priced plays.

With one of the highest game totals of Week 3, it’s very difficult to envision winning any sort of DFS tournament without representation in Chargers-Chiefs. Our choice?  The Herbert-Allen-Hill the QB + WR + Opposing WR stack.

Justin Herbert sees another discount after a disappointing Week 2 game against Dallas. He has plummeted in quarterback price on both sites, ranking as the 12th-most expensive quarterback on FanDuel. Allen also saw a slight dip in price, having not caught a touchdown pass in either of the first two games. Even though teammate Mike Williams has one more target and two more receptions, I’m backing Allen’s history against their AFC West division rival. 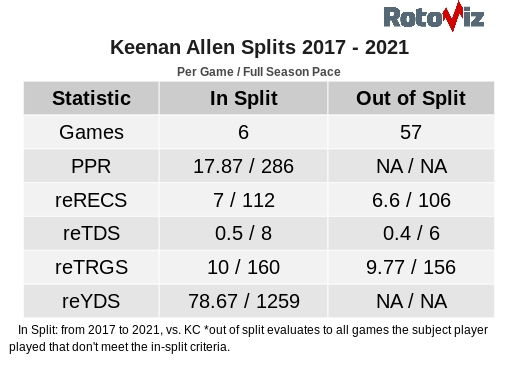 The Chargers’ consolidated target share makes this double-stack easy to love. Williams and Allen have accounted for exactly 50% (43 of 86) of the Chargers targets through two weeks. Los Angeles will face a Kansas City pass defense that has allowed the ninth-most fantasy points per game to opposing quarterbacks, including 114 rushing yards. Herbert’s 4.68 40-yard dash speed could provide sneaky fantasy production as well.

I debated between Tyreek Hill and Travis Kelce as the bring-back pass catcher. I sided with Hill because of his explosive ability on any given play and the Chargers’ historical success as limiting Kelce’s production. In his career 13 meetings with the Chargers, Kelce is only averaging 10 fantasy points per game with just two total touchdowns. 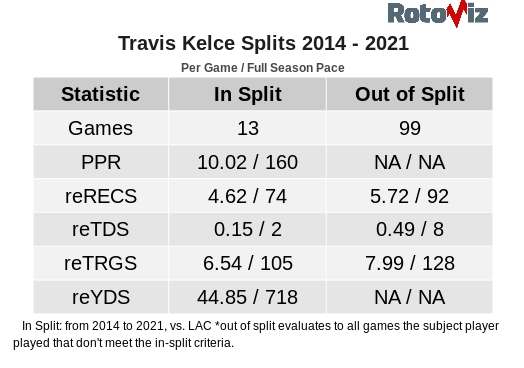 Per the Bales Model, both Allen and Hill rank inside the Top 8 wide receivers in both projected scoring and ceiling.

Using the FantasyLabs Lineup Optimizer, I generated lineups from DraftKings and FanDuel under the following criteria: 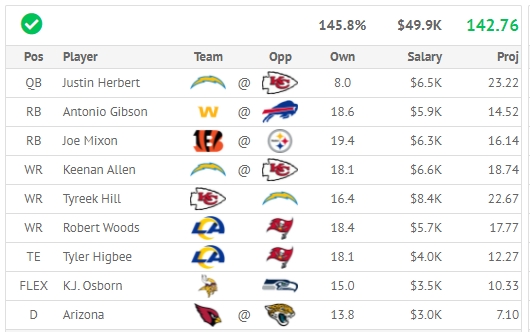 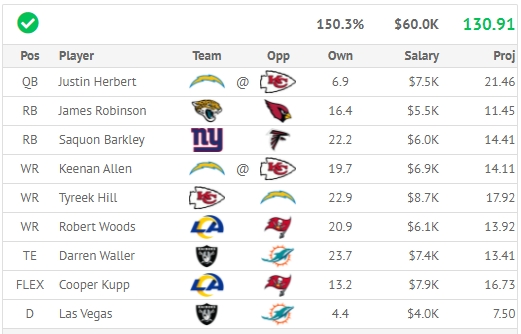 You need exposure to this Chargers-Chiefs game, and Herbert’s discount provides fantastic relief to stack both Allen and Hill from the highest game total on the Sunday slate.

Denver returns to the high altitude of Empower Field at Mile High Stadium to host their home opener against the 0-2 Jets. New York will be led by rookie quarterback Zach Wilson, fresh off a four-interception performance against New England.

Williams saw a slight decrease in snap share but has been more productive than teammate Melvin Gordon in Denver’s 23-13 win at Jacksonville. Williams averaged 4.9 yards per carry, more than double Gordon’s rate (2.4 YPC) on the same amount of carries (13). He is clearly the more efficient runner and has decent ability in the receiving game as well.

Williams will face a New York Jets defense that has allowed the ninth-most fantasy points to opposing running backs, including the third-most receiving yards (140). In a home game with the largest point spread of Week 3, this should be Williams’s best chance to make a fantasy impact. His sub-$5,000 price on DraftKings provides a fantastic value.

I expect Wilson to struggle again in the altitude of Denver against a superior defensive veteran coach in Vic Fangio. The Broncos rank third in yards allowed per game (251.5) and fifth in points allowed per game (13.0). Denver faces a Jets offense that has produced 10 sacks and five interceptions over their first two games.

I produced my favorite Week 3 DraftKings lineup with this stack using the following positional rules on our FantasyLabs Optimizer:

This lineup gives us representation from both Atlanta and Los Angeles while adding two elite receivers in Cooper Kupp and DK Metcalf, with a workhorse running back in Joe Mixon. 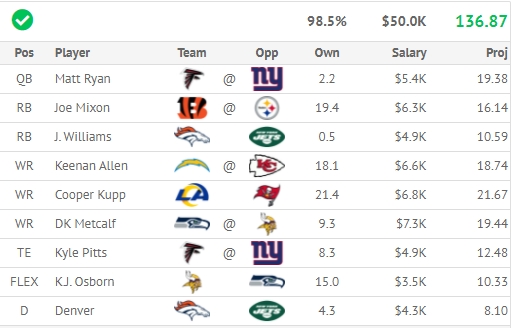 The Broncos defense is the highest-priced on both sites, but that cost is offset by the Williams discount. I project Williams to find the end zone in a game Denver will control throughout, providing nice upside for a rookie running back that is discounted because of the overrated presence of Gordon.