In this piece, I highlight the quarterbacks who stand out in our large suite of analytical DFS Tools, most specifically our FantasyLabs Models, and I include plenty of actionable analysis relevant to season-long fantasy as well.

Odds as of Tuesday night and via DraftKings Sportsbook, where you can get up to a $1,000 sign-up bonus today.

In Week 1, Jackson had 275 yards and three touchdowns on an efficient 20-of-25 passing, and for good measure he chipped in a 7-45-0 rushing stat line as the Ravens piled on the points in a 38-6 victory over the Browns.

No offseason, no problem. Jackson is already in MVP form.

In his 25 career starts, Jackson has averaged an unholy 25.2 FanDuel points per game (including playoffs). No quarterback has provided more value than Jackson has over the past two-plus years with his +6.59 Plus/Minus, and last season he hit salary-based expectations in every game but one.

Only once in 2019 did he fail to finish the week as a fantasy QB1 (per RotoViz NFL Stat Explorer). 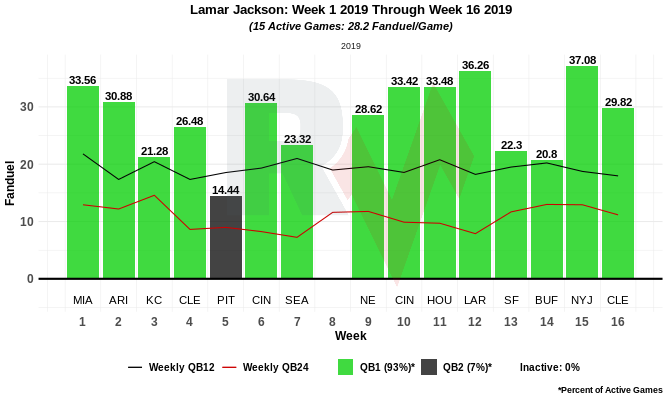 With his Konami Code rushing ability, Jackson’s floor is higher than almost any other quarterback’s ceiling. On his way to an NFL-record 1,206 rushing yards (in 15 games), Jackson handily led the position last season with 11.7 carries and 1.8 red-zone carries per game (per Player Profiler).

The 2019 Ravens averaged an NFL-best 33.2 points per game in the regular season, and although the 2020 team is almost certain to regress, offensive coordinator Greg Roman’s unit should still produce as long as Jackson is healthy.

Jackson led the league with 0.85 FanDuel points per drop back last season (including playoffs) — and that doesn’t include the production he accumulated on all of his designed runs (per Pro Football Focus).

In Week 1, he bumped that mark up to 0.95 FanDuel points per drop back.

This week’s matchup for Jackson is highly advantageous: Last year, the Texans were No. 27 with a 50.3 PFF coverage grade, and when he faced them in Week 11, the result was predictable.

The Ravens have a slate-high 29.5-point implied Vegas total, and as a favorite, Jackson is on the positive side of his career splits (per our FantasyLabs Trends Tool).

Jackson is definitely a candidate for cash games.

For guaranteed prize pools, use our Lineup Builder to stack Jackson with his pass catchers, especially tight end Mark Andrews and wide receiver Marquise Brown. Andrews is always a locked-in top-three fantasy option, and Brown has an A-plus matchup against cornerback Vernon Hargreaves III, who has allowed an unfathomably bad 9.1 yards per target for his career.

For betting, I’m actually backing the Texans: As an underdog, quarterback Deshaun Watson is 12-6 against the spread (ATS), good for a 31.4% return on investment (ROI, per Bet Labs).

Texans head coach Bill O’Brien is 5-0 ATS (99.1% ROI) with 10 days to prepare coming off a Thursday game. But that doesn’t mean I’m fading Jackson in fantasy: He’s the No. 1 quarterback in our Week 2 fantasy rankings.

The top option in the Bales, CSURAM88, Levitan and Freedman Models for FanDuel, Jackson has position-high median and ceiling projections as well as a slate-best +3.92 Projected Plus/Minus.

Mahomes underwhelmed last week on Thursday Night Football, passing for just 211 yards in the season opener — and yet he still threw three touchdowns, completed 75% of his passes and produced a strong 8.5 adjusted yards per attempt (AY/A) as the Chiefs leisured their way to a 34-20 victory against the Texans.

This man is a magician.

The 2018 MVP, Mahomes has an NFL-best 9.2 AY/A since becoming a full-time starter (including playoffs), and in the 29 starts in which neither Mahomes nor No. 1 wide receiver Tyreek Hill has suffered a notable in-game injury, Mahomes has averaged 25.4 FanDuel points, 300.8 yards and 2.72 touchdowns passing and 17.3 yards and 0.24 touchdowns rushing per game.

The dude is a gunslinging highlight reel.

On the road, Mahomes is on the positive side of the reverse splits he has exhibited since 2018.

Plus, it’s not as if there will be any opposing fans in attendance anyway: He’s playing the Chargers. (Burn.)

The matchup isn’t great. PFF has Casey Hayward Jr. and Chris Harris Jr. both as top-six cornerbacks, and they figure to spend much of Week 2 respectively matched up against wide receivers Sammy Watkins and Tyreek Hill.

All-Pro strong safety Derwin James (knee) is on injured reserve, but All-Pro slot cornerback Desmond King II has moved to the position and is now playing something of a Tyrann Mathieu-esque role within the defense. King will likely be the primary defender on tight end Travis Kelce.

This game is not a gimme.

In his 32 regular season games, Mahomes has had negative splits against the divisional rival Chargers (per RotoViz Game Splits App). 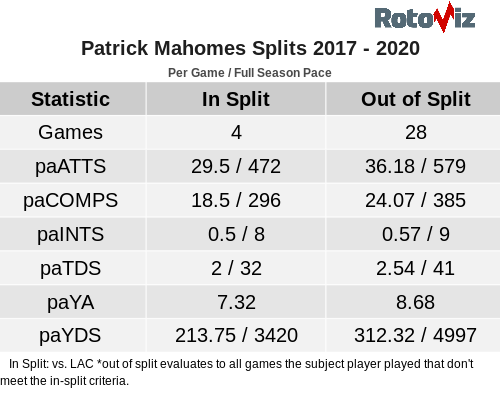 Mahomes isn’t likely to bust, but there’s a sizable risk he could underperform salary-based expectations.

If you have Mahomes in season-long leagues, you’re starting him every week no matter what, and against the Chargers he’s still a top-three fantasy quarterback. But for DFS, he’s better used in tournaments than cash games this week.

Mahomes is the No. 1 quarterback in the Koerner Model for FanDuel.

Last week, Murray took it to the 49ers with a 230-1-1 passing and 13-91-1 rushing performance — he actually hit the 100-yard threshold before losing nine yards on two end-of-game kneeldowns — and he showed an immediate connection with new No. 1 wide receiver DeAndre Hopkins, who was 14-151-0 receiving on 16 targets.

He was No. 6 on the week with 27.3 DraftKings points and has the look of a legitimate NFL quarterback.

But despite his strong performance in Week 1, Murray is somehow $300 cheaper in Week 2. That makes no sense. Priced as the No. 11 quarterback, Murray is No. 6 at the position with his median and ceiling projections.

Thanks to his salary, Murray will be cash-game chalk on DraftKings.

He didn’t set the league ablaze in his rookie campaign, but last year Murray was still a top-12 fantasy quarterback with 19.6 DraftKings points per game, and he had an especially high floor thanks to his rushing workload, as he ranked No. 3 at the position with 5.8 carries and 1.2 red-zone carries per game. 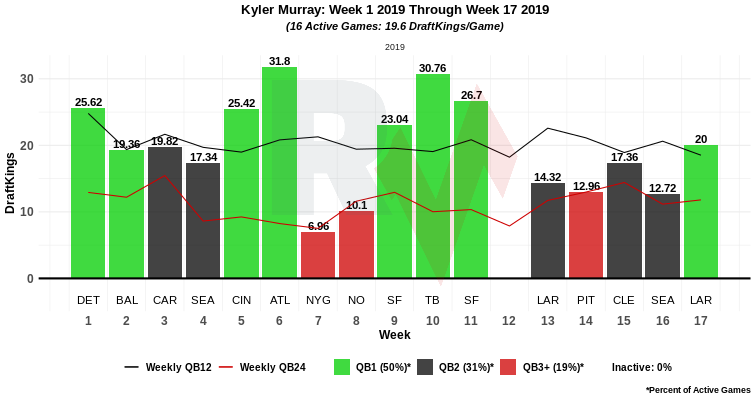 Washington entered the year with PFF’s No. 3 defensive line. The Footballers generate a good pass rush thanks to edge defenders Chase Young, Ryan Kerrigan and Montez Sweat and defensive tackles Da’Ron Payne, Jonathan Allen and Matt Ioannidis: In Week 1, they had a league-high eight sacks on their way to a defense-driven 27-17 victory over the favored Eagles.

The Football Team could get pressure on Murray.

But the matchup on the back end is just so good. No. 1 corner Kendall Fuller (knee) missed Week 1 and is uncertain for Week 2. With him out, Washington is starting three below-average cornerbacks in Ronald Darby, Fabian Moreau and Jimmy Moreland.

A top-five option in season-long leagues, Murray is the unanimous No. 1 option in our Models for DraftKings, where he has a position-high 79% Bargain Rating.

Murray is also the top quarterback in the SportsGeek Model for FanDuel.

I’m a longtime Allen cynic: I compared him to Jake Locker before the 2018 draft. Side note: That’s not a favorable comparison. At Reedley Community College in 2014, Allen had a smogrifying completion rate of 49.0%.

Allen has come a long way since then.

At times, he is hilariously bad. His “lateral” in last season’s playoff loss is the stuff of infamy. Despite his legendary arm strength, Allen was dead last in 2019 with his 28.4% deep-ball accuracy (per PFF). And we still don’t know whether we should call him “Josh” or “Joshua.”

But with the offseason addition of No. 1 wide receiver Stefon Diggs, Allen has all the offensive pieces he needs to be the best possible version of himself — and it’s probably not a coincidence that in Week 1, he had his first 300-yard passing performance in the NFL.

Granted, last week he faced the lowly Jets, who entered the season with PFF’s No. 32 secondary, but don’t act as if what Allen did on the field was nothing.

He finished the week as the No. 3 overall fantasy quarterback.

Also, it’s not as if the Dolphins are much better than the Jets. Last year they were No. 32 with a 43.4% pass-defense DVOA (per Football Outsiders).

With all their offseason additions, the Dolphins still struggled in Week 1, as quarterback Cam Newton put up 25.7 FanDuel points on 155-0-0 passing and 15-75-2 rushing in his Patriots debut.

If a past-his-prime Newton can do that to the Dolphins in his return to action with a new team after almost a year away from the game … what do you think Cam 2.0 can do?

A high-floor option, Allen was the No. 2 quarterback last year with 6.8 carries and 1.4 red-zone carries per game, and since becoming the full-time starter in Week 12 of 2018, he has averaged 21.4 FanDuel points per game in the regular season (excluding last year’s partial Week 17). Even in his embarrassing playoff performance vs. the Texans, he had 25.9 FanDuel points.

A road favorite, Allen is hitting the sweet spot of his splits.

The sample is small, but in Allen’s two games as a road favorite — one of which was against the Dolphins last year — he has averaged 28.0 FanDuel points with a +10.9 Plus/Minus.

A high-end seasonal-league QB1, Allen has No. 1 overall upside for the week and is a strong option in cash games and tournaments.

Allen is the top quarterback in the Raybon Model for FanDuel.

Aaron Rodgers, Green Bay Packers ($6,900 DK, $7,900 FD): Last year the Lions allowed a league-high 503.2 air yards and yards after the catch per game (per AirYards.com), and starting cornerbacks Jeffrey Okudah (hamstring), Desmond Trufant (hamstring) and Justin Coleman (hamstring, IR) are all dealing with significant injuries. Rodgers was the No. 2 fantasy quarterback last week with his 364-4-0 passing performance, and for his career he is 53-30-3 ATS (24.1%) at home in the regular season.

Dak Prescott, Dallas Cowboys ($6,800 DK, $8,300 FD): The Falcons entered the year with PFF’s No. 30 secondary, and then in Week 1 they gave up a league-high 34.8 DraftKings and 31.8 FanDuel points to Russell Wilson. Prescott disappointed last week with a 266-1-0 passing and 3-30-0 rushing performance in his first game with HC Mike McCarthy, but he should bounce back in a game with a slate-high 52-point over/under.

Ben Roethlisberger, Pittsburgh Steelers ($6,300 DK, $7,500 FD): After missing almost all of the 2019 season with an elbow injury, Roethlisberger returned to action in Week 1 with a top-12 performance on 22.1 fantasy points. The Broncos might be without No. 1 cornerback A.J. Bouye (shoulder), and Roethlisberger is at home, where he averaged 25.5 DraftKings points per game in 2013-18.

Gardner Minshew, Jacksonville Jaguars ($5,800 DK, $7,000 FD): Last season, Minshew was No. 5 at the position with 4.8 carries per game and No. 13 with a 7.3 AY/A: He has a reasonable rushing floor and passing ceiling. In his nine career starts as an underdog — including his Week 1 outing with 20.8 fantasy points — Minshew has a 77.8% Consistency Rating, and the Titans are without No. 1 cornerback Adoree’ Jackson (knee, IR).

Matthew Freedman is the Editor-in-Chief of FantasyLabs. He has a dog and sometimes a British accent. In Rosemount, Minnesota, he’s known only as The Labyrinthian.