Week 17 is heavy on news: Within the overall playoff picture, some teams are highly motivated while other teams are likely to rest starters. It’s probable that some players at the top of our Models and rankings early in the week will be much lower by the weekend.

As news breaks and we adjust our projections, where players rate in our Models will change. For updates, visit the Models directly.

Here’s where they place within our Week 17 fantasy football rankings (as of Friday afternoon).

Of these seven, the two who stand out most to me are Waller and Hockenson. The other guys I will highlight as needed in the section on players with week-winning upside.

Waller has a nondescript matchup with the Broncos, who rank No. 19 with a 5.5% pass-defense DVOA against tight ends (per Football Outsiders).

It’s not comforting to know that one of Waller’s worst games of the season came against the Broncos in Week 10, when he was just 3-37-0 receiving on five targets.

But I’m not going to put much weight on just one game, especially when we’re looking at one of the strongest players in the league. Among all tight ends, Waller ranks No. 1 with a 28% target share and 0.60 WOPR.

At the position, Waller trails only Travis Kelce with 105.1 air yards and yards after catch (AirYAC) per game.

But with Kelce expected to rest in Week 17 and George Kittle still easing his way back from a foot injury, Waller is the No. 1 tight end for the slate.

Waller has been at least a fantasy TE2 in all but one game since last season, and more often than not he has been a TE1 (per RotoViz NFL Stat Explorer). 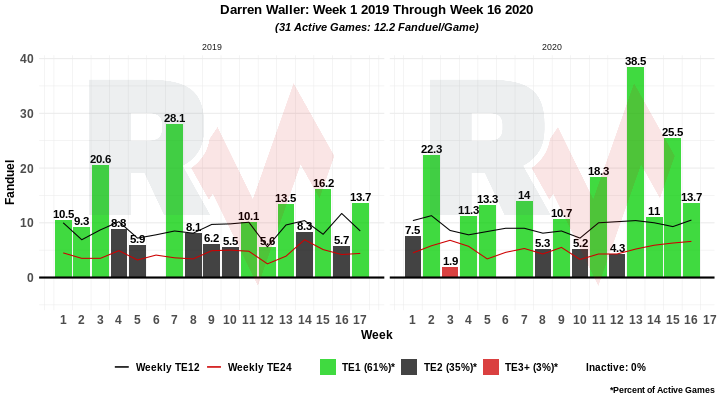 Waller leads all tight ends in our Models with his median, ceiling and floor projections and is the No. 1 option in the Freedman Model for FanDuel, where he has a position-high 96% Bargain Rating.

Quarterback Matthew Stafford (rib/thumb/ankle) is uncertain to play, which makes Hockenson less enticing. Stafford has struggled through injuries for the past two games — he played only four snaps last week — and it doesn’t seem entirely coincidental that Hockenson’s play has dropped off in that timeframe.

Nothing against veteran backup Chase Daniel, but in his 11-year career, the 34-year-old journeyman has thrown a grand total of eight touchdowns and accumulated a mediocre 5.9 adjusted yards per attempt.

Actually, if I read what I just wrote, I do have something against Daniel: He’s not good.

But No. 1 wide receiver Kenny Golladay (hip) is once again highly unlikely to play this weekend, which means that Hockenson could see more than his usual allotment of targets.

Since Golladay suffered his injury in Week 8, Hockenson is No. 4 at the position with 12.0 expected fantasy points and No. 6 with a 20% target share and 0.42 WOPR.

In Hockenson’s 11 games without a healthy Golladay, he has gotten a boost in targets, receptions and yards (per RotoViz Game Splits App). 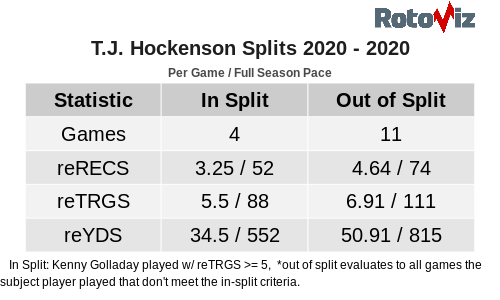 Hockenson’s matchup is meh-tacular. The Vikings have allowed a middle-of-the-road 7.7 fantasy points per game to opposing tight ends units on 67-848-5 receiving.

But it is worth noting that they have struggled against move tight ends with above-average athleticism.

The Vikings aren’t especially exploitable, but they are beatable.

Hockenson is the No. 1 tight end in the Bales, CSURAM88, Koerner and Hodge Models for FanDuel, where he has a position-high nine Pro Trends.

George Kittle, 49ers (+6) vs. Seahawks (46 O/U): The 49ers are without wide receivers Deebo Samuel (hamstring) and Brandon Aiyuk (ankle), and Kittle was 4-92-0 receiving on five targets in his return to action last week. Kittle is No. 2 behind only Travis Kelce at tight end in Hayden Winks’ fantasy usage model.

Mark Andrews, Ravens (-13) at Bengals (43.5 O/U): If you look in The Action Network App, you’ll see that I’m betting on the Ravens, as quarterback Lamar Jackson on the road is 12-5 against the spread (ATS), good for a 39.5% return on investment (ROI, per our Bet Labs database). You can bet on this game at DraftKings.

Mike Gesicki, Dolphins (+3.5) at Bills (42.5 O/U): The Dolphins are fully motivated to win with a playoff spot on the line, and wide receivers DeVante Parker (hamstring) and Jakeem Grant (ankle) are injured, so Gesicki might see extra targets. Since wide receiver Preston Williams (foot, IR) suffered a season-ending injury in Week 9, Gesicki is a team-best 29-367-4 receiving on 43 targets in seven games. Unable to earn the No. 1 seed, the Bills might rest starters for part or all of Week 17.

Smith has battled nagging injuries since Week 6, but he has finally looked healthy over the past two weeks, during which time he is 8-82-1 receiving with a 24% target share and 84% snap rate. Smith is No. 3 at the position with nine total touchdowns. The Texans are No. 31 with a 27.2% pass-defense DVOA against tight ends.

Evan Engram, Giants (+1) vs. Cowboys (44.5 O/U): Even with the Week 7 return of No. 1 receiver Sterling Shepard, Engram is No. 4 among all tight ends with 12.2 expected fantasy points per game and a 24% target share over the past nine games. Last week without slot receiver Golden Tate (calf), Engram was 7-65-0 receiving on 10 targets, and Tate seems unlikely to play this week. The Cowboys are No. 29 with a 24.0% pass-defense DVOA against tight ends. Engram has a position high +3.46 Projected Plus/Minus on DraftKings.

Kmet is just 4-30-0 receiving on eight targets over the past two weeks, but with five targets per game since his promotion, he is a cheap source of sufficient volume.

Dalton Schultz, Cowboys (-1) at Giants (44.5 O/U): In 10 games this year without quarterback Dak Prescott, Schultz has been no worse than a fantasy TE2 seven times. 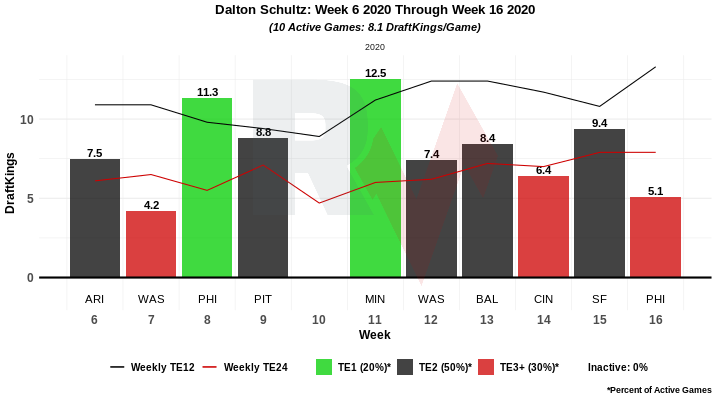 In his 10 Prescott-less games, Schultz has almost as many receptions (37) as wide receivers Michael Gallup (38) and CeeDee Lamb (40) have.

Donald Parham, Chargers (-3.5) at Chiefs (44 O/U): The Chiefs plan to rest key starters, so Parham might face backups for much of the game. No. 1 tight end Hunter Henry (COVID-19) is uncertain to play, and in his absence last week Parham had an acceptable performance.

Sure, he had just three targets last week, but he ran 28 routes, and he could see more targets this week without No. 1 wide receiver Keenan Allen (COVID-19). In the XFL last year, Parham was Nos. 2-3 in the league with 43 targets and 307 yards receiving. The guy can catch the ball. Parham has a position-high +3.19 Projected Plus/Minus on FanDuel.

Trey Burton, Colts (-14) vs. Jaguars (49.5 O/U): Opposing tight ends are No. 2 against the Jags with 10.5 fantasy points per game on 63-816-13 receiving. I would never dream about starting Burton, who is 5-37-0 receiving on nine targets over the past month, but technically he is a tight end facing the Jags. The Colts are in a must-win game to make the playoffs, and Burton has five touchdowns on the season.