Week 17 is heavy on news: Within the overall playoff picture, some teams are highly motivated while other teams are likely to rest starters. It’s probable that some players at the top of our Models and rankings early in the week will be much lower by the weekend.

As news breaks and we adjust our projections, where players rate in our Models will change. For updates, visit the Models directly.

Here’s where they place within our Week 17 fantasy football rankings (as of Tuesday evening).

Of these six, the two who stand out most to me are Jackson and Cousins. The other guys I will highlight as needed in the section on players with week-winning upside. As of writing, I’m skeptical that Allen and Newton will finish the week at the top of our Models, given the potential uncertainty with their Week 17 playing time.

Jackson has two large factors in his favor this week.

First, the Ravens are maximally motivated to win this game. At 10-5, they will seal their spot in the postseason with a victory and risk falling out of the playoffs with a defeat.

So we should see Jackson get his usual playing time.

Second, Jackson has a good matchup against the Bengals, who are No. 27 with an 18.7% pass-defense DVOA (per Football Outsiders). Although he disappointed against them in Week 5 with 180-2-1 passing and 2-3-0 rushing, that came in a 27-3 blowout in which his services were hardly needed.

Last year, Jackson was 459-3-0 passing and 26-217-2 rushing in two games with 30.6 and 33.4 fantasy points against the Bengals. Regardless of whether he actually does go off, Jackson is more than capable of doing so in this game.

And he’s No. 14 with 19.8 expected fantasy points per game (per RotoViz NFL Player Statistical Summary).

In every way possible, Jackson has regressed this season. Year over year, he has seen significant declines in his passing and rushing fantasy points over expectation per attempt (paFPOEPA and ruFPOEPA, per RotoViz Screener).

On average, each time Jackson attempts a pass or rushes the football, he underperforms relative to the outrageous marks he set last year.

But Jackson is not playing poorly. He’s still exceeding the league-average efficiency expectations of the position.

Since becoming a starter in Week 11 of 2018, Jackson has been no worse than a fantasy QB2 in every game (per RotoViz NFL Stat Explorer). 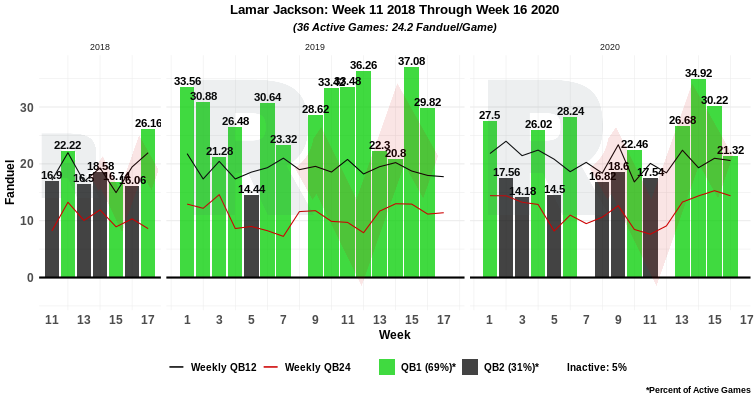 In 69% of his starts, Jackson has been a fantasy QB1. Nice, right? That number is incredibly elite. With his rushing ability, Jackson has a nearly unrivaled ceiling/floor combination.

And since returning to action in Week 12, Jackson is No. 2 behind only Josh Allen with his 30.0 fantasy points per game. Perhaps over the past month Jackson has found his 2019 form.

Full disclosure: If you look in The Action Network App, you’ll see that I’m betting on the Ravens, as Jackson on the road is 12-5 against the spread (ATS), good for a 39.5% return on investment (ROI, per our Bet Labs database). You can bet on this game at FanDuel.

It’s just icing on the cake that Jackson is on the positive side of his career favorite/underdog splits (per our FantasyLabs Trends Tool).

Throughout our entire FantasyLabs database, no quarterback as a favorite has been more productive than Jackson.

Plus/Minus is a proprietary FantasyLabs metric that measures production adjusted for daily fantasy salary. Consistency Rating measures the percentage of games in which a player meets salary-based expectations.

Jackson leads all quarterbacks in our Models with his median and ceiling projections and is the No. 1 option in the Freedman Model for FanDuel.

Cousins isn’t sexy, but he doesn’t have to be with his matchup against the Lions, who are No. 32 with a 29.4 coverage grade (per Pro Football Focus).

What really makes the matchup pop is the health status of the Detroit cornerback unit: The Lions are significantly injured at the position. No. 1 cornerback Desmond Trufant (hamstring, IR) and No. 3 overall pick Jeffrey Okudah (shoulder, IR) are both out, which means the Lions are highly vulnerable in the secondary.

In the absence of Trufant and Okudah, wide receivers Justin Jefferson and Adam Thielen have great matchups against cornerbacks Darryl Roberts and Amani Oruwariye.

Roberts is a subpar slot defender who has been forced to the perimeter because of injuries. He has allowed a 70.5% catch rate this year, and last year he was so bad starting for the Jets that they decided to let him leave via free agency this offseason. Think about that: Too bad … for the Jets.

Oruwariye is a second-year fifth-rounder who has allowed 9.6 yards per target for his career. Just last week, he yielded 77 yards on only four targets.

Against these corners, Jefferson and Thielen on their own could gift 250 yards and two touchdowns to Cousins.

It’s easy to mock Cousins for lackluster performance, but he does have a career-high 32 touchdowns passing this year, and only Aaron Rodgers has more games with three-plus touchdowns passing than Cousins has with seven. As it happens, one of those games was against the Lions in Week 9.

In 9-of-15 games this year, Cousins has had 20-plus DraftKings points. 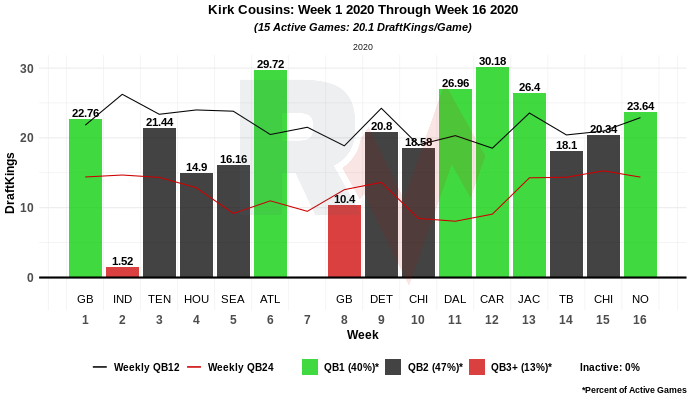 Cousin is the No. 1 quarterback in the SportsGeek and Freedman Models for DraftKings, where he has a position-high five Pro Trends.

Deshaun Watson, Texans (+7.5) vs. Titans (56 O/U): Even without wide receivers Will Fuller (suspension), Randall Cobb (toe, IR) and Kenny Stills (released), Watson has averaged an MVP-esque 9.4 adjusted yards per attempt (AY/A) over the past four weeks. In the 11 games since head coach Bill O’Brien’s termination, Watson has averaged 306 yards and 2.2 touchdowns passing. The Bengals are No. 30 with a 26.7% pass-defense DVOA.

Rodgers is now a -385 MVP frontrunner at DraftKings.

Justin Herbert, Chargers (-3.5) at Chiefs (44 O/U): The Chiefs plan to rest key starters, so Herbert might face backups for much of the game. In his first career start, Herbert was 311-1-1 passing and 4-18-1 rushing against the Chiefs in Week 2. Herbert is a -1200 favorite at FanDuel to Win Offensive Rookie of the Year.

Ryan Tannehill, Titans (-7.5) at Texans (56 O/U): It’s easy to overlook Tannehill because he’s not the focal point of his offense, but in his 28 starts with the Titans, he has passed for 300 yards or accounted for multiple touchdowns in all but two games. In Tannehill’s 25 regular-season starts with Tennessee, the over is 20-4-1 (61.5% ROI).

You can bet on this game at DraftKings. The Texans are No. 29 with a 26.2% pass-defense DVOA. The Titans have a slate-high 32-point implied Vegas total.

Philip Rivers, Colts (-13.5) vs. Jaguars (49.5 O/U): I’m not going with Rivers, because I hate having my Sunday afternoons ruined, but Rivers did have 363 yards passing against the Jags in Week 1. The Jaguars are No. 31 with a 33.1 PFF coverage grade and will be without starting cornerbacks C.J. Henderson (groin, IR), Sidney Jones (Achilles, IR) and D.J. Hayden (hamstring, IR).

Drew Lock, Broncos (+2) vs. Raiders (49.5 O/U): The Raiders are No. 30 with a 35.0 PFF coverage grade. If I had something positive to say about Lock’s performance this season, this is where I’d put it. Here would be perfect. Lock has a position-high +4.63 Projected Plus/Minus on DraftKings.