Two years ago, I introduced the Vegas Bargain Rating (VBR) metric to identify discrepancies between DraftKings PGA salaries and odds to win a tournament. Such a metric is valuable because DraftKings weighs player odds heavily in its pricing. Take a look at the correlation between salaries and odds for this week’s Phoenix Open: 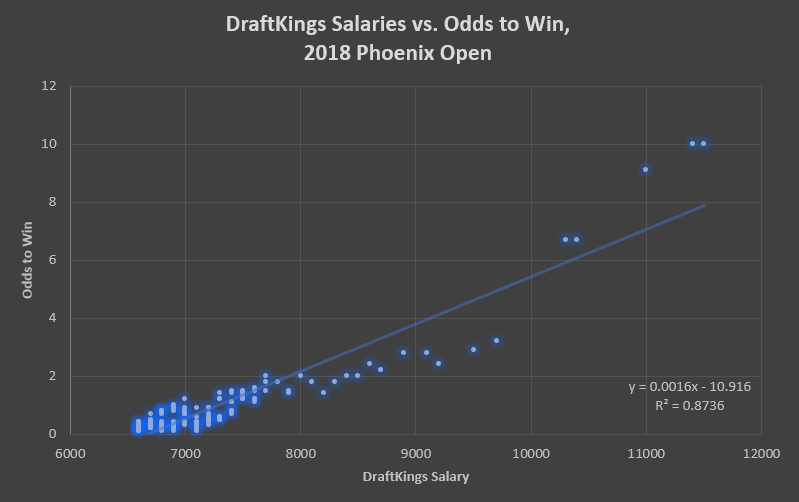 The r-squared value of 0.87 is very high and suggests that DraftKings prices players largely by their odds to win. That’s useful information because it’s not a perfect 1.0 correlation. There are outliers, and identifying those can help us find value in our quest to roster the winner of the tournament. And that’s useful because daily fantasy golf guaranteed prize pools (GPPs) are massive these days. If you want to take down a top-heavy GPP, you almost always have to roster the tournament’s winner. The VBR metric can help you find golfers who are cheap relative to their odds of winning.

To calculate VBR, I find a line of best fit (shown above), ‘predict’ what a player’s salary would be if there were perfect correlation, calculate the difference between predicted salary and real salary, and then reset everything to an easy-to-understand 0-to-100 scale.

We can do the same exercise for golfers on FanDuel, where the r-squared value is lower than on DraftKings, but FanDuel VBR is still useful: 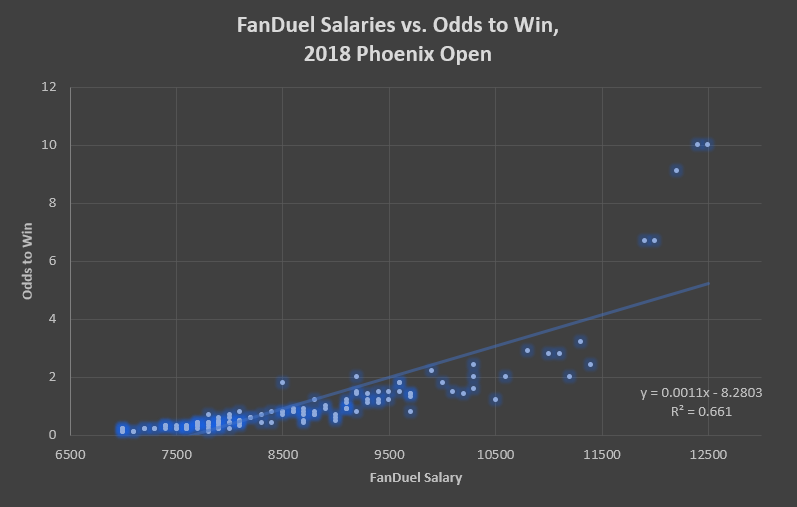 Without further ado, here are the Phoenix Open VBRs for both DraftKings and FanDuel:

The two players with by far the highest VBRs on both DraftKings and FanDuel are Hideki Matsuyama and Jordan Spieth. They lead the field with 10.0 percent implied odds to win, which, according to our regression formula, should put them at about $13,100 on DraftKings and $16,600 on FanDuel. They’re pricey this week, but not that pricey.

Put simply: The top players are underpriced relative to their odds to win the tournament. If you want to maximize your odds of rostering the winner in your lineup, and you should definitely do so in top-heavy tournaments, your best bet is to roster the studs. Of course, ownership projections matter, and often the top guys are highly-owned. Matsuyama, for example, should be incredibly popular this week given his stupid-good course history:

Jon Rahm last week had the highest VBR for both sites, but he was also the chalk. Jason Day, however, was highlighted in this piece as having the second-highest VBR, and he came with much lower ownership: He was in less than 14 percent of contests across all major DraftKings tournaments. Guys like Spieth and Rahm — who has the third-highest VBR this week — won’t be contrarian, but they could be much less popular than Matsuyama given his course history here at TPC Scottsdale. It still makes sense to go stars and scrubs in tournaments, but it could be a week to pivot off the chalkiest one.

Finding Mispriced Golfers According to Talent

You can do the same exercise outlined above for a variety of metrics: Find which players are the best ‘values’ relative to their course history, their birdie-making ability, or their long-term talent. Let’s touch on that last one. We can use our signature PGA metric, Long-Term Adjusted Round Score, as a proxy for talent. It is defined as the averaged adjusted strokes per round over the past 75 weeks; adjustments are made to account for the difficulty of the course and the strength of the field.

Poor Francesco Molinari cannot get a price hike on DraftKings. He is one of the best golfers in the world, and yet he remains just $7,300 on that site. He’s averaged a solid +9.47 Plus/Minus over his past 10 tournaments, and he has a top-25 in his only visit here in 2015. While his salary is tied for the 43rd-highest mark, his Long Term Adjusted Round Score of 68.8 is the eighth-best mark in the field. He has a superior score to someone like Daniel Berger, who is $9,500. The pricing of Molinari remains ridiculous, and he should be easily in the cash-game mix until he sees a dramatic increase.

Two other guys that stand out are Chez Reavie and Kyle Stanley. On this week’s PGA Flex podcast, we debated what was more important: Excellent recent play or excellent course history. These two players will test that question, as Reavie and Stanley have been elite of late, averaging Plus/Minus values of +16.07 and +18.38, respectively, over their past 10 tournaments. Both players have exceeded salary-based expectations in nine of those 10 outings. They have poor history here — Reavie, for instance, has missed the cut in each of the past three years — but they’re in great form at the moment and seemingly fit the course very well. If the public decides course history is more important than recent play, this could be an intriguing buy-low spot for the talented ball-strikers.