Playoff Outliers: Why History Favors the Unbalanced Jaguars and Patriots

Does it really though? What about when a team has a historically great offense? Is there a minimum threshold of offensive or defensive performance a team has to hit in order to be legitimate Super Bowl contenders? Let’s find out.

In this study, I went back to the 1990-1991 season — when the NFL playoffs went to 12 teams — and looked at every playoff team’s offensive and defensive DVOA from Football Outsiders. I used that sample to analyze just how important offensive versus defensive performance is — or perhaps a balance of both is necessary? — and what it means for our 2017-18 crop of teams.

The graph below first shows all playoff teams since that 1990-1991 season and how they ended the season in terms of offensive and defensive DVOA. The Super Bowl champs are in red. The next chart (use the drop-down menu) shows only the past 17 Super Bowl champs, and the final one shows those past champs plus this year’s playoff teams.

Of the top-five strongest defenses in this sample — ’02 Bucs, ’08 Steelers, ’08 Ravens, ’13 Seahawks, and ’15 Broncos — four won Super Bowls and the other (Ravens) lost in the AFC Championship game to those Super Bowl-winning Steelers. Predicting Super Bowls isn’t an exact science, but if you own a historically great defense, you have a very strong chance of winning the Super Bowl.

Of the top-five strongest pass defenses — ’02 Bucs, ’09 Jets, ’13 Seahawks, ’91 Saints, and ’08 Steelers — three won championships, one lost in the conference finals, and one lost in the Wild Card round. There seems to be a weaker correlation between success and run DVOA on defense: Of the top-five strongest rush defenses — ’00 Ravens, ’14 Lions, ’95 Chiefs, ’10 Steelers, and ’08 Ravens — only one won a championship, and only one other even made it to the Super Bowl. As pass offenses have gotten better, pass defenses have become more important to winning in the NFL.

Interestingly, despite the extreme examples listed above, offensive prowess has a stronger correlation with playoff success than defensive aptitude.

Still, looking at the outliers is valuable — teams are trying to win the whole damn thing, after all — and perhaps the sample is brought down by wild-card weaklings who have no real shot at winning a Super Bowl (no offense, Titans). When you remove the teams that lost on wild-card weekend from the sample, the overall correlation marks go down, but it’s a more even split between offense and defense:

This perhaps suggests that offense plays an important role in getting to the playoffs, but defense is more important as rounds progress.

The Patriots own the league’s top offense this season, ranking first in total DVOA, first in pass DVOA, and third in rush DVOA. They don’t have a huge offensive weakness, especially with the recent emergence of Dion Lewis and a Tom Brady–Rob Gronkowski duo that continues to be one of the most unstoppable combinations in the history of football. With that said, the Patriots also rank 31st in defensive DVOA on the year, and history suggests you have to be otherworldly on offense to overcome such a bad defense. Out of the 324 defenses in the sample, this Patriots version ranks among the 20 worst; they were around the bottom-10 before Week 17. Among that sample, only one team made the Super Bowl — the ’11 Patriots, who gave up 21 points to a mediocre Giants offense that finished the regular season 9-7. Most teams lost early on.

This isn’t to say that the Patriots can’t win this year’s Super Bowl. Their big defensive weakness is stopping the run, and that’s less of a problem if an offense can get up early and funnel the opponent’s production toward their more-talented secondary. Still, this is a big weakness, and the data doesn’t lie: If the Patriots win this season, they will be the worst defense since that 1990-1991 season to have done so. 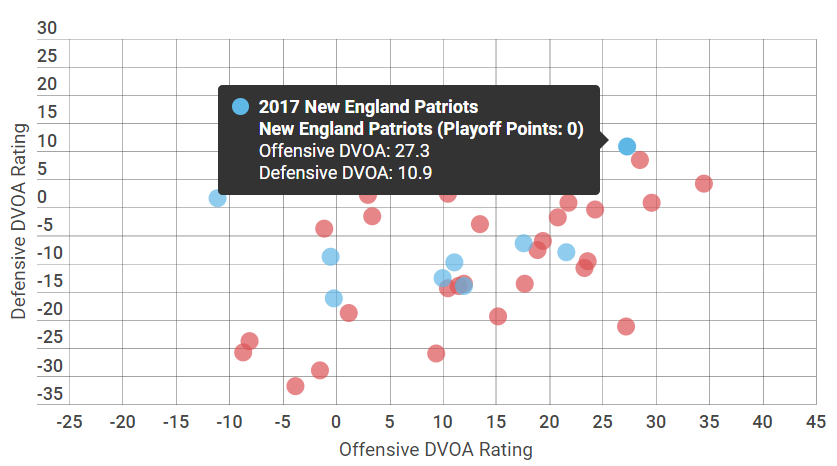 The Jaguars are interesting for the opposite reason. They own the league’s top overall defense this season, allowing 16.1 percent less production than the league-average unit. The Jaguars rank first by a mile in pass DVOA, although they do seem to have a Patriots-like weakness, ranking 26th in defensive rush DVOA.

However, it’s fair to wonder just how much of an issue that really is. The Jags acquired run-stopper Marcell Dareus during the middle of the season, and they have interesting splits with him. They have allowed 15.7 points per game in seven games without him and 17.6 in nine games with him, although that latter number is very inflated by Jimmy Garoppolo dropping 44 on them in Week 16. Take that game out of the sample, and they’ve allowed 14.3 PPG otherwise. It’s not fair to cherry-pick the sample like that, but it does show their potential without one bad game (in which they didn’t have a lot to play for). Even with that game, they’ve allowed 138.6 rushing yards per game without Dareus and 98.9 with him. Each of their three worst rushing performances allowed this season came before they acquired him.

This seems trivial, but it could be the key to the 2017-18 Super Bowl. I mentioned above that history’s best defenses have historically won championships and lots of them, but the Jags don’t quite belong in that group — yet. Their total defensive DVOA would rank around 40th in the 324-team sample, but that’s mostly because of their run defense. Their pass defense is in the top tier, ranking about 10th in the sample. Of the top-15 pass defenses since the 1990-1991 season, seven won Super Bowls and three more lost in the Conference Championship. Elite pass defenses do well in the playoffs regardless, and ones that don’t have a weak run defense or offense (Jags are probably good enough in this regard, ranking 16th in offensive DVOA) often go very far. That’s the biggest question of the playoffs, in my personal opinion: If the run defense can shape up, the Jags should be considered one of the most serious threats to win this whole thing.

The Rest of the Group

Super Bowl teams don’t always some from the outlier, dominant teams, so balanced squads like the Rams, Eagles, Vikings, Steelers, and Saints definitely deserve consideration. (If you look at the picture above, these teams all fall squarely in the middle of the chart.) But consider: When I combined offensive and defensive DVOA to find the historical playoff teams with the best combination, the correlation with playoff success wasn’t significant. Of the top-five teams in this regard — ’91 Redskins, ’07 Patriots, ’95 49ers, ’10 Patriots, and ’09 Packers — only Washington won the title. Teams with dominant aspects — like the historically great ’02 Bucs defense — saw greater ceiling success despite having some warts in other areas.

For that reason, it makes sense that the Patriots are currently the favorites at +210 to win the Super Bowl. However, with only the eighth-best odds at +2200, the Jaguars seem like an undervalued team entering the playoffs.