This week’s Tour Championship is unique in that it includes just 30 golfers and therefore will have no cut on Friday. It’s the final tournament of the FedEx Cup Playoffs.

Given the smaller field and no cut, does PGA DFS strategy change? Absolutely. Here are a couple things to keep in mind when constructing lineups over the next two weeks.

With no cut, every player is guaranteed four rounds and 72 holes of golf. That removes one of the biggest potential edges in PGA DFS — identifying rosters that have a good chance of getting all six across — and makes it so scoring is the only thing that matters.

And the scoring on DraftKings is important to note:

You’ll notice it’s not a linear scoring system: A birdie and a bogey on consecutive holes don’t cancel out your DraftKings points; you’re still up 2.5 points in that situation.

That’s a massive difference, and think about that across four rounds. It’s conceivable two players could be tied on the leaderboard but very far apart in fantasy scoring.

That means you should target guys who can make birdies or better. Ignore bogeys.

An example of this is Jon Rahm vs. Rory McIlroy. Over the last 75 weeks, Rory has averaged 16.1 birdies and 7.6 bogeys per tournament. Rahm, meanwhile, has averaged 16.2 birdies and 8.6 bogeys. Rory has superior long-term overall marks, but Rahm is right there with him in terms of scoring — he just struggles with bogey avoidance. That’s OK this week, though, and it could mean Rahm could be undervalued in these small, no-cut events.

One other note: I’m possibly alone in this, but I actually like to look at eagle or better percentage. I think it’s a really good proxy for upside in a way that other stats can’t quite capture. Sure, guys who hit the ball a long way theoretically have more upside because they’ll have shorter approach shots, but that doesn’t bear out for a lot of golfers. Guys who consistently are making eagles are ones with excellent upside — golfers who can put the whole game together and score in a big way.

It’s always wise to be contrarian in PGA DFS given how volatile and random it can be on a week-to-week basis, but that’s especially true in small, no-cut events where ownership can be even more concentrated. Take last year’s Tour Championship, for example: Nine of the 30 players were over 25% owned; four were over 33%. Tony Finau led the field with a 38.4% ownership rate in the large-field $6 tournament.

No player is going to be super low-owned in a field that small, but you can still find high-upside guys lower down the board. It is the top-30 players in the world, after all. Hideki Matsuyama, for example, was in the winning lineup as a top-five scorer but was just 14.4% owned — one of the lower marks of the week.

One potential way to be contrarian is to simply not use of the entirety of your salary. Here was the breakdown of salary distribution for last year’s BMW Championship: 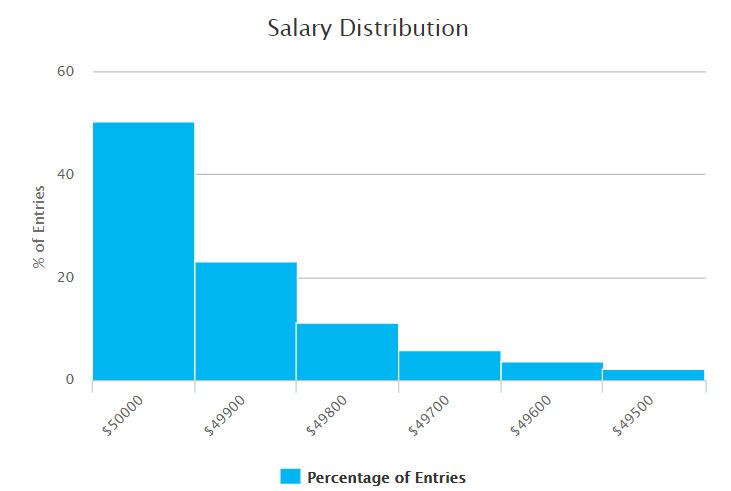 Over half the field used up the entire $50,000! Simply going down $100 on a single player dropped it down to 23.1%, which greatly increased those users’ odds of not having a duplicate lineup. The difference in $100 — especially in a volatile sport like PGA DFS — is nonexistent. Don’t be afraid to not max out your salary.

I know what you might say next, though: “But the winning lineup used $50k, and that happens often.” There’s a lot of biases in play with that logic, but I’ll say it’s not a good argument given that most of the field used the full salary cap. It’s not surprising that the winner came from that huge chunk. What would be surprising is if that chunk consistently held the highest collective ROI. I would guess not over the long-term.

Again: Don’t be afraid to drop down in salary — even several hundred dollars.

This last point may seem different, but it’s really the same as being contrarian. In a no-cut, small event, you almost certainly need to have the winner of the tournament on your team if you want to take first in a GPP. That would potentially set you up for a stars-and-scrubs lineup approach, as the most-expensive golfers are the ones who have the highest Vegas odds of winning. DraftKings and FanDuel salaries are almost perfectly correlated every week with odds to win.

But it really depends on the week. If the public is going to roster the top-three guys in salary at a super-high rate, it’s still wise to fade them. After all, even the favorite of a golf tournament is still 8/1 to win on a great week.

The best spot is to find golfers with high odds to win and high upside but low ownership. Those guys will differ in every small, no-cut tournament from here on out, but they’ll exist for each one. For example, maybe Rory, DJ and Brooks Koepka are massively owned at the Tour Championship. That means there’s likely value on guys like Justin Thomas and Jon Rahm.

You need to roster the winner, but don’t overestimate the top guys at the expense of contrarian-ness. Remember the wisest words in all of DFS land: The goal is to win the tournament — not to optimize your roster.