Week 13 Fantasy TE Breakdown: Tyler Higbee for All the Money

The Week 13 NFL main slate kicks off on Sunday, Dec. 1, at 1 p.m. ET. In this piece, I highlight the tight ends who stand out in our large suite of analytical DFS Tools, most specifically our industry-leading FantasyLabs Models.

Odds as of Friday afternoon and via PointsBet, where Action Network users can access an exclusive promotion to get a 200% deposit match (deposit $50, bet with $150). No strings attached. No rollover required.

I love this spot for Kelce. I typically don’t like to pay up for a tight end in cash games, but this week I might consider it for Zeus, and he’s always an option for guaranteed prize pools.

In 2018, Kelce had a historic fantasy season for a tight end. And his 2019 season has gone pretty well so far. He’s had 50-plus yards in every game but one. He’s No. 1 at the position with 101.9 air yards and yards after the catch combined per game (per AirYards.com).

Kelce has been a fantasy TE1 almost every week (per the RotoViz NFL Stat Explorer). 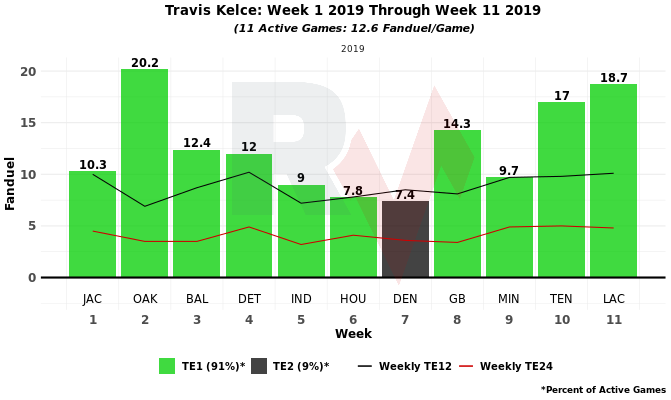 And yet it’s undeniable that Kelce’s campaign has disappointed. Even though wide receiver Tyreek Hill missed most of the first five weeks of the season, Kelce has so far seen fewer targets per game this year than he saw last season (9.2 vs. 8.3, including playoffs).

With fewer opportunities, his year-over-year performance has declined (per our FantasyLabs Trends Tool).

But Kelce’s issues are starting to sort themselves out. His primary problem this year has not been his colume or yardage: 8.3 targets per game is still a high number for a tight end, and Kelce’s 9.2 yards per target is right in line with his 2016-18 mark of 9.0. The problem is that in Weeks 1-7, Kelce scored just one touchdown.

Coming off the bye, Kelce should be rested and ready.

Most importantly, Kelce has a great matchup. The Raiders are No. 30 in pass defense DVOA (per Football Outsiders) and have allowed the fifth-most FanDuel points to tight ends with 11.9 per game.

In his three games against the divisional rivals Raiders with quarterback Patrick Mahomes, Kelce has outperformed his already lofty standards (per RotoViz Game Splits App). 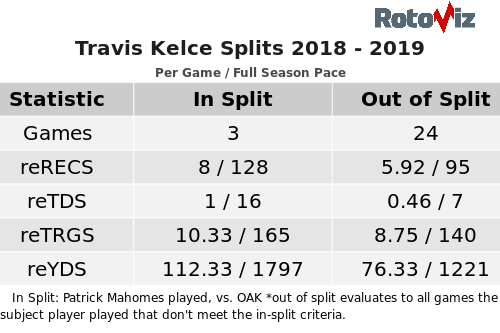 Averaging 20.6 FanDuel points per game, Kelce has provided incredible value with a +9.01 Plus/Minus when facing the Raiders.

Again, this is a great spot: Kelce has position-high median and ceiling projections in our Models.

Kelce will popular in GPPs, which makes sense: The Chiefs have a slate-high 30.5-point implied Vegas total. If you roster Kelce, be sure to differentiate your lineups elsewhere.

Kelce is the No. 1 tight end in the Bales, Levitan, Koerner, SportsGeek and Freedman Model for FanDuel, where he has position-high marks with a +3.56 Projected Plus/Minus and 99% Bargain Rating. He also is the top option in the Bales Model for DraftKings, where he leads all tight ends with seven Pro Trends.

Henry has been a hard-luck kind of guy for most of his career.

After winning the 2015 John Mackey Award as the top college tight end, Henry entered the league as a potential-laden second-rounder but was forced to spend the first two years of his career in a timeshare with long-time franchise fixture Antonio Gates.

Entering 2018, finally free of the stench emanating from Gates’ jettisoned corpse, Henry was poised to break out — and then he suffered an ACL tear in the preseason. His campaign was done before it even began.

And then in Week 1, he suffered a knee injury near the end of the game. He wasn’t expected to return till late in the year.

But amazingly Henry returned to action in Week 6, and has since lived up to the hype. For the year, Henry is the No. 3 fantasy tight end with 15.8 DraftKings points per game, and he’s No. 2 at the position with 100.4 air yards and yards after the catch per game.

In his seven games this year, Henry is the Chargers’ leading receiver with 487 yards.

The Broncos have had a relatively easy schedule against tight ends, but the two players most similar to Henry to play them this year — Kelce and Waller — have averaged a respectable 12.2 DraftKings points per game. The Broncos can be exploited.

Henry is the No. 1 tight end in the Raybon Model for DraftKings, where he trails only Kelce with six Pro Trends.

Waller is an intriguing option. Playing in the same game as Kelce, Waller could have anywhere from one-half to one-quarter of his higher-priced peer’s ownership rate, which makes him a desirable pivot play. Also, because of their position and salaries, Kelce and Waller aren’t all that likely to be stacked together, but Raiders-Chiefs has a slate-high over/under, and if this game shoots out, then both Kelce and Waller could go off.

But the past five weeks haven’t been so good. Since wide receiver Tyrell Williams returned from injury in Week 8, Waller is No. 1 on the team with 5.6 targets per game, but he’s No. 2 with 68 air yards and yards after the catch and No. 3 with three receptions and 44.4 yards receiving.

And 5.5 targets isn’t all that great anyway.

But the Chiefs have allowed the sixth-most FanDuel points to tight ends with 11.1 per game, and against the Chiefs in Week 2, Waller had a solid 6-63-0 performance on seven targets.

Slot receiver Hunter Renfrow (ribs) is almost certain to be out, and in his absence, Waller seems likely to get more targets, and with increased expected volume, he has position-high floor projections in our Models. And his upside is clear: No tight end has more 100-yard games this year than Waller.

Waller trails only Kelce with eight Pro Trends on FanDuel, where he’s the No. 1 tight end in the CSURAM88 Model.

Even without starting quarterback Cam Newton (foot, IR), the über-Witten continues to produce: Olsen has four fantasy TE1 performances this year, and since the Week 7 bye, he’s averaged six targets, 4.6 receptions and 50.4 yards receiving per game.

Since 2017, when Olsen reached the “Dad Runner” phase of his career, he’s actually been better with backup quarterback Kyle Allen than with everyone else. 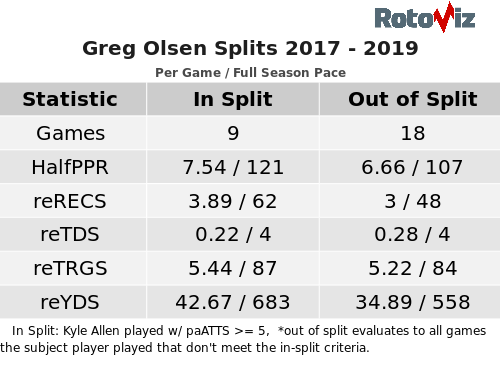 The sample is small, but it’s suggestive: At least for Olsen, the drop-off from Newton to Allen has perhaps been nonexistent.

The matchup for Olsen is great: The Redskins are No. 31 in pass defense DVOA against tight ends. And Olsen is cheap and will likely have a sub-5% ownership rate in tournaments.

Olsen has a strong 0.67 correlation in production with Allen in their nine games together. If you want a contrarian lineup, an Allen-Olsen stack will go a long way to getting you there.

Olsen is the No. 1 tight end in the Raybon Model for FanDuel, where he has top-three marks with seven Pro Trends and a nice 69% Bargain Rating.

Tight end Gerald Everett (knee) is dealing with an injury and has not practiced this week. He seems doubtful to play, and over the past two weeks, he has had low snap rates of 26% and 33%. So even if he does suit up, he could see limited action.

And that makes Higbee a viable option, especially on DraftKings, where he has a stone-minimum salary. Over the past two weeks, Higbee has had season-high snap rates of 76% and 69%, and although he did nothing in Week 11, in Week 12 he had five receptions on six targets.

If Everett is out, Higbee could have similar usage this week, and given his matchup, he could do a lot with that volume. The Cardinals are No. 32 in the league with their coverage grade (per Pro Football Focus), and they are especially poor at defending tight ends, allowing an NFL-high 21.4 DraftKings points per game to the position.

Even with this “flow chart” matchup, can we count on Higbee? I think so.

The Cardinals were on bye last week, but in Week 11, they faced nondescript backup Ross Dwelley, who played in place of the injured George Kittle.

Against the Cardinals, Dwelley had a relatively disappointing 14 yards and four receptions on five targets. Oh, he also scored two touchdowns. Because he was playing the Cardinals. With his 17.4 DraftKings points, Dwelley was a top-six tight end on the slate.

What Dwelley was in Week 11, Higbee is now.

Fade the flow chart at your own peril.

Am I actually thinking about playing Higbee in cash games?

Higbee has a position-high 99% Bargain Rating on DraftKings, where he’s the No. 1 tight end in the CSURAM88, Koerner and SportsGeek Models.

Zach Ertz, Philadelphia Eagles ($6,700 DK, $6,900 FD): Ertz (hamstring) is dealing with an injury and hasn’t practiced this week. I’m skeptical that he’ll play this weekend. If reports indicate that he is healthy heading into the game, then he’ll be an option. Over the past month, he’s averaged 12 targets per game, and the Dolphins are without starting safeties Reshad Jones (chest/ankle, IR) and Bobby McCain (shoulder, IR).

George Kittle, San Francisco 49ers ($6,100 DK, $7,000 FD): After missing two games, Kittle returned to action in Week 12 with position-best 6-129-1 performance on six targets. Even though he’s dealing with a lingering ankle injury, Kittle is still probably the best tight end in the league. He’s No. 2 at the position with 16.1 DraftKings points and No. 4 with 91 air yards and yards after the catch per game. The Ravens have a tight end-flowing pass funnel defense, ranking in the top eight against opposing wide receivers at each cornerback position but No. 20 against tight ends in DVOA.

Mark Andrews, Baltimore Ravens ($5,700 DK, $6,500 FD): Andrews is No. 5 among tight ends with 85.5 air yards and yards after the catch per game, and he leads the team with 73 targets, 50 receptions, 643 yards receiving and six touchdowns. He has a tough matchup against the 49ers, who have held tight ends to a league-low 6.6 DraftKings points per game, and he’s played just 45.9% of the team’s offensive snaps, but Andrews trails only George Kittle at the position with 0.31 target per route and 2.72 yards per route run (per PFF).

Dallas Goedert, Philadelphia Eagles ($4,100 DK, $5,200 FD): No. 1 tight end Zach Ertz (hamstring) seems unlikely to play this week, so Goedert could be in line for a significant usage increase. A top-tier prospect who probably should have been a first-round pick, Goedert is coming into his own in his second season. Since Week 6, Goedert has averaged 11.1 DraftKings points on six targets per game with five fantasy TE1 finishes.

Noah Fant, Denver Broncos ($3,700 DK, $5,100 FD): The rookie is starting to come on. In his four games since the team traded wide receiver Emmanuel Sanders, Fant has averaged seven targets. The Chargers are expected to get back All-Pro safety Derwin James (foot) for this game, but he might be rusty or limited, and with his recent volume, Fant has the potential for a big game.

Jack Doyle, Indianapolis Colts ($3,300 DK, $5,000 FD): Wide receiver T.Y. Hilton (calf) and tight end Eric Ebron (ankle) are out, so Doyle could see extra work. In his four Hilton-less games this year, Doyle has averaged 9.2 points per game on DraftKings, where he has a position-high +2.34 Projected Plus/Minus. The Titans are No. 26 in pass defense DVOA against tight ends.

Kaden Smith, New York Giants ($2,900 DK, $4,000 FD): Starter Evan Engram (foot) and backup Rhett Ellison (concussion) are out, so Smith will once again play almost every snap with the first-team offense. Filling in for Engram and Ellison last week, Smith had a 5-17-1 performance on six targets. The Packers have allowed the third-most DraftKings points to tight ends with 16.3 per game.