We are just three weeks away from the end of the regular season, and the NFL is still on pace for a record-breaking campaign with an average of 23.8 points per game per team. The action continues with an 11-game main slate that kicks off on Sunday at 1 p.m. ET.

UPDATE (12/16): Wide receiver T.Y. Hilton (ankle) is questionable and a game-time decision to play. Right guard Mark Glowinski (ankle) is out after not practicing all week.

Cowboys linebacker Sean Lee (hamstring) is questionable. He hasn’t played since Week 9 but could see action after practicing limitedly all week. Defensive tackle David Irving (ankle) is out. Defensive end Randy Gregory (personal) missed practice on Thursday and Friday with a private matter and is questionable to play.

This slate is thin at the position, so it’s not a surprise that Ebron is popping in a number of our Models. On the Wednesday edition of The Action Network NFL Podcast, there was some enthusiasm for Ebron as a cash-game play this week, and it’s easy to see why.

As absurd as this might sound, Ebron is the No. 2 fantasy tight end on the slate with 13.1 FanDuel points per game. From a salary-adjusted perspective, Ebron leads the position with a +6.17 FanDuel Plus/Minus. After scoring yet another touchdown last week, Ebron now leads all non-running backs with 13 scrimmage touchdowns (12 receiving, one rushing). For the season, Ebron is a close second to wide receiver T.Y. Hilton on the Colts with 96 targets, 58 receptions, 654 yards receiving and 847 air yards.

As has been the case for the past two weeks, tight end Jack Doyle (kidney, injured reserve) is out, and in his absence Ebron has seen a dramatic increase in his per-game usage.

For as good as Ebron has been with Doyle and as heavily as he’s been used without him, it’s possible that Ebron could be even more productive to close the year.

While Ebron’s touchdown-driven production might be a little fluky, his high-leverage usage certainly is not. Ebron is first among all players (not just tight ends) with nine touchdowns on passes into the end zone. He trails only Steelers wide receiver Antonio Brown with his 16 end-zone targets. He’s second with 10 red-zone touchdowns (not counting his two-yard rushing score). And he’s top-eight with 20 red-zone targets.

On top of that, he’s being used as a downfield weapon. Ebron trails only Travis Kelce and Zach Ertz (neither of whom is on the slate) with his 847 air yards, and his 9.0-yard average depth of target (aDOT) suggests that he’s more of a big-bodied slot receiver and less of a tight end. And the numbers back that up. Of all fantasy-viable tight ends, Ebron has run a league-high 62.2% of his routes from the slot. He’s also lined up out wide on 12.3% of his snaps. 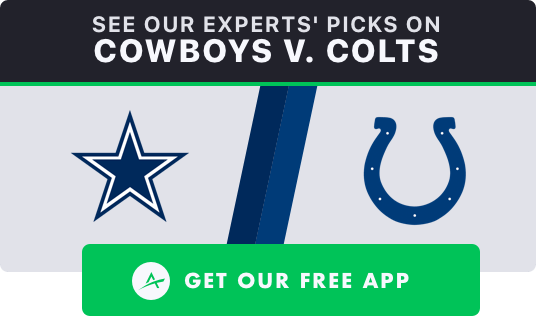 At a glance, Ebron doesn’t have a great matchup against the Cowboys, who rank fourth with an 87.6 Pro Football Focus (PFF) coverage grade. But I’m not too worried. Ebron’s usage should more than compensate for his matchup, which I think shouldn’t be too challenging anyway.

The Cowboys have allowed a middle-of-the-road 11.5 FanDuel points per game to tight ends, and they rank 18th in pass defense against the position with a 4.2% mark in Football Outsiders’ DVOA. Every tight end to score 10-plus FanDuel points against them this year has been at least somewhat comparable to Ebron in athleticism, ability and role.

And the Cowboys have been much weaker against tight ends without linebacker Sean Lee (hamstring), who is questionable to play after missing the past five weeks. Although rookie first-rounder Leighton Vander Esch has been fantastic filling in for Lee as a run defender, he’s allowed an 83.6% catch rate and been targeted a position-high 73 times. And third-year linebacker Jaylon Smith has allowed an 81.3% catch rate. Strong safety Jeff Heath has allowed an 81.1% catch rate.

If Lee doesn’t play — and probably even if he does play — Colts quarterback Andrew Luck has a good chance of completing his passes to Ebron this week.

Even so, I’m all in on Ebron. We’re expecting him to have the highest ownership at the position, so it’s reasonable to fade him in guaranteed prize pools, but I like him a lot in cash games: Based on his consistent end-zone usage and high target volume without Doyle, Ebron has top-three median and ceiling projections in our Models.

On Sunday morning, I will probably look to bet the over on Ebron’s reception total. With his high target volume and the rate at which Vander Esch, Smith and Heath have allowed completed passes, Ebron is in a great spot: The Cowboys have allowed a top-four mark of 5.8 receptions per game to tight ends.

To find the best bets in the props market, use our Player Props Tool, which is powered by our industry-leading projections. Since Week 1, the props with a bet quality of 10 have gone 214-96-11, good for a 67% win rate. Without question, you should supplement your DFS action with player props.

Ebron is tied for a position-high eight Pro Trends on FanDuel, where he’s the No. 1 tight end in the Bales, Levitan, Koerner, SportsGeek and Freedman Models. 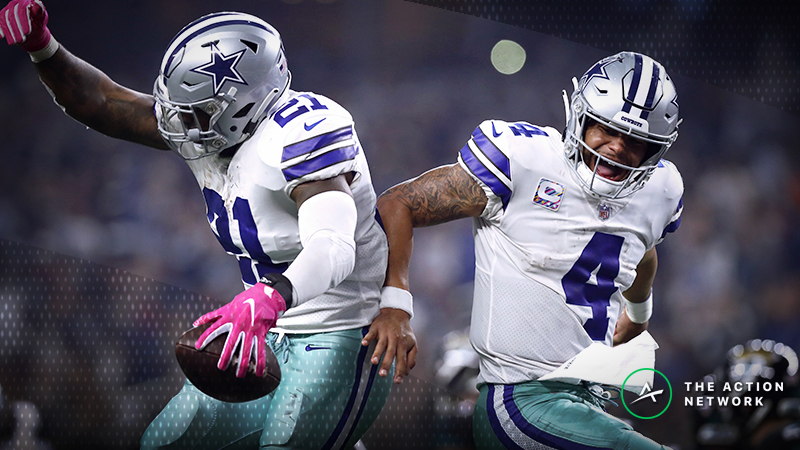 UPDATE (12/16): Right guard Mike Remmers (back) is questionable but expected to play.

Dolphins cornerback Xavien Howard (knee) is doubtful and expected not to play after missing last week and practice all this week. Safety T.J. McDonald (ankle) is questionable but seems likely to play after practicing on a limited basis all week.

If you’re looking to punt the position, especially on DraftKings, Rudolph is someone to consider.

I’m not enamored with Rudolph. He’s most valuable as a touchdown producer, and he hasn’t scored since Week 3, but he’s still easily third on the team with 462 routes, 65 targets, 48 receptions, 470 yards and 427 air yards. Since 2016, he’s been highly competitive with wide receivers Adam Thielen and Stefon Diggs in his touchdown production and red-zone usage. 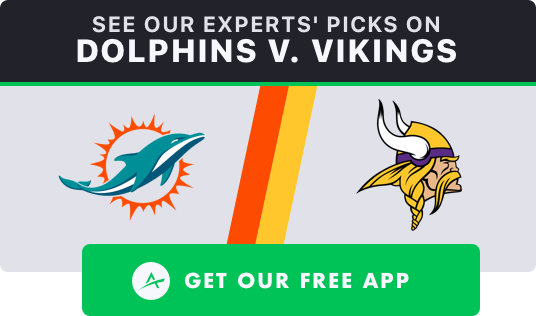 Rudolph’s touchdown equity has certainly declined in 2018 with quarterback Kirk Cousins, but it’s possible that the recent dismissal of first-year offensive coordinator John DeFilippo could improve Rudolph’s prospects. Interim OC Kevin Stefanski was Rudolph’s position coach in 2014-15 and most recently was the quarterbacks coach before his promotion.

Knowing Rudolph as well as he does, Stefanski might funnel a couple more targets per game to Rudolph with his play-calling, especially near the goal line. No team has allowed more touchdowns to tight ends this year than the Dolphins have with nine.

Only once since 2016 has Rudolph been cheaper on DraftKings than he is now ($3,200 in Week 12). Rudolph is the No. 1 DraftKings tight end in every Pro Model except for one (Freedman, of course). 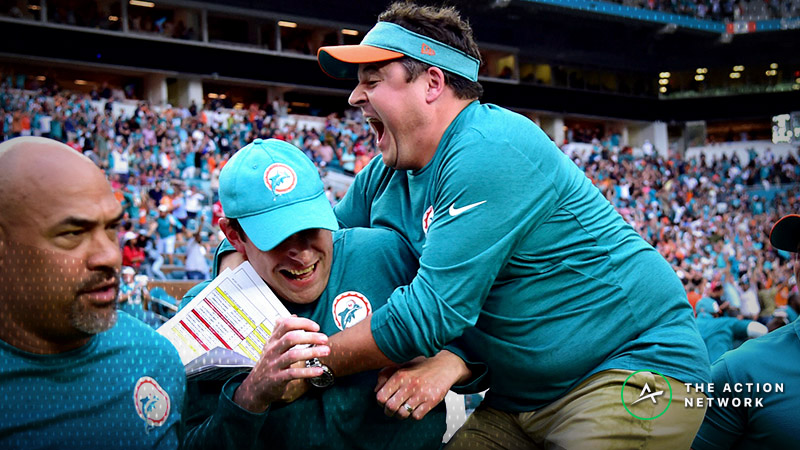 UPDATE (12/16): Wide receiver Josh Doctson (concussion) has cleared the league’s protocol and is likely to play on Sunday. Running back Chris Thompson (illness) missed practiced on Friday and is officially questionable but expected to play.

If you aren’t starting a 34-year-old backup as an injury fill-in a half decade removed from his best season on a team starting a fresh-off-the-street fourth-string quarterback as a big road dog against one of the best defenses in the league in a game with the lowest over/under of the week, then you ain’t L-I-V-I-N, you dig?

Starter Jordan Reed (foot, life) is out, so Davis will play in his place, as he’s done for much of the past three years. As expected, his point-per-reception (PPR) splits without Reed are encouraging (per the RotoViz Game Splits App).

While Reed is a good player, the truth is that Davis has been more efficient with his opportunities over the past three years.

Wide receiver Paul Richardson (shoulder, IR) is out, and wide receiver Josh Doctson (concussion) hasn’t practiced all week and seems unlikely to play. As the team’s primary high aDOT receivers (12.7 and 12.5), Richardson and Doctson might see their deep roles filled by Davis, who has been much more of a vertical player this year compared to Reed (11.5 aDOT vs. 7.0). 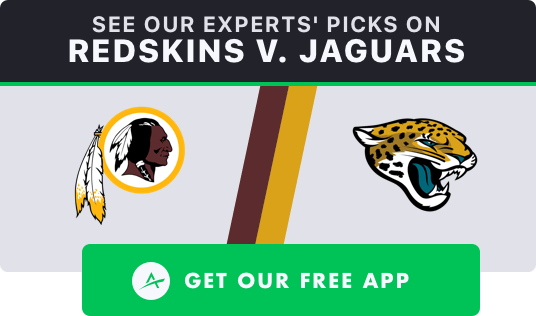 It’s doubtful as to how relevant this is, but in his five career starts (the last of which was in 2011), Josh Johnson threw two of his five touchdowns to tight end Kellen Winslow. Both scores came on passes within the 10-yard line.

The Jags have allowed a top-eight total of seven touchdowns to tight ends this year, they benched and then cut veteran safety Barry Church and now they are starting rookie Ronnie Harrison at strong safety. Harrison was a good player at Alabama, and he could be a good NFL player one day as a third-round pick, but he’s allowed a 75% catch rate in his young career.

The Jags are fifth in defensive DVOA (-8.4%) and are strong on the outside with cornerbacks Jalen Ramsey and A.J. Bouye. It wouldn’t be a surprise if the Redskins chose to avoid Ramsey and Bouye as much as possible and instead attack the Jags defense with their capable tight end.

Davis has a position-high projected Plus/Minus on DraftKings, where he’s the No. 1 option in the Freedman Model.

Be sure to read the other Week 15 positional breakdowns.