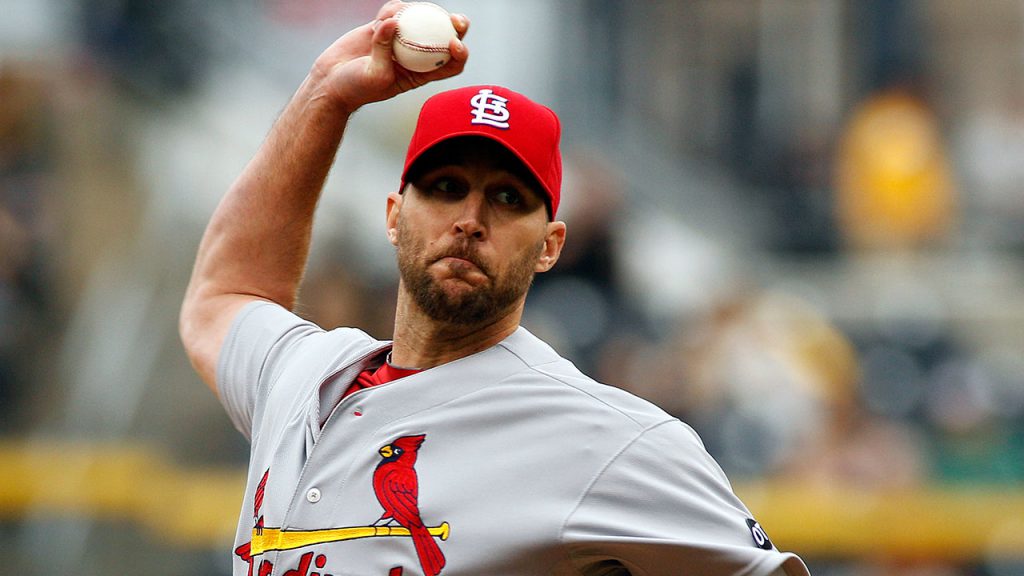 Throughout the season, I am using our FREE Trends tool to create a custom trend, and then I am tracking the results of my matches for the week in this article. The goal is to create trends with high Plus/Minus values and share them with our readers every Friday.

Games that are played with rain in the forecast are listed in RED on the Lineups page for a reason. The threat of postponement or a delay is never good news for players, and that’s especially true for pitchers. Even if a game does resume after a lengthy delay, it’s likely that the starting pitchers’ outings will be cut short by several innings.

So rostering a starting pitcher in a game that may see rain is risky, obviously. But in tournaments, where we are constantly weighing risk against Upside, what happens to ownership levels for these pitchers? If a pitcher is in a good spot and his ownership level drops low enough due to the threat of rain, at some point, it makes sense to bite the bullet and take a chance.

With that said, in this week’s trend, I’m going to look for pitchers who are in good spots, but are playing in games where it may rain. We’ll look closely at ownership numbers and, obviously, production as well.

Plus/Minus, Pro Trends, Upside, and other premium exclusive metrics are accessible via our free Ratings tool.

The filters used to create this trend were:

– Chance of precipitation is greater than 40 percent

– Team is the favorite

– Pitcher’s K Prediction is at least 5.5

For an unparalleled DFS edge, try our free Trends tool, where you can access our massive database of advanced data and leverage our premium exclusive metrics, such as Bargain Rating, Upside, Consistency, and Plus/Minus.

As you can see, we lose over two points in Plus/Minus and a majority of the result set once we apply the rain filter. Undoubtedly, there are some pitchers in this cohort whose outings were cut short by lengthy rain delays. For others, maybe a higher humidity led to a more positive Weather Rating for opposing batters. In any case, we see that rain = bad.

But, the overall Plus/Minus even with the rain filter is still positive, meaning there may be situations we can capitalize on lower ownership levels.

The following screenshots are pulled from entries into FanDuel’s guaranteed prize pools throughout the week.

This is from the four-game afternoon slate on July 4th. Matt Harvey (vs. MIA) was Eickhoff’s main competition at pitcher tonight and although Harvey was the top-rated option in the Bales 2016 Model, he was rostered on only 27 percent of the teams in this GPP. DFS players were clearly more concerned with Harvey’s recent performance than with the threat of rain in the Braves-Phillies game (52 percent). Or people were just not paying attention because it was the 4th of July and they didn’t follow the weather as closely as they normally would have . . . who knows?

Whatever the case, the threat of rain did not come to fruition and, as a result, I was able to reap the benefits of Eickhoff’s nice matchup against Atlanta.

Though he did not make it to lock as a match for this trend, Leake did qualify at various points during the day, so I listed him here. Mike Leake is a guy that tends to pop up from time to time when I create pitcher trends because his home stadium has a high Park Factor and Vegas rarely predicts his opposition to score a ton of runs. He’s also a guy I almost never roster because he has very little upside due to a lack of strikeouts.

Anyway, this game was played in full despite an iffy forecast and Leake was actually cruising through the first four innings before the wheels fell off in the fifth. The most advantageous weather-related play on Tuesday turned out to be batters from the Twins-Athletics game. Although it looked like there was no way this game was going to play with much of the area under severe storm/tornado warning, the game did play. Players who stacked the Twins were rewarded with 11 runs at negligible ownership. 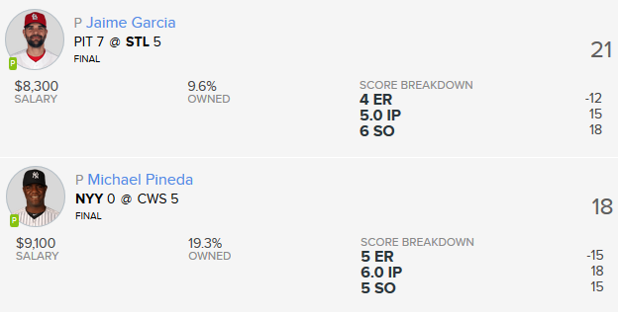 On a Main slate that desperately lacked elite pitching options, it’s hard to tell how heavily ownership levels were affected on Pineda and Garcia.

One thing I am considering as we get further and further into the week is: What is more important, the actual forecast or the weather icon that FanDuel displays on their website as you are creating teams? Especially at lower buy-in levels, how closely do we really think the average player is monitoring forecasts in the 10 to 15 MLB cities where games are taking place that day? Now that FanDuel displays a weather icon right on their site to give users a rough idea of the weather forecast in that game, I wouldn’t be surprised to learn that there are players who rely solely on that for forecast information.

Anyway, back to the results. The good news is that through three days of games, I have yet to roster a pitcher who was victimized by an in-game delay. The bad news is that it doesn’t seem like there has been much of an ownership discount so far, and also, the results have not been great.

Though the game was delayed over an hour, the Pirates-Cardinals game was played in full yesterday. And on another day with sketchy pitching options, Wainwright certainly should have been rostered on more than four percent of the field in the All Day slate. This was the first game to have its start delayed this week and with that came a nice ownership number.

I’m generally more aggressive with pitchers playing in games where the risk of rain occurs closer to first pitch. Obviously, a late start is much better for a pitcher’s fantasy prospects than an in-game delay.

In the one game to actually be delayed, I was able to roster a pitcher in Adam Wainwright who was in an otherwise decent spot at low ownership. In this case, my willingness to take on the additional weather risk did pay off for me in the tournament I had entered. Remember that outside of the negative precipitation filter, we have screened for pitchers who have positive matchups using the other three filters in this trend.

In games where there was a lower level of risk that did not ultimately lead to a delay or postponement, I did not detect any significant ownership advantage. Whether that is due to small sample size or DFS players becoming more savvy as the MLB season goes on is something that would need more investigation.