Both DraftKings and FanDuel offer an eight-game all-day slate starting at 12:10 p.m. ET, along with four-game (FanDuel) and five-game (DraftKings) early slates at the same time.

However, Strasburg still carries a decent 7.0 K Prediction, and he’s in excellent form over his past two starts, holding hitters to a 178-foot batted-ball distance, 87-mph exit velocity and weak 13% hard-hit rate. On a day without a lot of strong pitching options, Stras is one of the better choices, as the Nationals are -168 on the moneyline, and the Cardinals are implied for 3.8 runs.

Berrios is likely a bit overpriced when you consider that he’s facing an Astros team that ranks sixth in wRC+ against righties this year and has a low 19.2% strikeout rate and high .345 wOBA against them over the past 12 months. It’s difficult to feel confident in a pitcher with a high salary and K Prediction of just 5.3. He can safely be avoided in cash games.

Tyler Skaggs boasts a 93% Bargain Rating on FanDuel in his matchup against a projected Blue Jays lineup with a high 27.5% strikeout rate and middling.309 wOBA. He’s been decent this season, pitching to a 4.11 xFIP and 23.5% strikeout rate. Those numbers aren’t anything to write home about, but they’re both slightly above league for a starting pitcher.

Overall, he’s in a good spot considering there are just two games on the night slate. The Angels are -141 moneyline favorites, and the Jays are implied for a mediocre 3.9 runs. His price tag will make it easier to fit in some of the top-priced bats.

Michael Foltynewicz could be a viable SP2 option on DraftKings with his 81% Bargain Rating. His price has decreased by $800 after his first start of the season against the Rockies on April 27th. He has a decent matchup against a Padres lineup that has a 25.4% strikeout rate and .289 wOBA against righties over the past year. The Padres also rank just 25th in wRC+ against righties this season.

David Price: He carries an excellent 31.6% strikeout rate this season, along with a 3.19 xFIP. On deck is a projected White Sox lineup with a 27.2% strikeout rate and .300 wOBA. Consequently, Price’s 7.7 K Prediction leads the entire day.

Noah Syndergaard: He’s seemingly struggled all season, striking out more than seven hitters just twice and allowing four or more earned runs in all but one start. But with limited options, here we are. On the bright side, the Reds are implied for a slate-low 3.2 runs, and the Mets are -174 on the moneyline.

Jon Gray: He could be interesting for tournaments and as an SP2 on DraftKings. The projected Brewers lineup has a 26.6% strikeout rate and mediocre .296 wOBA against righties over the past 12 months. But the Rockies are still slight underdogs (+111 moneyline), and the Brewers are implied for 4.5 runs.

Charlie Morton: His 7.4 K Prediction is the third-highest mark on the day. The Royals’ 23.4% strikeout rate is on the lower end, but they’re implied for a paltry 3.6 runs while the Rays check in as -150 favorites. 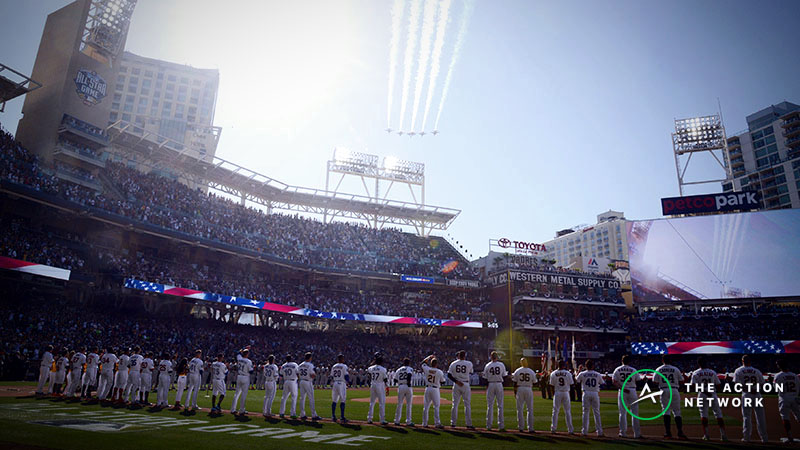 With our Lineup Builder, it’s easy to incorporate stacks into DFS lineups. The top four-man all-day DraftKings stack from the CSURAM88 Player Model belongs to the Washington Nationals.

The Nationals have a 4.8 implied run total, as they’re set to take on right-handed Dakota Hudson. He’s in poor form over his past two starts, allowing hitters to average a 223-foot batted-ball distance and 94-mph exit velocity.

Soto was scratched on Wednesday after dealing with back spasms, so be sure to monitor our news feed or Lineups Page when confirmed lineups come out.

It’s a good spot for Kendrick, who boasts an elite .404 wOBA and .211 isolated power (ISO) against righties over the past 12 months. He could also benefit from Hudson’s poor form: Kendrick is in excellent form with his 241-foot batted-ball distance, 93-mph exit velocity and 43% hard-hit rate over the past two weeks.

One of the top stacks in the CSURAM88 Model for FanDuel’s all-day slate belongs to the Boston Red Sox.

The Red Sox will likely be a popular team: They lead the all-day slate as well as FanDuel’s main slate with their 4.9 implied run total.

Benintendi will be on the positive side of his splits, hitting right-handed pitchers to the tune of a .367 wOBA and .185 ISO over the past year. Furthermore, he’s been smashing the baseball, averaging a 240-foot distance, 93-mph exit velocity and 48% hard-hit rate. Martinez is in a similar boat, sporting a .419 wOBA and .284 ISO to go along with his 94-mph exit velocity and 48% hard-hit rate.

Mike Trout is the most expensive hitter on Thursday, but he’s not hard to fit in with the lack of top-end pitching options. He could be worth every penny with his .486 wOBA and .331 ISO against righties over the past 12 months. Trout has now gotten on base for 28 straight games this year, so why not make it 29?

Tommy La Stella is one of the top third basemen in the Batted Ball Model for Thursday. He carries an 83% Bargain Rating on FanDuel, which could make the leadoff man a nice source of salary relief. He has excellent Statcast data over the past two weeks, evidenced by his 95-mph exit velocity and massive 60% hard-hit rate. All of those marks give him positive batted-ball differentials relative to his 12-month averages. Per our Trends tool, leadoff hitters with comparable batted-ball data have historically averaged a +1.53 FanDuel Plus/Minus.

Xander Boegarts didn’t pop up in the stack generator, but he’s also in play at a weak shortstop position. He possesses a .346 wOBA and .215 ISO against righties over the past year, and he’s also in good batted-ball form with his 226-foot average distance, 92-mph exit velocity and 48% hard-hit rate.