On both DraftKings and FanDuel, there are surprising only two pitchers who cost $10,000 or more:

Bauer checks in with the second-largest moneyline odds on the slate (-187), but the Rangers are implied for 4.0 runs, a higher mark than you would like to see when paying up for a stud pitcher. Thankfully, the Rangers struggle against right-handed pitchers, ranking 28th in weighted runs created plus (wRC+), and their projected lineup boasts a juicy 26.9% strikeout rate to righties. Bauer’s 9.7 K Prediction is on the high end as well, and he may garner less ownership than usual given the strength of the mid-range and value options at pitcher today.

The slate is headlined by Strasburg’s return to the rotation after he was sidelined in June with inflammation in his throwing shoulder. His 12-month 1.07 WHIP ranks second on the slate, and, unlike Bauer’s Vegas data, the opposing Braves are implied for a paltry 3.5 runs to pair with the Nats’ strong -172 moneyline odds. The matchup overall is middling — Atlanta ranks ninth in wRC+ with a 25.2% strikeout rate against right-handed pitching — and Strasburg’s 7.7 K Prediction falls outside the top five. That said, per our MLB Trends tool he’s posted 25.55 DraftKings points per game, a +5.99 average Plus/Minus, and an 83.3% Consistency Rating over the past five seasons with comparable Vegas data. Coming off an injury, he may be better suited as an option for guaranteed prize pools until we can have full confidence in his workload. 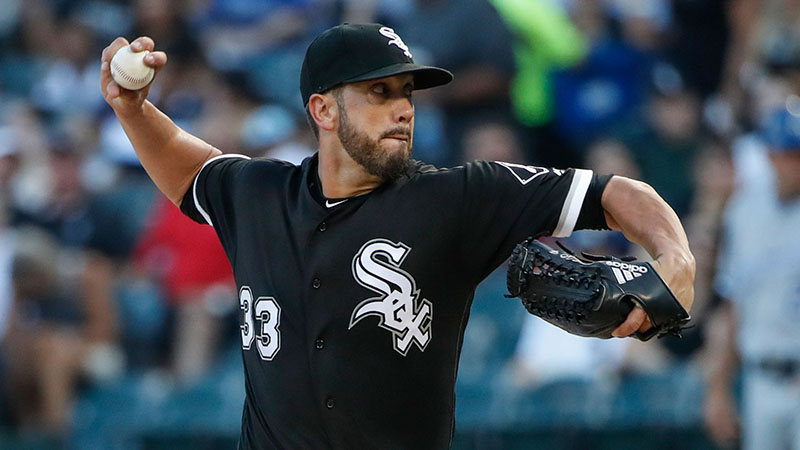 Clayton Richard is sporting a 97% Bargain Rating on DraftKings, and although the Padres are +149 underdogs, there is clearly upside here, as the projected Phillies lineup owns a slate-worst 29.2% strikeout rate to left-handed pitching. While offering salary relief, Richard also provides solid recent Statcast data, including a 182-foot batted-ball distance and 15% fly-ball rate despite giving up a 48% hard-hit rate over his past two starts.

If Richard’s Vegas data doesn’t make you warm and fuzzy, Wade LeBlanc may be a popular alternative. The Mariners are slate-leading -190 moneyline favorites in a great matchup against the White Sox, who also strike out at an above-average rate to lefties. That said, LeBlanc carries limited upside with a 5.1 K Prediction and has terrifying recent Statcast data. He’s allowed a batted-ball distance of 244 feet and 52% fly-ball rate over his past two starts.

Kyle Gibson: The mid-range is absolutely loaded with solid options today, but no one is as intriguing as Gibson. His 10.3 K Prediction leads the slate, and he has a top-four ceiling projection in our Models at just $8,600 on DraftKings. The Royals can’t hit right-handed pitching, sporting a bottom-three wRC+ and pathetic .299 wOBA. There are very few pitchers in our Trends database who have had similar K Predictions at his salary range.

Rich Hill: He has a great matchup today against the Brewers, whose projected lineup owns a 27.9% strikeout rate to lefties. His 1.17 WHIP and 10.77 SO/9 over the past year are both top-three marks on today’s slate, and his 9.7 K Prediction trails only Gibson’s. Similarly-priced pitchers with similarly-high K Predictions have provided a strong +6.50 FanDuel Plus/Minus and 71.9% Consistency Rating.

Robbie Ray: He almost always carries upside in GPPs given his slate-leading 13.89 SO/9 over the past 12 months, and the Diamondbacks are -142 moneyline favorites against the Rockies. The matchup is terrifying, as almost all the big bats for Colorado are on the right side of their batting splits; they have an absurd .340 wOBA. If that isn’t enough, Ray has given up a ton of hard contact lately, including bottom-two data points in both exit velocity and hard-hit rate. If Ray ends up chalky based on his middling salary and 8.3 K Prediction, the significant negative factors in play could make him a decent fade.

German Marquez: A reasonable leverage play off of Ray could come in the same game with Marquez. His strikeout upside is usually low with 8.89 SO/9 over the past year, but the matchup is fantastic given the Diamondbacks provide a top-two 28.0% strikeout rate to righties over that same time period. His Statcast data is arguably the slate’s best, sporting a 179-foot batted-ball distance allowed, 87 mph exit velocity, and 9% fly-ball rate over his past two starts. 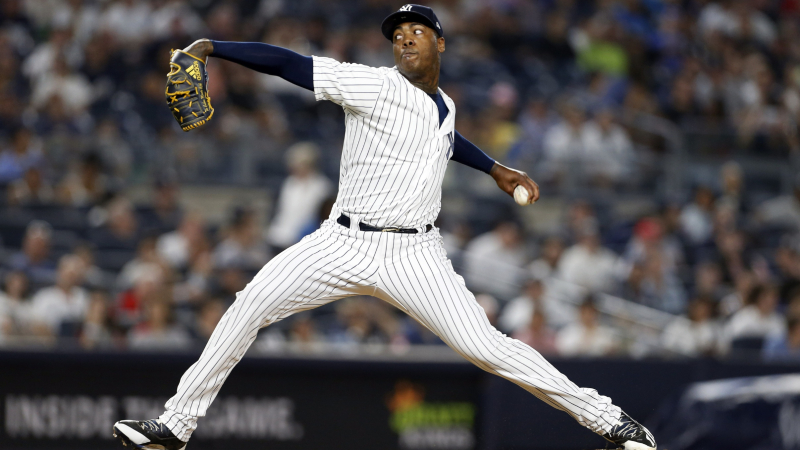 With our Lineup Builder, it’s easy to incorporate stacks into DFS lineups. One of the top DraftKings stacks in the CSURAM88 Model belongs to the Indians, who are implied for a slate-high 5.6 runs:

They’re expensive, but it may be worth it, as the Indians are set to take on Rangers lefty Martin Perez, who has a bottom-two 1.62 WHIP and troublesome 1.54 HR/9 allowed mark over the past 12 months. Projected to lead off, Francisco Lindor continues to smash, averaging 13.4 DraftKings points per game with a 54% Consistency Rating over the past month. Jose Ramirez leads the stack with a 48% hard-hit rate over the past 15 days, and he boasts a strong .411 wOBA and .274 ISO against left-handed pitching.

One of the top four-man FanDuel stacks in the Bales Model belongs to the Seattle Mariners, who are implied for 5.0 runs:

White Sox pitcher James Shields has been absolutely pummeled lately, allowing a batted-ball distance of 249 feet, exit velocity of 94 mph, and fly-ball rate of 48% over his past two starts.

The Mariners are ninth in wRC+ against right-handed pitching, and their projected lineup provides a strong .321 wOBA over the past 12 months. Mitch Haniger is one of the players on the right side of his batting splits, with a .364 wOBA and .226 ISO, so he could certainly lead the way for Seattle. Batting sixth, Denard Span could provide differentiation at a discount, with serviceable recent Statcast data and a 93% Bargain Rating.

The Red Sox’s 5.0 implied run total is tied for the second-highest today, and both Mookie Betts and Andrew Benintendi will likely be popular stacking options in the Nos. 1 and 2 spots, respectively, against Matt Boyd and the Tigers. Betts is on the right side of his dramatic batting splits, sporting an insane .487 wOBA and .339 ISO against left-handed pitching. Following him up will be Benintendi, who owns absurd Statcast data over the past 15 days, including a 243-foot average distance, 96 mph exit velocity, and 55% hard-hit rate, all of which are massively positive differentials compared to his 12-month averages. Be sure to keep an eye on the weather in this game as well, as there is currently a 58% chance of precipitation at game time.

San Francisco is well below the top tier of implied totals at just 4.4 runs, but Oakland’s Edwin Jackson has been susceptible to the long ball with a slate-leading 1.88 HR/9 over the past 12 months. The player most likely to take advantage may be Brandon Belt, as he’s doing his part to get the ball in the air with a 50% fly-ball rate over the past 15 days. He’s on the right side of massive batting splits, sporting a .408 wOBA and .249 ISO against righties over the past year.

Jorge Bonifacio is an intriguing leverage play away from Gibson, as the Royals’ No. 2 hitter has provided a 247-foot batted-ball distance, 96 mph exit velocity, and 50% hard-hit rate over the past 15 days. He has also been relatively unlucky with a +39 Recent Batted Ball Luck (BBL) score. Historically, batters with similar implied totals and lineup positions with comparably strong Statcast data have provided a +0.52 DraftKings Plus/Minus.

Aaron Judge could be chalky, even against Mets pitcher Noah Syndergaard, but nearly the entire Yankees lineup is interesting with a 4.9 implied total and massive .352 wOBA against right-handed pitching. Judge stands out as underpriced on DraftKings with a 70% Bargain Rating, and he has been absolutely dominating lately, with an impressive 243-foot batted-ball distance, 95 mph exit velocity, and 48% hard-hit rate over the past 15 days. With a ton of viable mid-range options at pitcher, it could make sense to pay up for a batter like Judge; he’s posted an elite .413 wOBA and .325 ISO against right-handed pitchers over the past year.