And just like that, I’m a 12-year-old boy at summer camp, ballin’ hard on the blacktop as ‘yatches sing along to TLC. I was so gangsta in the summer of ’95.

Earlier today, Bryan Mears published a piece on the Vegas data of multi-touchdown performances. Give it a read:

Anyway, in that article Bryan looked at the top-350 fantasy players last year, considered the scrimmage yardage that they accumulated per touchdown, and then broke that down by position: 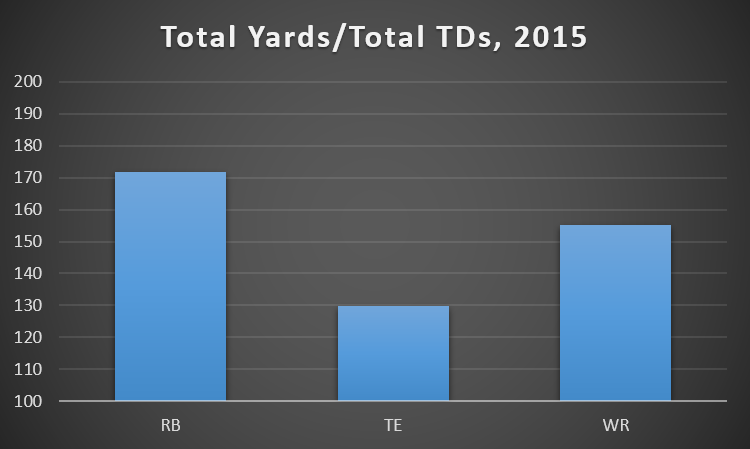 What are Some Normal Numbers?

Per the chart, we can see that on average wide receivers accumulate 155 yards per touchdown. What about in general? Across the league, what is a normal yardage/touchdown ratio for the passing game? Of course, Pro Football Reference has the data.

I’m sure that you’ve noticed that Yd/TD rate has steadily declined over the last decade. What’s going on? Are there now fewer passing yards? NO! More teams are throwing the ball than ever before, so yardage numbers have gone up, but where they’re really throwing the ball more is within the 10-yard line. Last year, 10 passers attempted at least 35 passes within the 10-yard line. In 2006? Two.

Gone are the days when (most) teams would be conservative near the goal line and run the ball (what felt like) every play. Last year, NFL offensive coordinators — men who are incentivized to call plays in a manner that will insulate them from criticism — decided that it was a good idea for Blake Bortles, Kirk Cousins, Ryan Tannehill, Jay Cutler, and Jameis Winston to throw a lot at the goal line. That’s amazing.

It should also make us ask this question: Who’s getting all of these targets inside the 10? In general, I’m going to say big-bodied receivers and/or guys who have a high catch rate.

What’s a high catch rate? Last year, while 63.0 percent of all NFL attempts were completed, Doug Baldwin led all qualified wideouts with a 75.7 percent catch rate. But, really, that’s a question for another article . . .

Back to the Theme of ‘Reversion’

When can we look at a player with a high Yd/TD rate and say, “That guy is due for some touchdowns”? When the guy looks like Julio Jones.

Last year, Julio was targeted a league-high 203 times. He led the league with both 136 receptions and 1,871 yards receiving. He caught 67.0 percent of his targets, so he’s above average at actually catching the ball. He gets consistent targets.

Given who Julio is, there’s no reason to expect that his Yd/TD rate won’t improve. Even if it simply reverts to his career mean of 182.4 Yd/TD, that could mean double-digit touchdowns for him for only the second time in his career. And if he reverts back to his early-career average of 136.9 Yd/TD, then he could possibly lead the NFL in touchdowns.

Julio is the reasonable candidate for touchdown reversion in 2016.

I like small and fast wide receivers. I think that they tend to be undervalued relative to their productive potential. I love T.Y. Hilton especially. But here’s the thing about a guy like Hilton: He’s a river. He’s not a waterfall.

Or maybe vice versa. Either way. I kind of don’t care.

He’s a perennial 1,000-yard receiver with a great quarterback. It’s easy to look at his yardage and his quarterback and think that Hilton will likely have more in 2016 than the five touchdowns he had in 2015. And you know what? It’s possible. He might have six. Maybe seven.

As a rookie, Hilton had Bruce Arians as his offensive coordinator. Arians is the type of play caller who specifically designs touchdown-seeking plays for smaller receivers like Hilton. In his first NFL season, Hilton had a strong 123.0 Yd/TD rate. Over the last two years, his doppelgänger John Brown has an above-average 141.6 Yd/TD. Arians gave Hilton some first-year juice.

Last year, Hilton had six targets inside the 10-yard line. For his four-year career, he has 23 such targets, which he has converted into receptions at a 47.8 percent rate. Not once has he been targeted even 140 times. Not once has his catch rate hit the 2015 league average of 63.0 percent. His career catch rate is a mediocre 57.2 percent.

Don’t go chasing Hilton’s receiving yards hoping that he’ll revert to the league average and score 10 touchdowns. You can expect some big games out of Hilton, but you can’t expect any touchdown consistency. 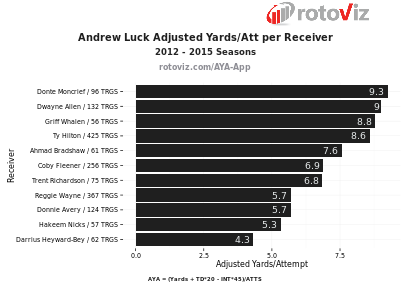 If Moncrief and Allen establish themselves this season as Luck’s primary red-zone weapons and touchdown savants, it won’t matter how many targets and yards Hilton gets: He’ll be hard to play as anything other than one component of a Colts stack in guaranteed prize pools.

I’ve focused on Julio and Hilton, in part because those two really might be my favorite receivers, but this piece really is about process and analysis.

During the season, you’re going to hear a lot about reversion, touchdown rates, market share, and a lot of things that can be tested via our Trends tool.

Just remember that for some types of players some stats, averages, and baselines matter more than others.

Don’t confuse a T-Boz for a Left Eye.

This is the 87th installment of The Labyrinthian, a series dedicated to exploring random fields of knowledge in order to give you unordinary theoretical, philosophical, strategic, and/or often rambling guidance on daily fantasy sports. Consult the introductory piece to the series for further explanation.

Matthew Freedman is the Editor-in-Chief of FantasyLabs.