This article is one in a series that uses the FantasyLabs Tools to build daily fantasy scouting reports for each of the NHL’s brightest stars.

Drafted fourth overall by Nashville in 2013, Seth Jones has blossomed after receiving a fresh start in Columbus midway through last season. In this scouting report, we will examine this young talent and attempt to explain his recent struggles in relation to his breakout season totals.

Here are Jones’ per-game averages since he entered the league:

From a fantasy perspective, Jones has taken a big step as an offensive contributor this season. It’s no surprise that, given his solid history of accumulating peripheral stats, his increase in goals and assists this season has correlated with a spike in Plus/Minus (per our Trends tool):

Keep in mind, Jones was traded from the Nashville Predators to the Columbus Blue Jackets midway through the 2015-16 season. Here are those splits:

For context, this is how the rest of the league’s Power Play (PP) defensemen have done over the past two seasons:

From a value and Consistency perspective, Jones has been a strong play on DK relative to his salary since his trade to Columbus. For the remainder of this study, we will focus on the most relevant sample — his time with the Blue Jackets.

Jones has been a consistent producer most of this season, yet over the past month he has struggled to hit value. Let’s see if we can uncover some answers via the Trends tool.

In terms of splits, defensemen typically provide more value and Consistency at home.

Jones has typically been above average at home and below average on the road since his trade to Columbus:

However, in 2016-17, Jones has actually performed slightly better on the road at reduced ownership. (By the way, be sure to check out our DFS Ownership Dashboard for NHL.)

Rostering Jones in road games could be a nice leverage play in tournaments with most people gravitating towards skaters at home.

Of Jones’ most frequent opponents, the Devils and Hurricanes have given him the most trouble:

The counts are relatively low, but the data could still be noteworthy given the uncharacteristic lack of Consistency. Of Jones’ most frequent opponents, he has the strongest Plus/Minus against the Red Wings and Rangers but has also consistently hit value against the Bruins.

Of teams Jones has faced at least three times, he has typically smashed against the Panthers and Capitals at low ownership:

The sample regarding the Capitals (who boast one of the league’s top goal scorers in Alex Ovechkin) is especially interesting, as they could easily be a team Columbus would see in the playoffs. When looking at his worst average Plus/Minus values with at least a three-game sample, the Devils and Lightning stand out:

New Jersey is in Jones’ same division, yet they currently sit in last place and own the largest losing streak in the NHL at the time of this writing (nine games). Interestingly, if you’ve rostered Jones in that ‘cupcake matchup’ this season, it’s stung a bit.

Overall, Jones has been considerably more consistent in non-division games:

Here is how he’s performed against each division as well:

Jones has crushed the Central division since his trade to Columbus, yet he is typically lowest-owned in those games.

There isn’t a huge edge on DK in targeting defensemen as favorites versus underdogs:

However, Jones has fared much better as a favorite for Columbus:

His ownership is also higher, so maybe he would be a stronger cash-game play in these situations.

It’s ideal to target recent shooting spikes and leverage blocked shots. Jones has seen a significant dip in his shots on goal percentile rank over the past month. (He’s also experienced a slight decline in blocked shots.)

Finding value with peripheral stats is huge, so it makes sense that we see a steep decline in Plus/Minus over the past 10 games:

Using our Lines Page, Jones has been arguably the worst play among the Blue Jackets’ top-four players over the past month in regards to peripheral stats.

He has provided tons of value this season at $5,000 DK and under, but he’s actually been priced above that salary in each game since Feb. 1st:

Also, notice that his ownership is 7.8 percent on average. Over the last 15 games, there’s been a huge edge in fading Jones.

Like on DK, Jones has provided a ton of value on FD as a whole this season. His Consistency has also been far better when priced at $5,000 and above.

His recent struggles have hurt his value on FD, especially at $5,000 and above:

Here’s the average production for Columbus players during Jones’ 20 best fantasy performances since the trade: 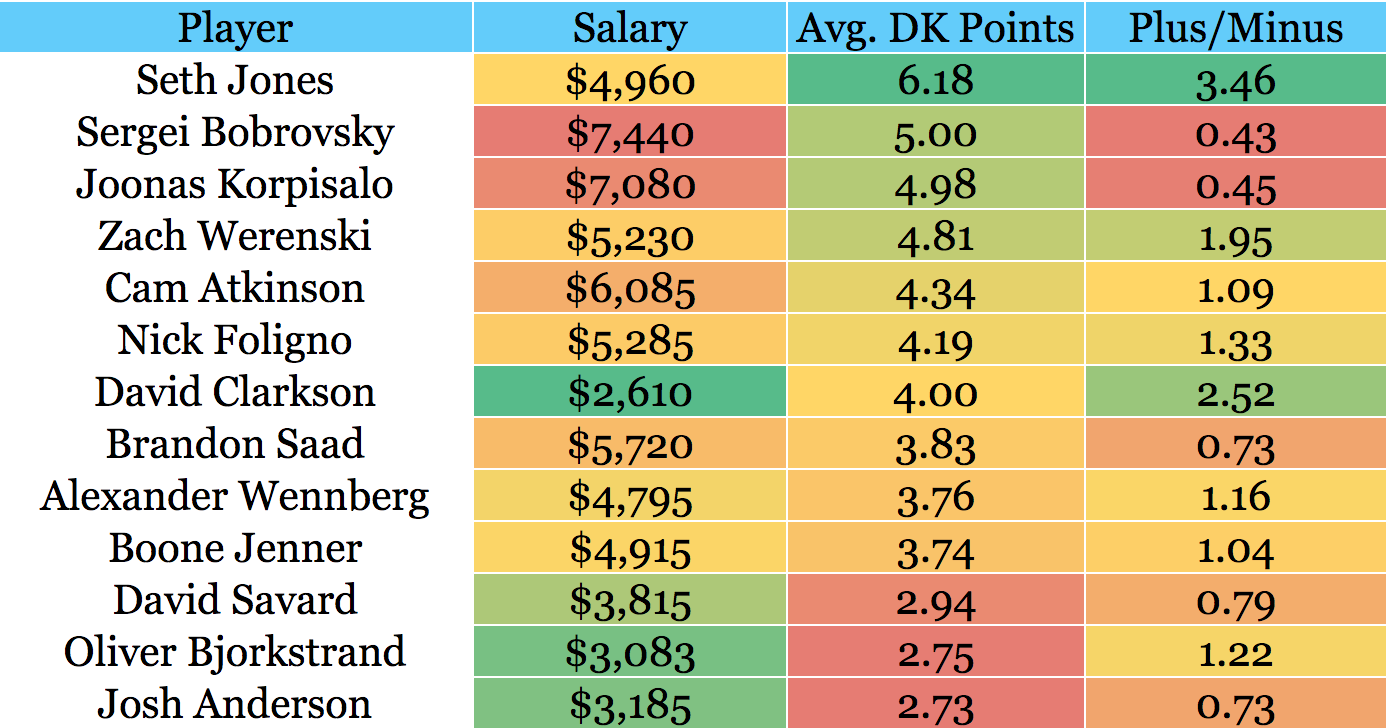 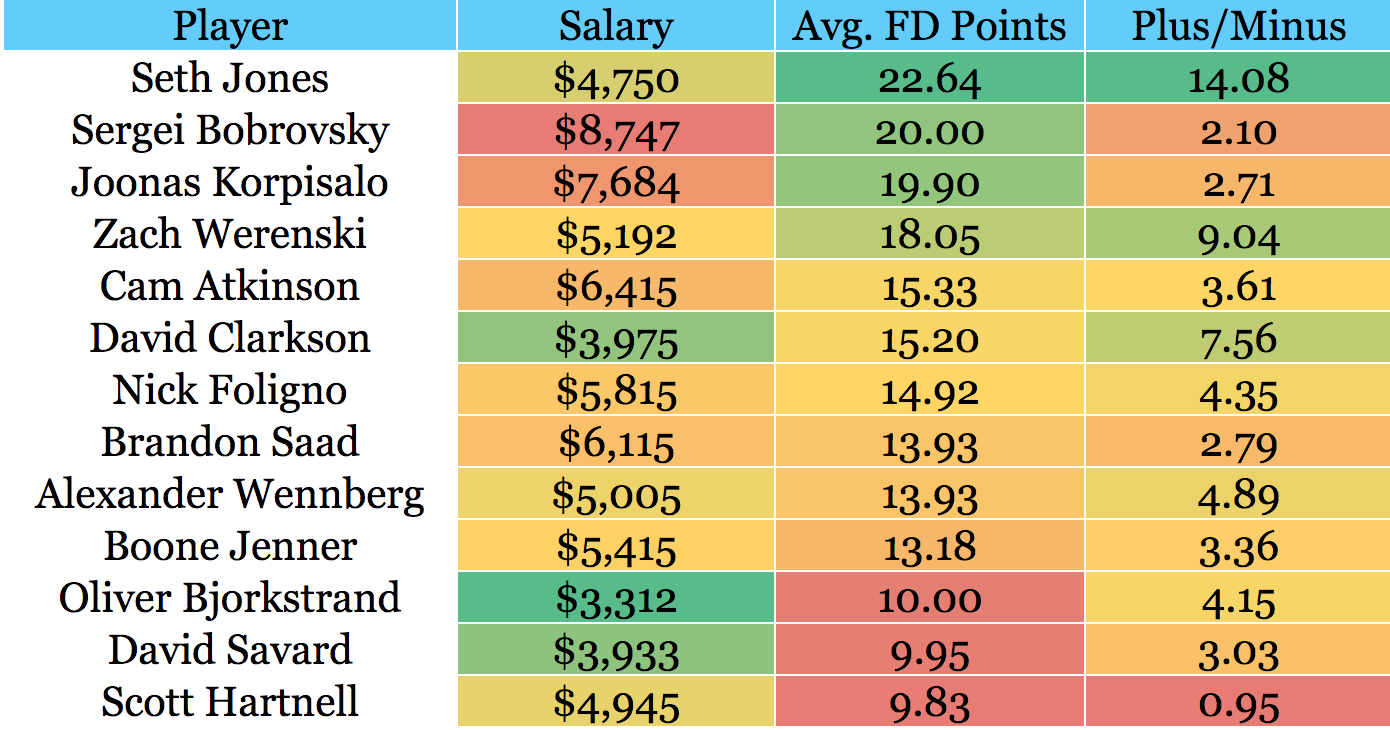 There has been value in stacking Jones with his defensive partner Zach Werenski or even top-end forwards like Cam Atkinson or Brandon Saad.

Jones’ correlations tab (in our Player Models) more or less reflects the data we see above, but the top punt option on both sites has likely been Oliver Bjorkstrand.

Jones has been very consistent over his NHL career in regards to peripheral stats. The spike in his fantasy production has come since his trade to Columbus, but he has also significantly increased his goals and assists in 2016-17.

Home/Away splits have not affected him as much relative to position averages, so there may be value in rostering him on the road at lower ownership.

Interestingly enough, Jones has struggled against the Devils (one of the worst teams in the league) and done very well against Washington (one of the best). He has typically been far more consistent in non-division games and has provided considerably more value as a favorite.

His significant decrease in peripheral stats in comparison to other defensemen on his team has negatively affected his value over the past month. If his recent struggles continue, the edge may be in fading Jones completely at his current price and ownership on both sites.