David Johnson: Can He Thrive Without Arians, Palmer?

With the NFL Draft and free agency having come and gone, we’ll break down all sorts of fantasy-relevant questions entering the 2018 season. Up next is a look at whether the Arizona Cardinals’ electric featured back will pick up where he left off in 2016.

2017 was the end of an era for the Cardinals. Head coach Bruce Arians and quarterback Carson Palmer both retired after the season, closing the book on one of the most productive five-year stretches in franchise history.

But the good news is franchise great Larry Fitzgerald is back for another go around. And in even better news: Arizona will also welcome back one of the most complete backs in the league.

Recency bias is a helluva drug. It can be tough to recall just how dominant David Johnson was in 2016. He became the first back in 10 years to eclipse 400 PPR points in a single season.

There have only been 10 instances EVER of a RB racking up 400+ PPR in a single season:

Johnson is a SPARQ-plug with elite athleticism and size for the position, but even the largest, most athletic players aren’t always valuable fantasy commodities because you need volume to be productive. This hasn’t been the case with Johnson, who handled 23.3 touches per game in 2016. His ability to parlay his immense workload with top-tier efficiency separated him from basically everyone except Le’Veon Bell that year:

Players that stand 6-foot-1 with a 225-pound frame shouldn’t be capable of moving as fluidly as Johnson. His unique combination of tackle-breaking ability and breakaway speed make him a nightmare for any and every defense to deal with. Per our NFL Trends tool, he ranks in the top four in DraftKings and FanDuel points per game and Plus/Minus since entering the league in 2015.

The departure of arguably the best coach and quarterback in franchise history is certainly bad news for Johnson; featured backs have historically been more consistent and more valuable when paired with elite signal callers. Still, new offensive coordinator Mike McCoy isn’t a stranger to creating fantasy-friendly workloads for his lead back. McCoy, at one time the Broncos offensive coordinator, utilized Knowshon Moreno as a receiver out of the backfield a lot during the early part of his tenure, but any semblance of a modern pass offense went out the window once Tim Tebow became the quarterback. McCoy regained his status as one of the league’s most receiving-friendly enablers for backs with the Chargers, feeding Danny Woodhead over 75 receptions on two occasions. Of course, McCoy hasn’t gone out of his way to feature a running back at the expense of his offense. Most of his time with the Broncos consisted of committee backfields, while Woodhead’s heavy involvement in the Chargers offense was complemented by incumbent starter Ryan Matthews, and later, Melvin Gordon.

But McCoy has never had a running back with Johnson’s elite dual-threat ability. Johnson is more than capable of lining up anywhere in the formation and making an impact as a receiver. 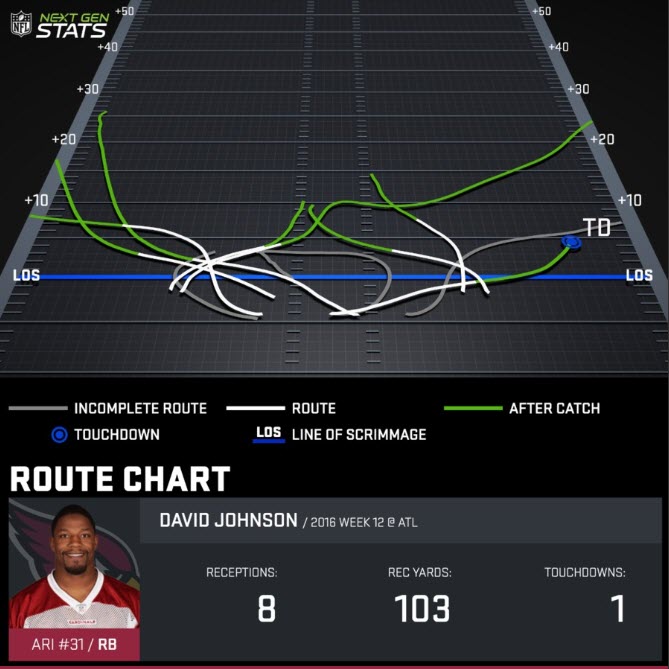 Johnson’s ability to take over a game as both a runner and receiver helps limit the impact of negative game scripts, which he could see a lot of as a member of what’s shaping up to be a below-average offense.

Newfound expectations under Arians helped produce preseason Vegas win totals of at least 7.5 for the Cardinals in each of the past four seasons, but BetOnline currently has them at 5.5 (-150 lean on the over). Johnson has certainly been a better fantasy asset during Cardinals wins, when game flow tends to call for copious amounts of rushing attempts, but an uptick in receiving usage has still made him formidable in losses:

Interestingly enough, reality hasn’t exactly meshed with the closing spread for Arizona, as Johnson has averaged an additional six DraftKings points per game in his career as an underdog. Targeting running backs with pristine game flow and a solid matchup should generally lead to enhanced production, but Johnson’s unique workload and dual-threat ability has resulted in a high floor and through-the-roof ceiling.

As of this writing, Johnson is the No. 3 running back taken in standard leagues and the No. 4 running back taken in PPR leagues. Todd Gurley‘s continuity sets him up well for an encore performance, but Bell will likely sit out all of camp, and Ezekiel Elliott faces life in an offense with a bevy of question marks in the passing game. Meanwhile. it’s tough to find a more complete back in the league than Johnson, which means he should theoretically be more scheme- and coach-agnostic than your typical running back. Johnson remains one of the league’s only backs with No. 1 overall fantasy upside in his potential range of outcomes, and even a poor showing from his new teammates (including PFF’s No. 27-ranked offensive line) might not be enough to hinder his weekly production.