Buffalo-Seattle has the highest projected over/under on the Week 9 slate at 55 points. Both teams have a projected team total of 26 points or higher. The first pairing to stack is Josh Allen with wide receiver Stefon Diggs.

Even last week in their 37-27 win against San Francisco, backup quarterback Nick Mullens totaled 238 yards and two touchdowns. Allen’s unique rushing ability should also thrive against a Seattle defense that has allowed the fifth-most quarterback rushing yards and a league-high four rushing touchdowns.

Diggs has been one of the most consistent fantasy receivers in the league. He enters Week 9 ranked first in targets (79), second in receptions (54), and second in receiving yards (695) among all wideouts. Diggs has one of the highest weekly floors as illustrated by the RotoViz Weekly Stat Explorer. 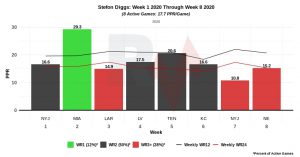 His projected CB matchup is with Seattle’s Quinton Dunbar. He replaces top CB Shaquill Griffin, who is still not practicing (concussion protocol, hamstring). Per PlayerProfiler, Dunbar ranks just 75th among all cornerbacks in coverage rating.

The bring back play for the Seahawks is wide receiver Tyler Lockett, who has produced two overall WR1 performances this season.

We certainly want exposure to the highest-projected total on the Sunday slate, and the running backs for both Buffalo (timeshare) and Seattle (injuries) are low EV plays. With Lockett’s value dipping below $7000 on DraftKings, this is the best way to stack Buffalo-Seattle.

Watson is only the fourth-most expensive quarterback for a Texans team with the third-highest point total on Sunday’s slate. Since former head coach Bill O’Brien was fired, Watson’s per game stat lines are as follows:

Facing a Jacksonville team that has allowed the third-most schedule-adjusted fantasy points to opposing signal callers, Watson is an attractive building block to pair with wide receiver Will Fuller, who has scored a touchdown in five straight games. Outside of his Week 2 game where he was hampered by a hamstring injury, Fuller has balanced consistency with blowout week performances: 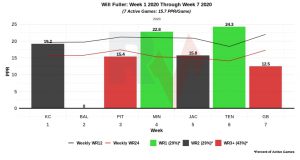 The best Jacksonville player to include is James Robinson, who leads all running backs with an 83.7% opportunity share. Despite coming off his bye week, Robinson ranks 11th in rushing yards, fifth in running back receptions, and third in receiving yards. He has two major factors working in his favor in Week 9.

Second, the Houston defensive line is now severely shorthanded due to COVID. Per Brandon Thorn (ETR), the Jacksonville OL vs. Houston DL is the top mismatch in Week 9. Both linebackers Whitney Mercilus and Jacob Martin will miss this game, weakening an already putrid Texans pass rush.

The Jaguars offensive line will be fully healthy on the bye, and Houston allows the second-most schedule-adjusted PPR fantasy points to opposing running backs.

The affordable prices on this stack allowed us to structure the FantasyLabs optimizer to include Lockett and a unique two TE build with Denver’s Noah Fant and Los Angeles’ Hunter Henry. 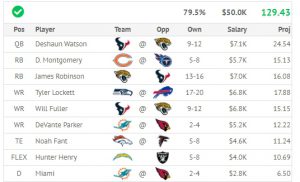 With Jacksonville starting Luton, projected ownership on this stack should be subdued. This QB + WR + opposing WR stack is a fiscally efficient way to get exposure to a game with sneaky high-scoring upside.

As a result of the weekly tight end anxiety at fantasy most volatile position, I’m labeling Travis Kelce as Week 9 “good chalk.” He the top overall tight end in fantasy football by a landslide.

Kelce ranks first at the position in the following categories:

The Panthers are among the NFL’s worst defenses, ranking 25th overall in defensive DVOA per FootballOutsiders. In order to keep this game competitive, the Panthers are going to need to score points. This makes Teddy Bridgewater an attractive upside option as one of the cheapest (12th on DK, 14th on FD) quarterback plays.

Despite having a career-best season, Robby Anderson comes at a reduced price due to the recent production of fellow wideout D.J. Moore. Anderson still ranks third overall in receiving yards, and ranks fourth in Josh Hermsmeyer’s Buy-Low Air Yards Model. His subpar five-reception, 45 receiving yards performance in the poor conditions last week should suppress ownership in a pass-heavy game script.

The low price on the Bridgewater-Anderson stack allowed for both James Robinson and the high-priced Julio Jones at home using our FantasyLabs Optimizer: 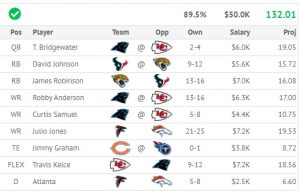 This is your cheap QB stack for Week 9. Anderson has slate-winning talent and is balanced by the consistency and top TE production of Kelce.

While this feels like chasing points, Dalvin Cook is in another smash spot at home against Detroit.

With quarterback Matthew Stafford currently on the COVID list, there is a chance the Minnesota defense could be facing David Blough or Chase Daniel. Even if the Vikings face Stafford, they will do so without leading WR Kenny Golladay, who suffered a hip injury in Week 8.

Despite Cook’s high price, the saving on the Vikings defense still allows room for representation from all the above stacks. 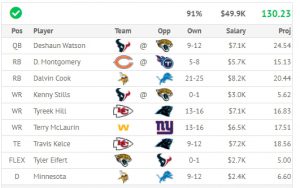 There are times when the obvious play is still the right play. Similar to Green Bay’s Davante Adams and Kansas City’s Travis Kelce, Cook is worth the high price tag and ownership in Week 9. Look for Mike Zimmer’s improving defense to force a few turnovers at home against the Lions, making this RB + DEF/ST stack a strong DFS building block.