As we saw in last week’s Tennessee-Houston battle, stacking a QB + WR with the opposing running back can be a DFS winning combination.

The Packers are coming off their first loss of the season, a 38-10 blowout at Tampa Bay. The Buccaneers defense pressured Aaron Rodgers into two interceptions with four sacks. As with most quarterbacks, Rodgers historically struggles when under pressure.

He should have no such problem against the 1-5 Texans.

Houston’s defensive line ranks dead-last in adjusted sack rate per Football Outsiders. They are tied with Miami for fewest sacks in the league (five).

Per the FantasyLabs trends tool, Rodgers has a history of posting big fantasy production against bad teams. 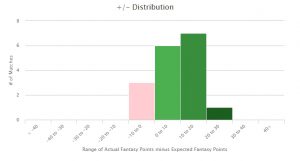 While the logical pairing is with wide receiver Davante Adams, I expect his production to be somewhat tempered by Texans cornerback Bradley Roby who has been strong against opposing WR1s. By pivoting off Adams, we open roster construction flexibility.

Similar to Derrick Henry last week, I will bring back a running back in Houston’s David Johnson. Green Bay’s defense has allowed a robust 4.8 yards per carry and nine total touchdowns to opposing running backs.  The Packers defensive line has been among the league’s worst in defending third and fourth down short runs. Per Football Outsiders, teams have found success 83% of the time in those situations, ranking 31st among all defenses.

Johnson has not been efficient, but he is certainly getting opportunities. He ranks third among all running backs in snap share (83.3%) and second in routes run (25.8 per game).

Using the FantasyLabs Optimizer, the choice of Valdez-Scantling allows for exposure to key players such as Alvin Kamara against the Panthers, Kenny Golladay at Atlanta, as well as Calvin Ridley against Detroit. 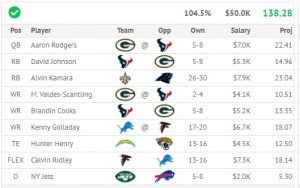 Alvin Kamara has the best fantasy matchup of any running back in Week 7. He leads all running backs in targets (45), receptions (38), and receiving yards (395), and is facing a Carolina defense that has allowed the most targets and receptions to opposing running backs this season. The Panthers are also tied with the most running back rushing touchdowns allowed (eight). Despite his high price tag, Kamara is in a smash spot, especially on DraftKings with the full PPR scoring.

Teddy Bridgewater returns to New Orleans to face his old team, but with a plethora of receiving weapons. Carolina’s top receiver this season has been speedster Robby Anderson.  The former Jets wideout ranks fourth among all receivers in receptions (40), second in receiving yards (567), and fourth in yards after catch (219). Prior to Week 6, Anderson had produced overall WR18 or better performances in four of his five matchups. Even last week’s four receptions, 77 receiving yards against a stiff Bears defense was reasonable.

The Saints are a pass funnel defense, ranking fourth-best in run defense DVOA but just 15th-best against the pass. New Orleans has also allowed the fourth-most fantasy points to opposing quarterbacks, including 15 total touchdowns with just three interceptions.

I used our FantasyLabs optimizer and increased the Bridgewater-Anderson stack by 15%, as well as made Kamara the priority bring back. This provided me a fantastic FanDuel lineup with quality game representation variance. 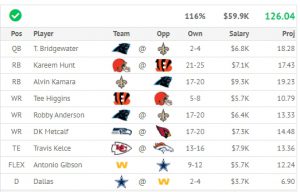 Playing indoors in New Orleans, Anderson’s speed is even more of a weapon against an underperforming Saints secondary. Add in Kamara’s massive volume, and this stack has one of the highest possible floors for Week 7.

The other game of interest this week is the Detroit-Atlanta matchup. It is difficult to project anything but a high-scoring shootout in this matchup at Mercedes-Benz Stadium.

We definitely want a piece of any Falcons home game, especially when Julio Jones is healthy. That usually equates to elite fantasy production for Atlanta quarterback Matt Ryan.

In the past 34 games with Julio Jones active, Ryan has basically produced as a Top 3 fantasy quarterback. 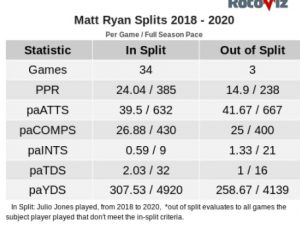 It is always difficult to pass on stacking Julio Jones, but when Atlanta is at home, there is no better wide receiver play than Calvin Ridley 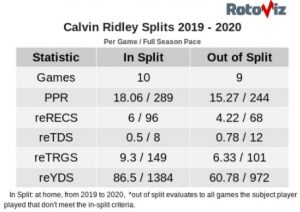 Ridley ranks first in wide receiver air yards and fourth in receiving yards despite getting shut out in Atlanta’s loss at Green Bay. He is one of the most dangerous receivers near the goal line, ranking first at the position in red zone targets.

The third part of this stack is Detroit wide receiver Kenny Golladay. The Falcons have allowed the most fantasy points in the league to opposing quarterbacks. Atlanta is one of the most-friendly defenses for opposing fantasy wideouts.

The Falcons has allowed the third-most receptions, second-most receiving yards, and second-most fantasy points to opposing wide receivers. That bodes well for Golladay, who historically has performed well in games with a high overall number total.

Per our FantasyLabs Trends Tool, since the 2017 season, in games with an over/under of 48 points or higher, Golladay has averaged 7.1 DraftKings fantasy points above expected value. Golladay has met or exceeded expectations 84.6% of the time.

This is one of the safest Week 7 stacks possible. With a high floor/high ceiling combination in one of the weeks’ highest-projected totals, the Ryan-Ridley-Golladay stack is appealing for both tournament and cash lineups.

I always like having an RB + D/ST correlated stack, and Cleveland provides that best opportunity.

The Browns are likely to skew even more run-heavy than normal, with quarterback Baker Mayfield dealing with a rib injury. Cleveland ran over the Bengals in Week 2, posting 215 rushing yards at 6.1 yards per attempt. While still sharing snaps with teammate Nick Chubb, Hunt managed 8.6 yards per attempt with both a rushing and receiving touchdown.

Hunt should gash a Bengals run defense that has allowed 716 rushing yards, third-most of any NFL team this season.

Most DFS players may be scared away from using Cleveland’s defense on the road in a game with a 50.5 over/under. However, the Bengals have allowed the fourth-most fantasy points to opposing defenses as a direct result of one of the league’s worst offensive lines. They have allowed the fourth-highest sack rate per FootballOutsiders besides functioning as the 29th-worst run blocking unit.

Using the optimizer, I can include a part of all my favorite stacks on DraftKings with Hunt + DEF/ST because of the cost-savings. 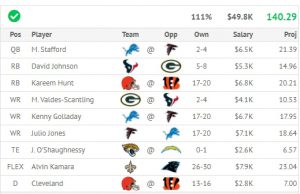 Hunt and the Cleveland Defense will be highly owned, but should produce as Sunday’s “good chalk” stack. You can use this stack and still get exposure to Kamara, Atlanta/Detroit, David Johnson, and the home run play with Valdes-Scantling.

Picking the right running backs this week is crucial, and Hunt should give a high-floor performance against the intrastate rivals.