Here’s where they place within our Week 15 fantasy football rankings (as of Tuesday evening).

Of these four, the two who stand out most to me are Murray and Tannehill. The other guys I will highlight as needed in the section on players with week-winning upside.

For the first 10 weeks of the season, Murray was maybe the best player in the NFL. He was certainly the best fantasy producer, ranking No. 1 among all quarterbacks with 32.4 fantasy points and +9.7 fantasy points over expectation per game (per RotoViz NFL Player Statistical Summary).

During this span, Murray’s consistency was unrivaled: In every game he finished as a fantasy QB1 (per RotoViz NFL Stat Explorer). 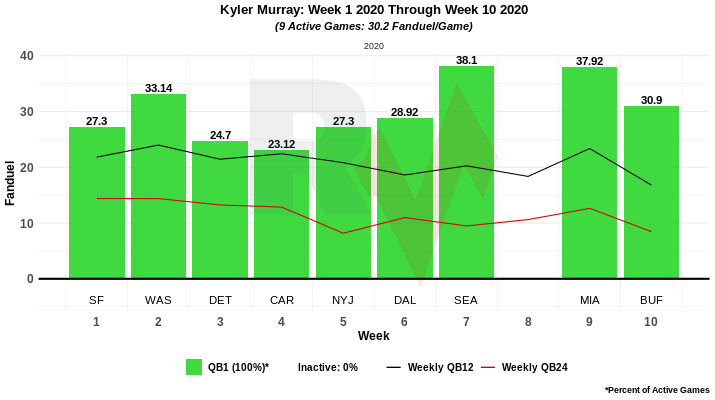 His consistency in large part derived from his Konami Code running ability: In his first nine games, Murray was an obscene 87-604-10 rushing.

But in the first quarter of Week 11 he suffered a shoulder injury, the impact of which has been apparent in his performance over the past month (per RotoViz Game Splits App). 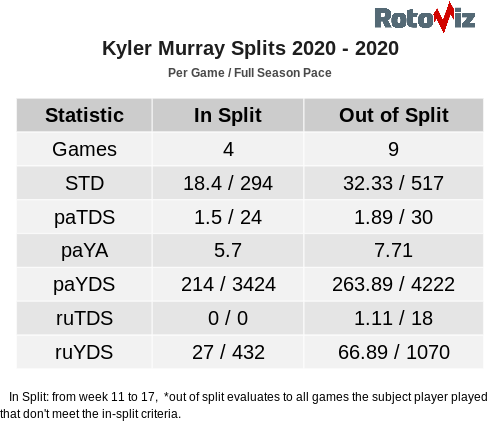 It’s not a coincidence that Murray’s four worst performances this year have all come over the past four games.

But last week I think we saw Murray return to form. As a passer, he had his best game of the past month with 7.54 adjusted yards per attempt (AY/A) — a mark nearly identical to his Weeks 1-10 AY/A of 7.57 — and as a runner he had his second-highest carry total of the season with 13.

In the words of Michael Scott: “It’s Britney, bitch, and I am back.”

Murray doesn’t have an elite matchup, but it’s also not prohibitive. The Eagles are No. 26 with a 43.8 coverage grade (per Pro Football Focus), and the two quarterbacks with eight-plus carries against them this year have done well.

As long as Murray truly is back to his former self, he should be able to produce against the Eagles.

In full disclosure: I’m betting against the Cardinals this weekend. I just can’t help myself. As dynamic as the Cardinals are, they have woefully underperformed with head coach Kliff Kingsbury as home favorites.

Road underdogs are 4-1 against the spread (ATS) against Kingsbury’s Cardinals, good for a 53.1% return on investment (ROI, per our Bet Labs database). You can bet on this game at FanDuel.

But my betting interest should not be interpreted as a lack of enthusiasm for Murray, who actually happens to be on the positive side of his splits (per our FantasyLabs Trends Tool).

The sample is small, but in his five games as a home favorite Murray has dominated with 29.3 FanDuel points per game and a 100% Consistency Rating.

Murray is a top-six QB1 in season-long leagues and the No. 1 quarterback in the Bales, Koerner, Raybon, SportsGeek and Hodge Models for FanDuel, where he has a position-high three Pro Trends.

Ryan Tannehill: Tennessee Titans vs. Detroit Lions (Off the Board)

This game is off the board at most sportsbooks because Lions quarterback Matthew Stafford (ribs) is uncertain to play.

#Lions QB Matthew Stafford’s status is in doubt for Sunday against the #Titans, but he hasn’t been ruled out yet, per me and @TomPelissero. Stafford is tough and has played through a lot, but he was in a ton of pain last night after his rib injury. Chase Daniel would step in.

With these lines, the Titans have a slate-high 31-point implied Vegas total: They should put up points.

Although Tannehill doesn’t play in a fast-paced pass-heavy offense, he has a big factor in his favor this week: His matchup. The Lions are bad, ranking No. 30 with a 25.8% pass-defense DVOA (per Football Outsiders), and even that feels generous — but, you know, I suppose the Jaguars and Jets are worse.

What really makes the matchup pop is the health status of the Detroit cornerback unit: The Lions are significantly injured at the position. No. 1 cornerback Desmond Trufant (hamstring, IR) and No. 3 overall pick Jeffrey Okudah (shoulder, IR) are both out, which means the Lions are highly vulnerable in the secondary.

In the absence of Trufant and Okudah, wide receivers A.J. Brown and Corey Davis have great matchups against cornerbacks Darryl Roberts and Amani Oruwariye.

Roberts is a subpar slot defender who has allowed a 71.1% catch rate this year and been forced to play on the perimeter because of injuries. He started for the Jets last year, which just about says everything.

Oruwariye is a second-year fifth-rounder who has allowed 9.5 yards per target for his career. Just last week, he yielded 5-106-1 receiving on six targets.

Against these corners, Brown and Davis on their own could gift 250 yards and two touchdowns to Tannehill.

Since last year, Tannehill is No. 1 among all starting quarterbacks with an elite 9.19 AY/A. Here are the top six (including postseason).

The top-six quarterbacks in adjusted yards per attempt since last year (including playoffs):

It’s easy to overlook Tannehill because he’s not the focal point of his offense, but in his 23 starts with the Titans, he has passed for 300 yards or accounted for multiple touchdowns in every game except for one.

Not once with the Titans has he been anything worse than a fantasy QB2. 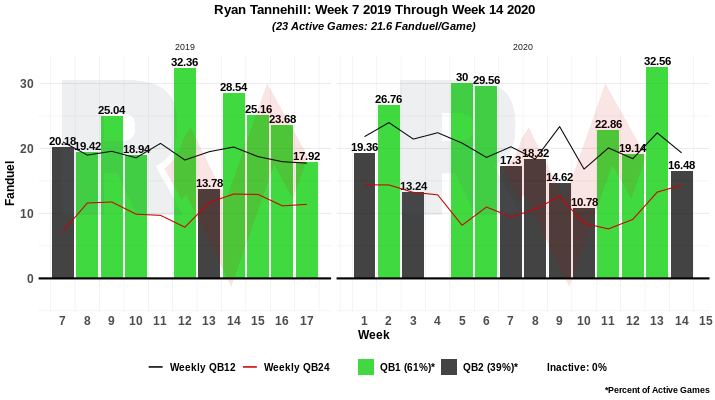 On a week-to-week basis, Tannehill has a high floor.

Against a defense that ranks No. 29 with 29.9 points allowed, the Titans could go off.

Tannehill is a low-end QB1 with upside in season-long leagues and the top option in the Freedman Model for FanDuel.

… but that doesn’t mean I’m down on Jackson or enthusiastic about the Jags. Even though he missed a chunk of the game, Jackson wiped the Browns last week with 163-1-0 passing and 9-124-2 rushing, and the Jaguars are No. 31 with a 26.9% pass-defense DVOA and without starting cornerbacks C.J. Henderson and D.J. Hayden (hamstring, IR).

… and Ryan has position-high marks with nine Pro Trends and a 95% Bargain Rating on DraftKings. Since 2018, Ryan trails only Patrick Mahomes in 300-yard passing games with 22.