This piece will identify some of my favorite DFS stacks of the weekend. Be sure to use our Stacking tool found within our Player Models to find the highest projected stacks, the stacks that figure to be chalky and more. Our Correlations page is also a great resource to find hidden edges in stacking positions and games.

With the highest game total of Week 1, the Browns-Chiefs game pops as our first stacking opportunity. The argument for Travis Kelce is simple: make the obvious play at the most challenging position.

Kelce is coming off a dominant season where he ranked tied for No. 1 among all tight ends in targets (145), total touchdowns (11) and led the position in receiving yards (1416. He finished as the overall TE1 five times, and ranked inside the top-five on 13 different occasions. Kansas City will face a Cleveland team that allowed the fourth-most fantasy points to opposing tight ends last season.

However, Kelce’s expensive price tag triggers the need for savings at another position. That brings Baker Mayfield into play, at a great value (QB13 on DK, QB12 on FD). The Chiefs allowed the 12th-most fantasy points to opposing quarterbacks, including 29 passing touchdowns. While the Browns would prefer to run the ball with Nick Chubb and Kareem Hunt, the Chiefs only allowed seven rushing touchdowns, the fewest in the NFL.

If Mayfield produces, it’s going to be to Odell Beckham Jr. The 28-year-old wideout is finally healthy after battling injuries over the past few seasons. Beckham missed 10 games last year after tearing his ACL in Week 7. He still brings 4.4 speed, tremendous hands, and the ability to dominate a week as shown by his five receptions, 81 receiving yards, and two touchdowns overall WR1 performance at Dallas in Week 4.

Using the Fantasy Labs DFS Lineup Optimizer, I generated lineups from DraftKings and FanDuel under the following criteria.

We certainly want representation from Kansas City, and Kelce is likely to have a good game if the Chiefs put up a high total. I added a rule to the FantasyLabs Optimizer to include Travis Kelce in every lineup. The Mayfield-Beckham pair popped in the overwhelming majority of these lineups. The savings on Mayfield also allowed for other high-priced players at RB and WR. 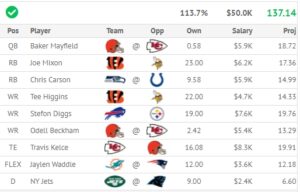 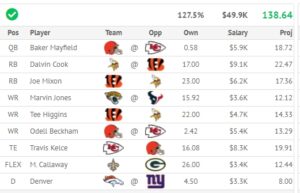 If you don’t want to stress about tight end, play it safe with Kelce. Bring back the Mayfield-OBJ stack and enjoy solid representation in the highest projected total on the Week 1 slate.

Given the uncertainty around the 49ers backfield, Mostert only projects for 4.4% ownership in our Bales Model. There is always a bit of injury-risk baked into Mostert, as he has missed 19 games the past three season. But there is no safer time to pick the explosive 29-year old running back, than in Week 1 against the lowly Lions.

Mostert is one of the most explosive backs in the league, leading all running backs with an 8.8% Breakaway Run Rate in 2019. He is tethered to a San Francisco offensive line that is again ranked in the Top 10 by PFF. Trent Williams finished with the highest overall grade among tackles, and right tackle Mike McGlinchey finished with the second-highest run blocking grade.

They face a Lions defense that allowed the most fantasy points per game to opposing running backs in 2020, including 29 total touchdowns. Mostert increased his passing game usage in 2020 with 11 receptions in his first four games.

Detroit brings in a new head coach in Dan Campbell, who certainly brings a defensive mindset. But devoid of any substantial personnel upgrades, Detroit’s front seven and secondary rank both rank in the bottom third of the league per SharpFootball.

Mostert’s value is incredible as only the 19th-most expensive running back on DraftKings. Using the optimizer, I was able to use the Mostert savings to stack Patrick Mahomes with Travis Kelce, and still squeeze in New Orleans’ Alvin Kamara. 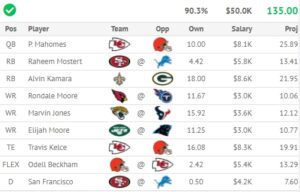 The unclear usage of rookie running back Trey Sermon has also contributed to a suppressed ownership projection for Mostert. However, Mostert is likely to receive solid work and the coveted goal line touches in Sermon’s first NFL game.

The game has a modest 45-point total, but San Francisco’s run-heavy approach combined with Mostert’s speed indoors in Detroit, make this a huge upside stack against one of the worst teams in football. In a game with the take advantage of the Mostert usage and stack with the talented San Francisco DEF/Special Teams.

One of my favorite Week 1 stacking opportunities that was solidified by preseason play. Teams declare their intentions by actions in the preseason, and Jacksonville’s offense could be sneaky good this season.

Despite a very reasonable salary on FanDuel (15th among quarterbacks), Lawrence projects as a Week 1 high floor/high ceiling DFS play. The Clemson rookie has our eighth-highest Median Projection and 10th-highest Ceiling Projection, even on the road against the woeful Texans.

In his last preseason game, Lawrence looked sharp at Dallas, leading the Jaguars to two touchdowns on only two of his first three drives. DFS players should also recall Lawrence’s rushing ability, which allows for an explosive play at any time.

The Jacksonville offensive line returns all five starters. Center Brandon Lindor posted the best pass-blocking grade of any center per PFF, anchoring a stout interior line against a weak Houston pass rush. With a plethora of Week 1 quarterback options, Lawrence only projects to carry 6.6% ownership on FanDuel per our Bales Model.

I’m stacking Lawrence with the affordable Shenault, who looked very much like the Jaguars’ top receiving option in the preseason. The season-ending injury to pass-catching running back Travis Etienne, should open up even more targets for Shenault.

Shenault stands 6-foot-1, 227 pounds, and brings a 103.2 (78th percentile) Speed Score per PlayerProfiler. He should feast off a Houston defense that allowed the seventh-most fantasy points to opposing wide receivers in 2020, including 22 touchdowns (third-most).

Offensive coordinator Darren Bevell has big plays for Shenault, as outlined by this excerpt from The Athletic’s Brandon Howard:

He carries our ninth-highest wide receiver rating in the Bales Model for Week 1, at the 35th-highest price. However, Shenault is the third-highest priced wide receiver on his own team, with D.J. Chark and Marvin Jones both valued higher on FanDuel. Making it even easier, Houston just traded No. 1 CB Bradley Roby to the Saints.

The bring back wide receiver play here is veteran Brandin Cooks. With only Chris Conley and Nico Collins competing for targets, Cooks is absolute WR1 in Houston. Despite mediocre projected quarterback play from Tyrod Taylor, Cooks has the big-play upside at a very reasonable price. Cooks is just the 20th-most expensive wideout on FanDuel.

Using Player Rules on the FantasyLabs Optimizer, I was able to create a FanDuel lineup that has representation from every stack above. 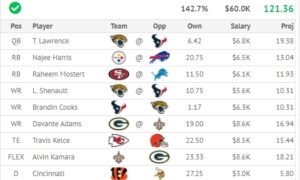 The Texans have the worst roster in the NFL and the lowest win total projection at just 4.5. This game only carries a 45-point total, but the Lawrence-Shenault-Cooks stack carries the perfect combination of value and upside to allow to big-name players in other positions.