We’ve reached the pinnacle of football: Super Bowl Sunday. We’re about to experience another brutal seven months without America’s favorite sport, but first we have 60 more minutes of action between the Eagles and Patriots. Be sure to check out our Vegas Lines and Outliers articles to stay updated on every important trend from Sin City. This week’s positional breakdowns will be replaced by DraftKings and FanDuel-specific pieces, so first let’s make sure we’re extra prepared for DraftKings’ special Showdown mode.

There isn’t a Pro Bowl/Super Bowl slate like last season, so ‘Classic’ DraftKings rules won’t apply this week. Feel free to skip ahead if you’re familiar with Showdown. A few notes on the new-ish game style formulated to maximize exposure options in a single game:

Without further adieu, let’s get into Super Bowl 52.

Tom Brady ($15,500): The Jaguars’ league-best defense in DVOA had a 10-point fourth quarter lead, but it wasn’t enough. All Brady did in his toughest challenge of the season was throw for 290 yards and two touchdowns, marking the ninth time in his last 10 playoff starts he managed to throw for multiple scores. The fact he managed to do so largely without Rob Gronkowski (concussion, probable) is even more incredible, but the return of the best tight end the league has ever seen would obviously be appreciated vs. the Eagles’ 17th-ranked defense in DVOA against tight ends.

With or without his No. 1 target, Brady will likely be forced to move the ball through the air against an Eagles defense that  ranks among the top-five defenses in fewest rushing touchdowns, yards per game, DraftKings PPG, and Plus/Minus allowed to opposing running backs this season. Passing the ball against the league’s seventh-ranked defense in pass DVOA won’t be a piece of cake either, especially considering the Eagles’ tenacious defensive line has five of PFF’s top-30 highest-graded pass rushers this season. Still, #DomeTom has proven to be nearly as terrifying as #PlayoffBrady:

The Eagles’ 19th-ranked defensive line in adjusted sack rate has played better in the playoffs than their season-long production might suggest, but even the league’s best defenses at getting after the quarterback haven’t slowed down the Patriots this season. Per our Trends tool, Brady has averaged 22.8 DraftKings points per game (PPG) with a +1.0 Plus/Minus in five games against top-seven defensive lines in adjusted sack rate. Brady holds the slate’s highest price tag, but also the highest projected Plus/Minus and median projection in our Pro Models.

Nick Foles ($12,800): Foles joins Donovan McNabb as the only quarterbacks in franchise history to surpass 350 passing yards and throw three touchdowns in a playoff game. It was an even more incredible feat after taking into account the Vikings’ second-ranked defense in overall DVOA. Part of Foles’ success can be attributed to his newfound ability to beat the defense deep. He completed just one of 14 passes thrown 20-plus yards downfield for 17 yards, zero touchdowns, and one interception in Week 14 through the Divisional Round, but completed four of five-such passes last Sunday for 172 yards and two touchdowns. The Patriots didn’t make a habit of preventing big plays this season, as they were one of just 12 units to allow at least 10 passes of 40-plus yards this season.

Still, the Patriots managed to turn their once-porous defense around after a brutal start of the season:

The Patriots’ once-maligned secondary is now far from a pushover, although Foles demonstrated his ability to shred one of the league’s best defenses last week, and Bill Belichick’s defenses have allowed multiple huge passing performances in the Super Bowl before. While the Patriots’ eighth-ranked defense in DVOA vs. tight ends could prove problematic for Foles and his No. 1 weapon Zach Ertz, the defense doesn’t rank higher than 20th in DVOA vs. wide receivers or running backs. If you use our Lineup Builder to stack Eagles pass catchers with Foles, consider Jay Ajayi, Alshon Jeffery, Nelson Agholor, and Torrey Smith.

Dion Lewis ($8,900), Rex Burkhead ($6,900), and James White ($8,100): Burkhead was active last week for the first time since Week 15, but played just three snaps and received one touch. White out-snapped Lewis 33-31 as the Patriots were forced to play from behind and function in two-minute mode for the majority of the second half. Lewis continues to offer the most upside among the group, racking up 24 carries and 18 targets over the past two weeks. The latter figure will be especially important against an Eagles defense that ranks among the top-six defenses in fewest DraftKings PPG and Plus/Minus allowed to opposing running backs this season.

Only Ezekiel Elliott has manged to surpass 100 yards on the Eagles this season, and it took him 27 carries vs. mostly backups in Week 17 to get there. They’ve been less successful against some of the better receiving backs they’ve faced:

Lewis carries the highest projected Plus/Minus in our models and could benefit from the continued absence of Eagles middle linebacker Dannell Ellerbe (hamstring, questionable). Be sure to monitor our Injury Dashboard to view daily practice participation and estimated game statuses for all starters in the Super Bowl. Despite Lewis’ late-season dominance, he’s still given up plenty of red-zone touches to White and Burkhead throughout the season. Check out our Ownership Dashboard shortly after lock to see how chalky the Patriots backfield winds up being.

Jay Ajayi ($8,300), LeGarrette Blount ($5,500), and Corey Clement ($4,300): Ajayi has effectively taken over the early-down role in the Eagles backfield, racking up at least 12 carries in each of his last five games after failing to reach that threshold once in his first five games with the team. LeGarrette Blount remains the goal-line back and has vultured a touchdown inside the five-yard line during each of their two playoff wins. Clement has averaged 17.5 snaps per game over the past two weeks, typically spelling Ajayi in clear pass-first situations.

The group found plenty of running room last week against the Vikings’ 13th-ranked defense in adjusted line yards. It’s tough to see the Patriots’ 31st-ranked unit putting up a tougher challenge. They’ve allowed eight separate backs to rack up 15-plus DraftKings points this season and 6’6″ 325-pound run-stuffer Alan Branch (knee, questionable) hasn’t played since Week 14. The Patriots will need to bring their A-game against the Eagles’ dominant offensive line:

Eagles O-line was getting nasty last Sunday. Hard to deal with Ajayi/Blount when the LOS is pushed 2-3 yards downfield every play: pic.twitter.com/3SfUqZwQyM

The Patriots never exactly found a cure for their putrid front seven, as they allowed an average of 4.7 yards per rush this season – the third-highest mark in the league. Ajayi figures to be the primary beneficiary of this matchup, while Clement and Blount could see larger roles if the Eagles fall behind or get ahead by several scores, respectively. Be sure to utilize our Matchups tool to break down each week’s battles at the line of scrimmage.

Brandin Cooks ($9,100), Chris Hogan ($6,400), Danny Amendola ($9,500), and Phillip Dorsett ($4,000): Amendola has unseated Hogan as the offense’s No. 2 option during the playoffs, as the former lacrosse star has converted his eight targets into an underwhelming 3-24-1 line over the past two games. The absence of Gronk in the second half of last week’s game undoubtedly plays a factor in Brady’s target distribution, but Cooks and Amendola have led the group with 17 and 22 targets over the past two weeks, respectively. Each has a very different, yet winnable, matchup:

The Patriots haven’t activated Kenny Britt during the playoffs and Dorsett has been targeted just once (although he made it count). While the Eagles’ top-seven ranked defense in DVOA vs. WR1s and WR2s could lead the Patriots to attack with their backs and tight ends, both Amendola and Cooks are again lined up to receive featured workloads from the best quarterback of all time.

Alshon Jeffery ($10,000), Nelson Agholor ($7,400), Torrey Smith ($5,900), and Mack Hollins ($3,400): Jeffery only needed five targets to put up a 5-85-2 line last week. This both demonstrates the sky-high ceiling of one of the league’s premiere contest-catch artists as well as the committee nature of the Eagles passing attack. Agholor has led the receiver group with 26 targets during Foles’ five starts, with Jeffery (24), Smith (22), and Hollins (8) following suit. Smith and Hollins have worked as the group’s deep threats, with Jeffery and tight end Zach Ertz taking on larger red-zone roles. Agholor has been the jack-of-all-trades and has the best matchup of the group against a Patriots defense that has struggled mightily against slot receivers this season:

Eric Rowe has been the primary culprit and he’s accordingly PFF’s 15th-worst overall corner out of 121 eligible defensive backs. Jeffery figures to spend most of his afternoon across from Stephon Gilmore, who has good size at 6’0″ 190 pounds and is one of just eight cornerbacks to allow fewer than one yard per cover snap this postseason. Smith and Hollins will take turns testing Malcolm Butler deep, a task that has proven to be possible given he was one of just 10 full-time cornerbacks to allow at least six touchdowns this season. Agholor and Jeffery have two of the three highest projected Plus/Minuses among all wide receivers this week.

Rob Gronkowski ($12,400) and Dwayne Allen ($4,800): Gronk remains in the concussion protocol, but the Patriots are reportedly optimistic he’ll be cleared by Super Bowl Sunday. He’s set up nicely against an Eagles defense that hasn’t fared well against featured tight ends all season. The league’s premier tight end is capable of winning even the toughest matchups and his playoff history (excluding last week’s injury-shortened affair) proves as much:

Allen wasn’t targeted even with two-plus quarters of work as the offense’s featured tight end, and he gained just 10 yards in two regular season games with Gronk sidelined. It’d behoove the Eagles to focus on shutting down Brady’s favorite weapon, but their 19th-ranked defense in DVOA on passes thrown down the middle of the field won’t help their cause. The Eagles don’t have a safety graded higher than 25th in coverage by PFF, and their three starting corners are all at least six inches shorter than Gronk.

The Patriots are currently implied to score 27 points. Gronk has averaged 17.7 DraftKings PPG with a +2.6 Plus/Minus and 64.1 percent Consistency Rating with a team total of at least 27 points. Be sure to monitor our industry-leading News Feed prior to the game to ensure Gronk and his teammates are active.

Zach Ertz ($9,300) and Trey Burton ($3,200): Ertz has a team-high 38 targets since Foles took over under center. He caught all eight of his targets for 93 yards last week against arguably the best pair of safeties in the league, but Devin McCourty and Patrick Chung aren’t slouches either. The league’s No. 8 overall defense in DVOA vs. tight ends ranked among the top-five units in fewest DraftKings PPG and Plus/Minus allowed to the position once September ended. Only Cam Brate, Austin Seferian-Jenkins, and Ryan Griffen eclipsed 13 DraftKings points on the Patriots – but Ertz isn’t your everyday tight end.

Ertz’s +3.8 projected Plus/Minus is the second-highest mark among all players. He was one of just four tight ends to rack up 20-plus targets inside the 20-yard line this season, and he’s certainly capable of winning mismatches against a Patriots front seven without a player graded higher than 20th in coverage at their position. Burton is athletic enough to make plays as well, but his seven targets over his past five games indicate his slim margin of error.

There are several schools of thought when it comes to individual defensive player selection. Some may choose to target the best defenders even though offenses may try to avoid those matchups, while others will look to roster the defense’s worst players in an attempt to rack up fantasy opportunities. With turnovers and sacks constituting the highest return among defensive plays, determining snap counts is incredibly vital to figuring out who will have the most chances to make plays. The following chart indicates all players to play at least 50 percent of their team’s postseason snaps: 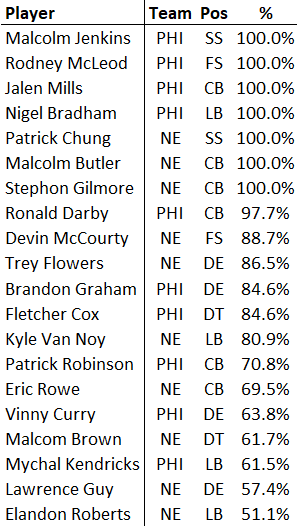 After this piece is published, FantasyLabs is likely to provide news updates on a number of players. Stay ahead of your competition with our NFL news feed.

Super Bowl FanDuel Breakdown: Gronk Is in Position to Smash