Answering Bill Simmons’ Question: Has Any RB Ever Successfully Taken a Year Off?

On Ep. 490 of the Bill Simmons Podcast, Simmons & Robert Mays talk about NFL running back Le’Veon Bell’s 2018 holdout with the Pittsburgh Steelers (33:46).

Here’s what Simmons had to say.

Alright, so Le’Veon Bell took a year away from football to create a situation where he was going to be a marquee free agent in a league where nobody wants to spend more than 10 bucks an hour on a running back. …

I’m trying to think of anyone in my lifetime who held out and missed an entire year and it worked out. …

As it happens, there are three running backs before Bell who have spent significant time away from the game for non-injury reasons and returned.

One of them is already in the NFL Hall of Fame. The other two probably will be.

Williams missed the 2004 and 2006 seasons to retirement and suspension. Jackson sat out the 1986 season after being drafted No. 1 overall because he didn’t want to play for the Tampa Bay Buccaneers.

An All-American fullback and star at the University of Kansas, Riggins was selected No. 6 overall by the New York Jets in 1971. Over the next half decade, he led the Jets in scrimmage yards with an average of 1,008.4 per year (when the league still played only 14 games in a season).

In 1976, he signed a five-year, $1.5 million contract with the Washington Redskins. In his first-year with the team, he was a supplementary piece to second-year Pro Bowl running back Mike Thomas, and in 1977 he missed most of the season with a knee injury.

But in 1978 and 1979, Riggins earned his money, averaging 1,314.5 yards and 8.5 touchdowns from scrimmage per year under head coach Jack Pardee, who was in his first two seasons with the team.

Entering the last year of his contract in 1980, Riggins wanted to negotiate an extension, but the team (understandably) didn’t want to commit long-term money to a 31-year-old back. So Riggins left training camp and sat out the entire season.

How did he spend his time: Drinking and hunting.

As for the ‘Skins, they dropped from 10-6 to 6-10, Pardee got fired and new HC Joe Gibbs had to travel to Kansas to meet with Riggins and ask him to come back.

During the conversation, Riggins told Gibbs: “You need to get me back there. I’ll make you famous.” Riggins got a new contract, which had a no-trade clause.

In his off-field battle with the team, Riggins undoubtedly won — and then he dominated on the field for the next five years.

In the strike-shortened 1982 campaign, he led the league with 177 rushes in the regular season and then carried the team through the playoffs to a Super Bowl victory. In his four postseason games, he had an outlandish 136 carries for 610 yards and four touchdowns. His game-clinching 43-yard touchdown run on 4th-and-inches in the Super Bowl is the stuff of dreams.

In 1983, he had a league-high 24 touchdowns as well as 1,376 yards from scrimmage in his lone All-Pro campaign, once again carrying the team to the Super Bowl, where they lost to the Los Angeles Raiders.

In 1984, Riggins had another age-defying season, putting up a league-high 14 touchdowns as well as 1,282 scrimmage yards while playing with a bad back at 35 years old.

After chipping in 695 yards and eight touchdowns in 12 games in 1985, Riggins retired.

If not for everything he and the Redskins accomplished in the five years after his holdout, Riggins wouldn’t be in the Hall of Fame.

Riggins is the one instance in NFL history of a running back getting to have his cake and eat it too.

He sat out an entire season because he wanted more money. He enjoyed his year away from the game. His team suffered without him. His coach got fired. The new coach had to beg him to come back. He got a new contract. His team couldn’t trade him without his permission.

And then on the field he put up league-leading numbers, won a championship and was named Super Bowl MVP at an advanced age.

The guy is an inspiration. 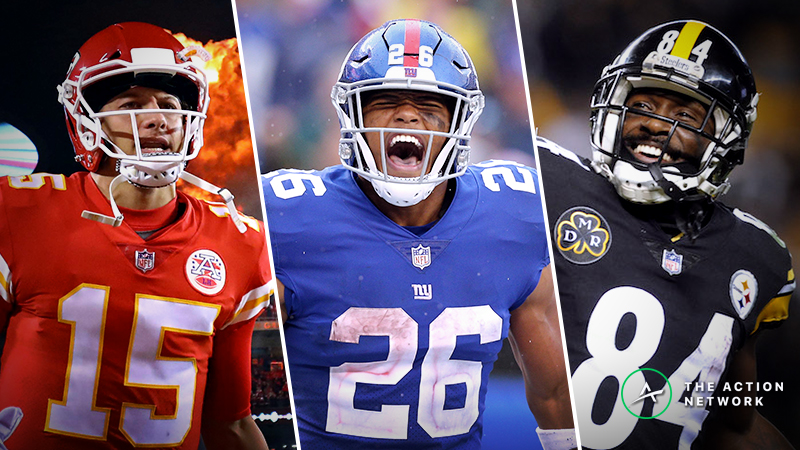 A transcendent talent selected No. 6 overall by the Minnesota Vikings in the 2007 draft, running back Adrian Peterson averaged 1,687.4 yards and 13 touchdowns from scrimmage in his first seven NFL seasons.

His 2012 campaign was especially impressive as he led the league in rushing with 2,097 yards and won the MVP award while returning from an ACL tear that prematurely ended his 2011 campaign.

Entering the 2014 season, he was the best back in the league.

But after playing in Week 1, Peterson was charged by a Texas grand jury with reckless or negligent injury to a child. He eventually pleaded no contest to misdemeanor reckless assault after it was determined that he had disciplined his four-year-old son with a tree branch.

The Vikings deactivated him for Week 2, and he was placed on the commissioner’s exempt list, causing him to miss the rest of the season.

While Peterson’s situation was very different from Bell’s, we nevertheless have another instance of one of the top running backs in the league missing a year of action (or close to it).

When Peterson returned in 2015, he was still his dominant self. Despite turning 30 in the offseason, he led the league with 327 carries, 1,485 rushing yards and 11 rushing touchdowns on his way to his fourth All-Pro campaign.

Since 2015, Peterson has markedly declined, which we’d expect a back of his age to do, but his 1,250-yard performance last year with the Redskins was still impressive for a 33-year-old back. His missed 2014 season seems not to have had any negative impact on the years that followed.

If anything, Peterson looked fresher and more explosive in 2015 because of the time off.

Like Peterson, running back Marshawn Lynch was selected in Round 1 of the 2007 draft. Opening his career with the Buffalo Bills, the physical Lynch flashed in his first two seasons, averaging 1,317.5 yards and eight touchdowns from scrimmage per year.

But in 2009 he fell out of favor with the Bills, who during the 2010 season traded him to the Seattle Seahawks for a 2011 fourth-rounder and 2012 fifth-rounder.

Although Lynch didn’t do much with the Seahawks in his first year with the team (711 yards, six touchdowns in 12 games), they nevertheless won the NFC West with a 7-9 record.

And then in the Wild Card game at home against the New Orleans Saints, he unleashed #BeastMode with his classic 67-yard touchdown run.

For the next four seasons (2011-14), Lynch was one of the best backs in the league, averaging 1,612 yards and 14 touchdowns per year as the Seahawks made two Super Bowls. They won the first one and barely lost the second in part because they didn’t give Lynch the ball at the goal line in the closing seconds.

In 2015, Lynch missed nine games to injury and looked sluggish when active, dropping from 4.7 yards per carry to 3.8. After the season, Lynch announced on Twitter that he was hanging up the cleats and calling it a career.

But after a 2016 season of sitting on the couch and eating Skittles, Lynch wanted to come out of retirement to play for the Oakland Raiders before their move to Las Vegas, and the Seahawks accommodated him with a trade to his hometown team.

Since his return, Lynch hasn’t been great, but he’s been solid considering that he was 31 when he joined the Raiders, who have been terrible (10-22).

In 2017, Lynch had 1,042 yards and seven touchdowns from scrimmage. He looked especially good in the second half of the season, when he had 92.3 yards per game. And over the past two years, he’s averaged 4.3 yards per carry, which is comparable to his 4.4 mark with the Seahawks.

Although Lynch slowed down last season (460 yards, three touchdowns in six starts), it seems that his year away from the game in 2016 gave him at least some short-term rejuvenation in 2017.

As a producer, Bell is similar to Riggins, Peterson and Lynch. Since entering the league as a 2013 second-rounder, Bell has averaged 1,599.2 yards and 8.4 touchdowns from scrimmage per year, and that’s despite playing just 12.4 games per season (not counting 2018).

At the time of his holdout, Bell was arguably the best back in the league.

In situation, Bell isn’t exactly like Riggins, Peterson and Lynch, but there are resonances.

While Riggins was able to maneuver himself into a new contract in 1981, Simmons is right in his evaluation of Bell: His gambit failed.

The team seemed not to miss Bell at all last year. In 13 games, second-year running back James Conner had 1,470 yards and 13 touchdowns. And in three games as an injury fill-in, rookie back Jaylen Samuels had 328 yards and a touchdown.

By sitting out for a year, Bell gave the league the opportunity to see just how replaceable he was within the Steelers offense.

From a monetary perspective, Bell gained little (if anything) by taking time off. In fact, he almost certainly lost money.

1. If he wanted to maximize career earnings, his holdout was -EV.

2. If he wanted to limit risk while seeking more than the $33M guaranteed the Steelers offered, he did it.

But he likely cost himself more than $10M in career earnings.

While there’s a theoretical and non-monetary value that can be placed on the time Bell was able to take for himself in 2018, his decision to sit out was primarily motivated by money, and in terms of career earnings, Bell’s decision wasn’t profitable.

But from an on-field perspective, we have little reason to assume that Bell for the foreseeable future will be anything other than the player he’s been to this point.

He’s with a new team, and we should expect the 2019 Jets to be less offensively dynamic than the 2013-17 Steelers, but Bell’s still likely to produce.

When Riggins returned in 1981, he had a new coach, coordinator and offensive system.

When Peterson returned in 2015, he had a new coach, coordinator and quarterback.

When Lynch returned in 2017, he had a totally new team.

And all of them were in their 30s.

Barring injury, Bell should be fine in his new circumstances, and he’s just 27 years old. For at least 2019, Bell will likely be one of the most productive backs in the league.

Here are my 2019 projections for Bell.

Bell made a financial miscalculation in sitting out 2018, but the year-long absences of Riggins, Peterson and Lynch suggest that Bell will be just fine as a player in 2019.