Free-agency movement can be a blessing or a curse. This is true for NFL players and fantasy investors alike. Sometimes, a change of scenery is all a talented player needs to take his game to the next level; other times, we find out just how difficult it can be to transition to new schemes and different teammates.

Let’s break down some of this offseason’s top free-agent contracts for running backs and attempt to decipher what their role and fantasy impact might be. Read my piece on wide receivers here. 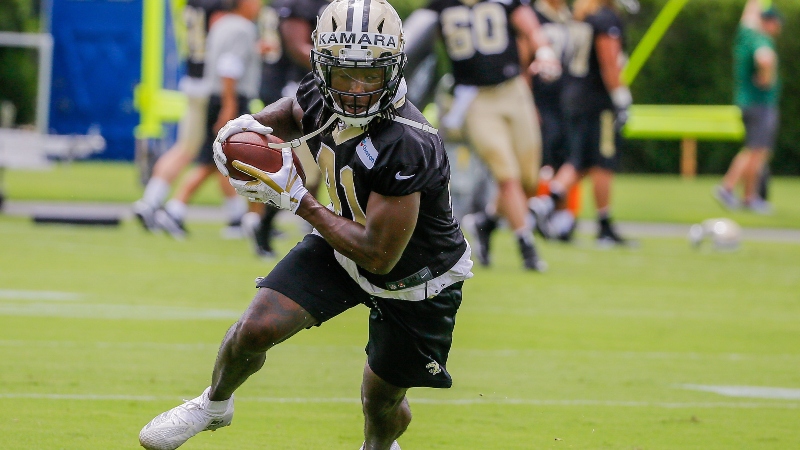 Kyle Shanahan hand-picked the former Vikings SPARQ-plug to be his No. 1 back, giving him the position’s fifth-most valuable contract. The 49ers have a potential out after just one year of the deal, but featured-back duties this season should be a given for McKinnon, especially considering he’s one of just seven backs with at least $18 million in practical guarantees.

McKinnon, a former college quarterback, hasn’t always posted production on par with his athletic credentials during his four-year career, but he remains one of the league’s true freak athletes. The lead-back role in Shanahan’s offense has yielded at least 200 carries and 50 receptions for Devonta Freeman and Carlos Hyde during each of the past three seasons, and Shanahan’s No. 1 back has scored at least seven total touchdowns in each of the past six seasons.

Matt Breida should still offer fantasy value as Shanahan’s West Coast version of Tevin Coleman, but the McKinnon deal indicates he’ll get every opportunity to handle a substantial fantasy-friendly role. The sky is the limit for an offense with Jimmy GQ under center.

The Titans made Lewis the league’s ninth-highest paid back after the soon-to-be 28-year old played 16 games for the first time in his career. Only $8.25 million is guaranteed, but Lewis’ three-down skill set should be put to use for at least the next two seasons.

The result of Lewis’ first full season in 2017 was his finest football yet: He finished the year as the No. 1 overall back in Pro Football Focus’ Elusive Rating and Football Outsider’s Defense-Adjusted Value Over Average (DVOA). He’s expected to form a committee backfield with Derrick Henry in the Titans’ new-look offense under offensive coordinator Matt LaFleur, who helped push Todd Gurley to new heights last season alongside Rams head coach Sean McVay.

… but Lewis has consistently proven to be the superior between-the-tackles runner throughout his career. Overall, Lewis averaged 5.1 yards per carry up the middle in 2017 compared to just 3.7 for Henry (Sharp Football Stats).

Giving 5-foot-7 and 193-pound backs 20-plus touches per game isn’t a recipe for long-term success. LaFleur recently told The Tennessean that the team sees Henry and Lewis as a 1A and 1B pairing. Lewis appears poised to work as the committee’s pass-down back, and it’d make sense for Henry to secure the goal-line role. Both carry RB1 upside if either misses time, and the Titans could emerge with a faster, more fantasy-friendly offense considering they ranked 28th in neutral pace in 2017 while the Rams ranked first.

Hyde’s multi-year deal with the Browns isn’t as large as it initially appears. The team can move on after just one year and $5.5 million, as just $8 million of the total contract is guaranteed.

The 49ers were willing to let Hyde walk after his ‘breakout year,’ which consisted of career-high marks in total yards, rushing touchdowns, and receptions. Hyde finished as the overall PPR RB8 and was one of just seven backs to rack up at least 200 carries and 50 receptions on the season. Still, a closer look at his performance — combined with the skill sets of incumbent space back Duke Johnson and second-round pick Nick Chubb — points toward a committee-backfield approach for everyone involved in 2018.

>> Subscribe to FantasyLabs PRO to get Koerner’s fantasy-point projections for every player every week during the season.

The Bills signed Ivory to what amounts to a one-year contract worth $3.2 million to provide an early-down change of pace as well as potential help along the goal line. That said, he might wind up working as the team’s featured back sooner rather than later pending the outcome of LeSean McCoy‘s potential suspension. Featured and early-down backs over 30 years old have historically posted inferior production compared to their younger counterparts, and backs of all types have generally struggled when paired with below-average quarterbacks and/or offensive lines. Still, volume is hard to come by, and Ivory has consistently played well when handed a large rushing role.

The Jets are able to get out of Crowell’s deal after just one year, although his services are needed more than ever after Elijah McGuire broke his foot during training camp. Crowell’s role shouldn’t be all that different from what we saw in Cleveland: He’s expected to work as the Jets’ starter and early-down back, but Bilal Powell should be involved on pass downs. Thomas Rawls could also potentially steal early-down rush attempts. New offensive coordinator Jeremy Bates worked as the team’s quarterbacks coach in 2017, increasing the likelihood of another committee system behind what figures to once again be one of the league’s worst offensive lines.

About half of Stewart’s multi-year contract is guaranteed, and he figures to work as the direct backup to workhorse rookie/generational talent Saquon Barkley. Every Barkley investor’s worst fear should be the non-zero percent chance that former Panthers offensive coordinator Mike Shula will use Stewart on some early downs and feature him on the goal line. The more likely scenario consists of the Giants heavily featuring the second pick of the 2018 draft, and Stewart likely won’t carry standalone value without a Barkley injury on an offense that hasn’t scored 30-plus points in 33 consecutive games. New head coach Pat Shurmur is expected to utilize a zone-heavy rushing scheme that could enhance Barkley’s out-of-this-world talents.

Blount’s contract is fully guaranteed, and he’ll look to provide some needed goal-line goodness to a Lions offense that hasn’t ranked among the league’s top-20 units in rushing touchdowns since 2014. Still, the team’s decision to draft Auburn running back Kerryon Johnson in the second round will cut into Blount’s early-down work, while Theo Riddick will continue to operate as the team’s pass-down back. It’d be surprising if Blount scores just two touchdowns in 16 games again, but he holds a low floor/ceiling combination in Jim Bob Cooter’s historically pass-heavy offense.

The Patriots re-signed Burkhead to a multi-year deal with $5.5 million in guaranteed money. The team drafted impressive Georgia back Sony Michel in the first round, but Burkhead appears poised to work in a fantasy-friendly role as the offense’s goal-line back with added pass-down work. The Patriots backfield has been a headache for fantasy investors to figure out for years, although Tom Brady has consistently enabled multiple fantasy-relevant backs in recent seasons. The statuses of Mike Gillislee and Jeremy Hill are worth watching considering their respective short-yardage ability, but Burkhead carries a high floor and ceiling as a red zone and receiving threat considering how well he executed this role from Weeks 7-14 in 2017:

Grant was the Jaguars’ most-dangerous weapon during their AFC Championship Game loss to the Patriots, catching three passes in the first half for 59 yards. The team somewhat surprisingly tendered him at a second-round level this offseason despite carrying former first- and second-round picks in Leonard Fournette and T.J. Yeldon. It might take an injury to Fournette for Grant to see more than a handful of touches per game, but the 96th-percentile SPARQ-x athlete possesses true home-run ability just one season removed from leading the league with 8.3 yards per rush (minimum 30 carries).

The Eagles re-signed Sproles even though the 34-year-old is coming off a fractured forearm injury and ACL tear. He’s expected to work as the offense’s pass-down back along with Corey Clement. They’ll both complement Jay Ajayi, who appears poised to operate as a workhorse in 2018 and has a great chance to take over Blount’s goal-line role. Eagles running backs coach Duce Staley believes Ajayi will become the Eagles’ first back with 200-plus carries since LeSean McCoy in 2014. Early reports from OTAs are promising, as Ajayi has spoken of grasping the entirety of the Eagles playbook, and head coach Doug Pederson said, “He’s definitely going into camp as the No. 1 guy.”

Several players were signed to minimally guaranteed contracts and could feasibly be released before Week 1. Players signed to deals with fewer than $1 million in guaranteed salary include: