The Week 6 NFL main slate kicks off on Sunday, Oct. 13, at 1 p.m. ET. In this piece, I highlight the quarterbacks who stand out in our large suite of analytical DFS Tools, most specifically the industry-leading FantasyLabs Models.

Odds as of Wednesday and via PointsBet, where Action Network users get an exclusive 200% deposit match (deposit $50, bet with $150).

Here’s how well Mahomes’ season is going: He’s coming off back-to-back performances of 300-plus yards passing and 20-plus DraftKings points — and yet he somehow disappointed in Weeks 4-5.

Although Mahomes was widely expected to regress this year, his 2019 campaign has closely mirrored his 2018 season.

As was the case last year, Mahomes is the No. 1 quarterback on DraftKings, thanks primarily to his passing prowess. He leads the league with 1,831 yards passing and 2,020 air yards (per AirYards.com).

Even without All-Pro wide receiver Tyreek Hill for most of the season, Mahomes has been an aggressive downfield thrower: He leads the league with 34 deep attempts of 20-plus yards, 639 deep passing yards and eight deep passing touchdowns (per Pro Football Focus).

And yet despite throwing the ball 39 times per game and averaging a top-five mark of 10.3 intended air yards per attempt (per Next Gen Stats), Mahomes has managed not to throw an interception this year.

Last year, Mahomes had the most productive fantasy season ever for a quarterback. He led the league with 9.6 adjusted yards per attempt (AY/A). This year, he has bumped his AY/A to a stratospheric 10.5.

Maybe most impressively, he has hit the 300-yard DraftKings bonus in every game this year.

Since last year, he leads all quarterbacks with an obscene +8.14 Plus/Minus thanks to his ability to go off in any given game.

Unsurprisingly, Mahomes has position-high median, ceiling and floor projections in our Models.

Since last year, in only three of his 21 regular-season starts has Mahomes not been a top-12 fantasy quarterback (per the RotoViz NFL Stats Explorer). 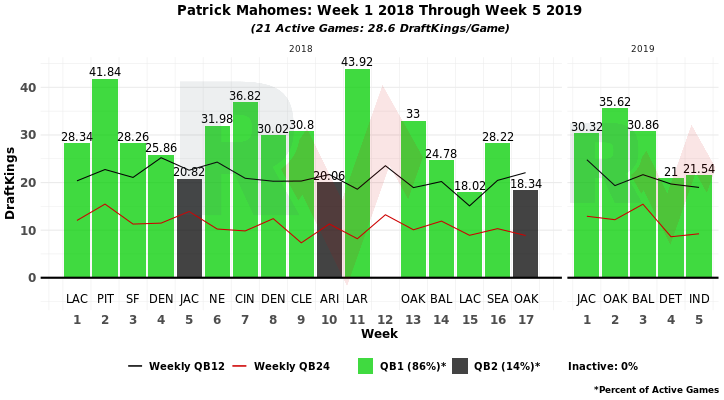 For Week 6, I would understand if you were somewhat cautious about Mahomes: He’s coming off his two most disappointing performances of the year, and Hill (collarbone) and wide receiver Sammy Watkins (hamstring) are both uncertain to play. And if Hill does return, he could be rusty after not playing since Week 1.

On top of that, the Chiefs are at home, and while that should theoretically be a positive, in actuality it’s a notable negative.

Since head coach Andy Reid joined the franchise in 2013, no home team has made under bettors more money than the Chiefs have with their 34-20-1 under record (including playoffs), good for an A-graded 26.1% return on investment (per Bet Labs).

In the Reid era, the Chiefs have actually scored 3.3 fewer points at home than on the road. That’s easily the most negative home/away offensive scoring differential in the league.

In fact, Chiefs games have an NFL-worst home/away total differential of -8.9 points. In Kansas City, NFL games rank No. 26 with a mediocre 42.9 points. On the road, Chiefs games blow out with a league-high 51.8 points. Arrowhead Stadium is a tough place to score, and apparently not just for the visiting team.

If you look in the FantasyLabs Trends tool, you’ll see that since becoming the full-time starter last year, Mahomes has had radical reverse splits (including playoffs).

Given that ownership will be concentrated for this slate since the London game is on Sunday morning and there are four teams on bye, you actually might be justified in asking yourself this question: “Should I fade Mahomes at home?”

While you might not want to go with Mahomes in cash games because of his high salary, for guaranteed prize pools, a full fade would probably be unwise.

Along with the Ravens, the Chiefs have a slate-high 29.75-point implied Vegas total. They still have the potential to put up a lot of points.

Additionally, Mahomes has a good matchup. The Texans are No. 22 with a 54.9 PFF coverage grade, and they have allowed the seventh-most DraftKings points to opposing quarterbacks with 23.3 per game.

In their three games against quarterbacks of the non-Gardner Minshew/Kyle Allen variety, they have been exploitable.

You can use our Lineup Builder to stack Mahomes with arguably any of his wide receivers.

Demarcus Robinson will see the most of rookie cornerback Lonnie Johnson Jr., who has one of the league’s worst PFF coverage grades at 31.1. Byron Pringle — with his combination of size (6-foot-1, 203 pounds) and speed (4.46-second 40-yard dash) — should have an edge on 35-year-old corner Johnathan Joseph. And Mecole Hardman could get loose against corner Bradley Roby, who has allowed a career-high 74.1% catch rate this year with his move from the outside to the slot.

Even at home and even potentially without Tyreek and Watkins, his overwhelming talent and positive matchup make Mahomes almost impossible not to have some exposure to in tournaments.

Mahomes is the No. 1 DraftKings quarterback in the CSURAM88, Levitan, Koerner, Raybon, SportsGeek and Freedman Models.

Coming off his worst performance of the year last week, Jackson is set up to go off.

To start with, Jackson is on the positive side of his splits. In his seven career starts as a home favorite, Lamar has been Lamagnificent, averaging 22.5 FanDuel points per game with a +5.77 Plus/Minus and 100% Consistency Rating.

More importantly, Jackson is better than he showed last week — and it’s not as if his fantasy performance was disastrous, thanks to his Konami Code rushing ability. For the season, Jackson is still the No. 1 FanDuel quarterback with 25.3 points per game.

On a weekly basis, he has exhibited an elite combination of ceiling and floor production.

In his 12 regular season starts, he has always been at worst a mid-tier fantasy QB2. 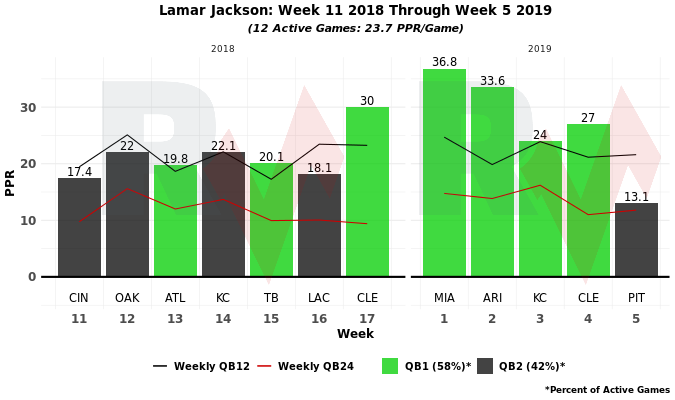 And Jackson’s matchup is glorious. The Bengals defense is No. 31 in pass DVOA (per Football Outsiders). Against the two comparable dual-threat quarterbacks they’ve faced, the Bengals have been exposed.

The Bengals are specifically No. 29 in pass DVOA against opposing No. 1 wide receivers and No. 28 against No. 2 receivers. Whether he lines up against Dre Kirkpatrick or William Jackson III at corner, rookie speedster Marquise Brown has the potential to break free for a couple of long touchdowns, which would really juice Jackson’s passing numbers.

For roster constructions that allow you to pay up at quarterback, L-Jax is a desirable option if you don’t want to spend all the way up for Mahomes.

Jackson is the unanimous No. 1 quarterback in the Pro Models for FanDuel, where he leads the position with his ceiling projection and +5.35 Projected Plus/Minus.

Dak’s production hasn’t always come in the most aesthetically pleasing of ways. For chunks of the past two weeks, he has been almost unwatchable within the Cowboys offense.

And yet he’s the No. 6 DraftKings quarterback with 25.3 points per game this year. His Week 4 performance at the fantasy-friendly Superdome was horrifying, but in four of his five games he’s had at least 25 DraftKings points. 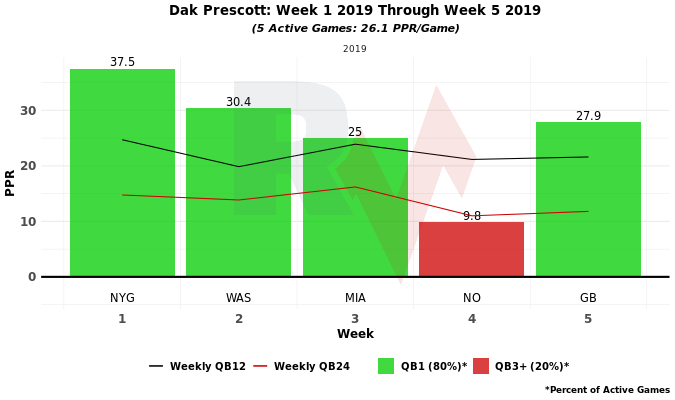 And he’s gotten his production with a good combination of passing and running.

Under new offensive coordinator Kellen Moore, the Cowboys have been much more aggressive in attacking downfield. This tendency can perhaps be seen best through Dak’s year-over-year change in intended air yards per attempt (per Next Gen Stats).

Dak actually leads the league with 29 deep attempts and 18 deep completions, and he’s No. 2 with 604 deep passing yards (per PFF). With one of the league’s best wide receiver duos in Amari Cooper and Michael Gallup, the Cowboys will likely continue to attack with the deep ball, which should give Prescott a high weekly ceiling.

Really, as important as Moore is to Dak, his receivers are perhaps just as significant. Dak’s passing splits with Cooper are notable (including playoffs).

And it’s probably not a coincidence that Dak’s best games this year — at least from a fantasy perspective — have been the three in which Gallup was active. The second-year receiver has taken a massive leap forward this season: The sample is small, but he leads the league with 113 yards receiving per game.

With Cooper and Gallup on the field together, the Cowboys might have one of the league’s most dynamic passing offenses.

It’s not great for the Cowboys that they seem likely to be without All-Pro left tackle Tyron Smith (ankle). They have significantly underperformed in the Dak era without Smith (including playoffs).

Additionally, the Jets have been surprisingly not awful in pass defense, ranking No. 8 with a 74.6 PFF coverage grade. Last week, Carson Wentz scored just 12.1 DraftKings point against them, albeit in a 31-6 victory. And although Josh Allen, Baker Mayfield and Tom Brady all hit their salary-based expectations in Weeks 1-3, it’s not like they went off: They collectively averaged 20.7 DraftKings points per game.

Finally, it’s worth nothing that Dak is on the road, where he’s been on the negative side of his splits throughout his career.

But even with these three negative factors, I’m fine with using Dak as a mid-salaried option in cash games. And in GPPs, he could have reduced ownership: I expect that the four quarterbacks in the Chiefs-Texans and Cardinals-Falcons games will attract most of the attention in tournaments.

And I should say that concerns about the matchup are probably overblown. In my Week 6 WR/CB piece, I project Cooper and Gallup to match up respectively with cornerbacks Trumaine Johnson and Darryl Roberts.

Johnson was so bad in Week 1 that he was benched for Weeks 2-4 before starting again in Week 5. He has a dreadful 39.3 PFF coverage grade. As for Roberts, he’s allowed three touchdowns in four games and a career-high 67.6% catch rate. Cooper and Gallup should be able to gift Dak some easy yardage against such exploitable corners.

Dak is the No. 1 quarterback in the Bales Model for DraftKings.

Deshaun Watson, Houston Texans ($6,700 DK, $8,400 FD): Watson is the No. 3 fantasy quarterback with 24.8 FanDuel points per game. The Texans-Chiefs game could shoot out with a slate-high 55-point over/under. Watson is on the positive side of his reverse splits: In his 11 games as a dog, he has averaged 25.8 FanDuel points with a +9.15 Plus/Minus and 81.8% Consistency Rating.

Russell Wilson, Seattle Seahawks ($6,600 DK, $8,000 FD): Wilson is the No. 2 DraftKings quarterback with 26.7 points per game. He leads the league with 18 end-zone targets, 12 touchdowns passing and a 10.6 AY/A. Browns starting cornerbacks Denzel Ward (hamstring) and Greedy Williams (hamstring) have both missed the past three games and are uncertain for Week 6.

Kyler Murray, Arizona Cardinals ($6,500 DK, $7,700 FD): The rookie is the No. 7 FanDuel quarterback with 20.3 points per game. The Falcons have allowed the second-most FanDuel points to opposing quarterbacks with 24.1 per game and have struggled since losing Pro-Bowl strong safety Keanu Neal (Achilles, injured reserve) in Week 3. Kyler is the only quarterback this year with five starts to hit salary-based expectations in each game. He has a position-high 65% Bargain Rating on FanDuel.

Matt Ryan, Atlanta Falcons ($6,400 DK, $8,100 FD): Ryan is the No. 5 DraftKings quarterback with 26.1 DraftKings points per game. The Falcons have a league-high 72.0% pass-play rate, and Ryan leads the league with 222 attempts and 156 completions. The Cardinals have allowed the fourth-most DraftKings points to quarterbacks with 24.8 per game, and they are without starting cornerbacks Patrick Peterson (suspension) and Robert Alford (leg, injured reserve). Ryan has hit his salary-based expectations and the 300-yard passing bonus each week and averaged a strong +9.02 Plus/Minus on DraftKings, where he leads the position with nine Pro Trends.

Gardner Minshew, Jacksonville Jaguars ($5,000 DK, $6,900 FD): Uncle Rico Jr. is somehow the No. 12 DraftKings quarterback with 19.5 points per game. He’s had at least 18 points each week, and last week he broke out with a 374-yard, two-touchdown performance. The Saints have allowed the fifth-most DraftKings points to quarterbacks with 24.5 per game. With bottom-six salaries, Minshew is a viable cash-game punt.