Week 6 of the NFL season brings the first set of teams on a bye week, with Atlanta, New Orleans, San Francisco, and the Jets all scheduled for extra rest.  Last week we hit on Trevor Lawrence (QB9) and D’Andre Swift (RB10) while correctly fading Kenny Golladay (WR121)

This is a wonderful time of year, so let’s take a deep dive into which players to target and avoid in the sixth week of the 2021 NFL season.

This is a great spot for the New England rookie to have his best game of the season.

Dallas allows the seventh-most fantasy points (21.4) to opposing quarterbacks, which includes the most passing yards (1,638) of any NFL team. With the Patriots rushing attack in flux after yet another fumble by Damien Harris, look for New England to let Jones attack through the air in a game that would be a big step towards a 2021 playoff return.

Jones has yet to post better than an overall QB21 performance but will not be able to rely on the rushing attack against a Dallas defense that has allowed the third-fewest team rushing yards (273) of any NFL team.

Jones is extremely accurate, having tallied consecutive weeks of 77.5 and 76.7 percent. He has crested 270 passing yards three times and will be countered by a Dallas defense that has allowed three 300-yard passing games in their first five contests.

Dallas is the second-fastest situation-neutral team in pace per Football Outsiders, and New England is a surprising 12th, making for more opportunities for both offenses.

New England head coach Bill Belichick needs a win, and with an unreliable rushing attack, he might just let Jones attack Dallas through the air. At this price, Jones gives us huge upside for a fraction of the cost.

I love targeting a home underdog quarterback in a potential shootout, which is exactly the situation with Washington hosting Kansas City.

Heinicke should be able to attack Kansas City in the short-to-intermediate area of the field with strong pass-catching running backs Antonio Gibson and J.D. McKissic. The Chiefs have allowed the fifth-most receiving yards to opposing running backs.

He also has strong DFS rankings in all relevant FantasyLabs categories, including Ceiling and Floor projections. Heinicke is our second highest-rated quarterback play in our Bales Model.

Heinicke’s pass attempts have risen each of the past three weeks, from 24 to 41 attempts. Burrow will have pressure to produce points against the prolific Patrick Mahones, which is the precise situation we want for a quarterback with a fantastic DFS cost.

I’m fading the dynamic Arizona quarterback in a tough matchup at Cleveland. The Browns dropped from third to 12th in overall defensive DVOA after the Chargers game, but that was a uniquely difficult road matchup. Now they return home against an Arizona team that narrowly escaped a home matchup against a 49ers team with the inexperienced Trey Lance under center.

Cleveland is an old-school throwback team that just pounds the ball down your throat on offense, ranking as the top rushing team in the NFL in efficiency. The Browns should control time of possession, forcing the Cardinals away from their preferred rush-heavy attack.

Arizona has key injuries at multiple positions, including at quarterback. Tight end Maxx Williams suffered a season-ending knee injury, and center Rodney Hudson is questionable for Sunday. Hudson left last week’s game against San Francisco with a rib injury, triggering Murray’s injury on the very next play. The injury is to Murray’s throwing shoulder, which should cause Arizona to limit his rushing opportunities. When Murray doesn’t run, his fantasy production drops considerably. Over the past two years, there is a nine-point difference in his fantasy production when he rushes for under 25 yards in a game. 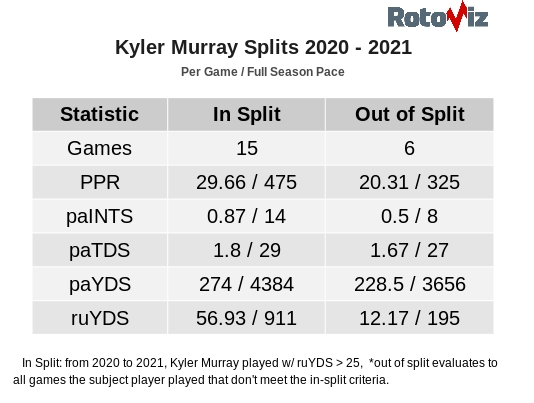 Murray hasn’t produced better than the overall QB9 stat line in any of the past three weeks, with two games of QB15 or worse. As the second highest-priced quarterback on both sites, Murray is a hard fade for me in Week 6.

Get ready for Jonathan Taylor to follow up his overall RB2 Week 5 performance with another big outing in Week 6.

Taylor is finally getting positive touchdown regression after three consecutive scoreless weeks to start the season. The 22-year-old, third-year running back is also being featured in the passing game: a dangerous combination.

Taylor faces a Houston defense that has allowed the eighth-most rushing yards and a Texans team he saw solid fantasy production against as a rookie. In the two games against Houston, Taylor averaged 125 total yards, 3.5 receptions, and one full touchdown per game.

In a game where the Colts are a substantial favorite, Taylor should project for a lot of work, with multiple red-zone rushing attempts. With DFS prices getting set before Monday Night’s game, Taylor still brings a nice discount as the fifth-highest priced running back on DraftKings and the sixth on FanDuel.

Jones has just one RB15 or better performance this season, and history says he won’t generate another one on Sunday against Chicago.

The Bears have usually found a way to limit Green Bay’s lead running back. Jones has barely averaged over 10 fantasy points per game in the last five games between these rivals.

Jones’ season numbers look strong, ranking ninth in receptions (17), fourth in total touchdowns (five), and ninth in fantasy points per game (17.8). But those stats are greatly inflated by his dominant Week 2 performance where Jones finished as the overall RB2.

Chicago still brings the fifth most efficient defense per DVOA, making Jones as the second highest-priced running back on DraftKings and fourth-highest on FanDuel a difficult choice.

Jones is a fantastic two-dimensional runner, but I am not betting against history at this high DFS price tag.

Brown has been incredible this season, tallying the eighth-most receiving yards (451) and second-most touchdowns (five) through five games. He has become a reliable WR1 for the Ravens and is sixth in fantasy points per game at the position. Had he suffered through a multiple drop game at Detroit, he could be even higher.

If Marquise Brown had caught one of his three easy long scores vs Detroit, he would be the #6 fantasy WR on the year in PPR leagues with at least 19.1 PPR points and a score in every game. If he had caught all three, he would be WR1 on the year through four games.

Baltimore battles a Chargers defense that has been incredibly strong against opposing wide receivers. Los Angeles has allowed the second-fewest fantasy points to the position, second only to Buffalo. The Chargers held explosive Kansas City wide receiver Tyreek Hill to just five catches and 56 years in Week 3.

The athletic Denver tight end is still carrying an affordable DFS price tag. Fant has registered three games of TE1 production while posting a 90% or better snap share in three straight games. Fant faces a Raiders team that has allowed solid production to opposing tight ends, including touchdowns to two separate tight ends in Week 3 against the Chargers.

Fant has the fifth-best Ceiling and Floor Projection in our models, with just the sixth-highest price tag.

With wide receivers Jerry Jeudy and KJ Hamler not available, Fant has a chance at a higher than normal target share. His elite athleticism combined with superior usage near the goal line (fourth-most red zone targets) makes Fant a great Week 6 DFS play.

Priced among the cheapest tight ends, Seals-Jones rates as our 11th best tight end play on DraftKings. The Chiefs are a sieve to opposing tight ends, allowing 466 receiving yards, most by any team this season. Seals-Jones earned a 100% snap share last week against New Orleans, replacing the injured Logan Thomas. RSJ turned eight targets into five receptions, finishing as the overall TE14.

The tight end position is so shallow that if Seals-Jones simply added one touchdown catch, he would have finished as the overall TE7 in Week 5. This is a DraftKings-only play, as Seals-Jones is just the 20th rated tight end in FanDuel scoring.  But in the full PPR format of DraftKings, he is a nice value play to save money for other positions.