Divisional Round NFL Fantasy WR Breakdown: Will Michael Thomas Go Off vs. Eagles?

There’s a lot to like about Thomas. With 321 receptions, Thomas is the No. 1 receiver in league history through his first three seasons. Even though this season he was 11th in targets with 147, he finished first in receptions with 125 thanks to his position-best 85% catch rate. Unsurprisingly, Thomas led all players this season with six games of 10-plus receptions.

One factor in Thomas’ favor is that he’s playing at the Mercedes-Benz Superdome (the Coors Field of fantasy football). With quarterback Drew Brees (since 2006), the Saints have been significantly better at home than on the road (per the RotoViz Team Splits App), especially in the passing game.

Additionally, the Saints with Brees at home have a 64-42-2 over/under record, good for an 18.3% return on investment for over bettors (per Bet Labs). In the postseason, the Brees-led Saints are 5-0 to the over at the Superdome.

The Saints have a robust implied Vegas total of 29.5 points: They have a real chance to finish the week as the highest-scoring team on the slate. And in the playoffs, home favorite wide receivers tend to outperform expectations.

But in general it probably doesn’t matter too much to Thomas where he plays: He has been a fairly splits-agnostic player throughout his career.

Regardless of where he plays, Thomas has been productive and consistent on a salary-adjusted basis.

Lining Thomas up all over the formation — 441 snaps wide left, 257 wide right and 229 in the slot — the Saints are strategically scheming each game to get the ball to their receiving playmaker, who has teamed up with Brees for a strong 10.6 adjusted yards per attempt (AY/A). Regardless of where he’s been targeted, Thomas has been a good producer (per RotoViz AY/A App). 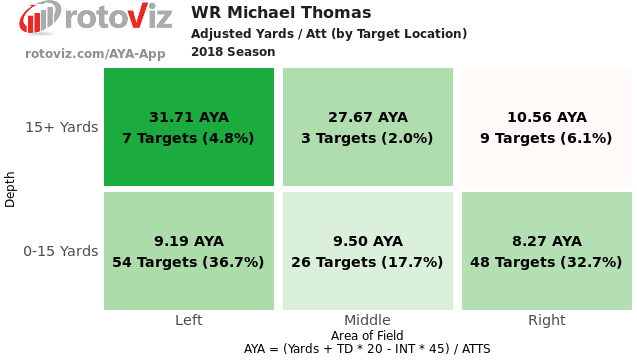 With his efficiency, Thomas leads the position with his median projections and has top-three ceiling projections among all wide receivers in our Models.

But Thomas does carry some concerns with him. He has been far less productive since the return of running back Mark Ingram (suspension) in Week 5. His Ingram-based splits for the season are telling.

These splits make sense. In Weeks 1-4, the Saints had the league’s eighth-highest pass rate at 63.2%. Since then, they’ve had fourth-highest run rate at 51.4%. With fewer targets to go around, Thomas has predictably seen lower usage rates and been less productive.

Most importantly, Thomas has a great matchup this week. Although the Eagles are strong on the defensive line, the secondary has been generous in the passing game this season, allowing a top-four mark of 33.5 FanDuel points per game to opposing wide receivers.

In Week 11, Thomas scored 17.2 FanDuel points against these same Eagles on the strength of a 4-92-1 performance in a 48-7 home victory in which he was barely needed.

The Eagles rely on zone coverage quite a bit, and Thomas has been dominant against zone-heavy defenses this season, averaging eight receptions, 81.3 yards and 0.33 touchdowns in six games against defenses that utilize zone-coverage at a top-10 rate. The Saints and Eagles will likely combine to have the week’s slowest-paced matchup, but the Saints also have one of the most explosive passing matchups of the slate: The Eagles corners are highly exploitable.

On top of that, the Eagles secondary is beyond injured.

For the past month, the Eagles have been using backups Avonte Maddox, Rasul Douglas and Cre’Von LeBlanc as the starting left, right and slot corners. They respectively have mediocre Pro Football Focus coverage grades of 57.0, 70.4 and 71.2 and collectively have allowed a completion rate of 64.9% in their coverage.

Jones practiced in full on Friday, so he seems likely to replace Maddox on the field, but he’s far from certain to play or even make it through the entire game. And even with Jones, the Eagles will be challenged to stop Thomas. On Saturday I will probably bet the over on Thomas’ reception prop.

Thomas has a position-high nine Pro Trends on FanDuel, where he’s the No. 1 wide receiver in the Bales, CSURAM88, Levitan, Koerner, SportsGeek and Freedman Models. 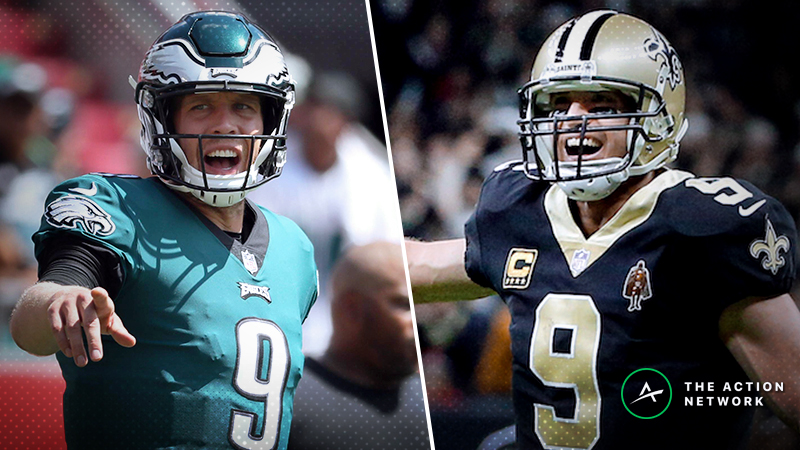 Although he underwhelmed for the first four seasons of his career, Woods has been a significant contributor to the team’s success since signing with the Rams last offseason, and this season he leads the team with 130 targets, 86 receptions, 1,219 yards receiving and six touchdowns through the air. He’s barely second with 1,462 air yards.

With 329 routes from the slot and 266 routes out wide, Woods is the most well-rounded of the Rams receivers. In just two games this season has Woods failed to surpass 60 yards receiving, and both of those were blowouts the team won by 14-plus points. Woods is as consistent as almost any receiver in the league.

Although the Rams looked their regular high-scoring selves in Weeks 16-17, their passing game has struggled since wide receiver Cooper Kupp (knee, IR) suffered a season-ending injury in Week 10.

With significantly more attempts, the Rams without Kupp have completed fewer passes for way fewer yards and touchdowns.

But even without Kupp the Rams have averaged 32.5 points per game, and under head coach Sean McVay the team has hit its implied Vegas total in an NFL-high 22 games since last season. Their offense is as good as any unit in the league.

Over the past two seasons (including playoffs), Woods has exhibited some notable Kupp-based splits.

Woods has seen more targets and been slightly more productive without Kupp, and more importantly he’s been employed as the team’s primary slot receiver.

Where he lines up will matter this week. The Cowboys are 16th against the pass in Football Outsiders’ pass DVOA, and they are 22nd against supplementary (usually slot) receivers. While outside cornerbacks Byron Jones and Chidobe Awuzie have been top-six against Nos. 1-2 wide receivers on the outside, slot defender Anthony Brown has been the weakest of the Cowboys corners with his mediocre 64.7 PFF coverage grade and 67.8% catch rate allowed.

The Cowboys defense is fifth in run DVOA, and this season Rams quarterback Jared Goff has been a significantly better passer at home than on the road.

To maximize their point-scoring potential and to avoid running into the Leighton Vander Esch- and Jaylon Smith-led strength of the Cowboys defense, the Rams might rely on a pass-heavy game plan, which would benefit Woods.

The Cowboys have been consistently good on defense all season: Only once this season did a team score more than 28 points against them, and that was in Week 17, when some of the defensive starters played limited snaps in a meaningless game. By no means should this be considered an easy matchup for the Rams.

But the Rams are at home and coming off the bye, and they have an innovative, offensive-oriented coach and an up-and-coming crush-in-California quarterback. Considering how cheap he is, Woods is in a good spot.

Woods is tied for the position lead with nine Pro Trends on DraftKings, where he’s the No. 1 wide receiver in the Bales, CSURAM88, Levitan, Koerner, Raybon and Freedman Models. 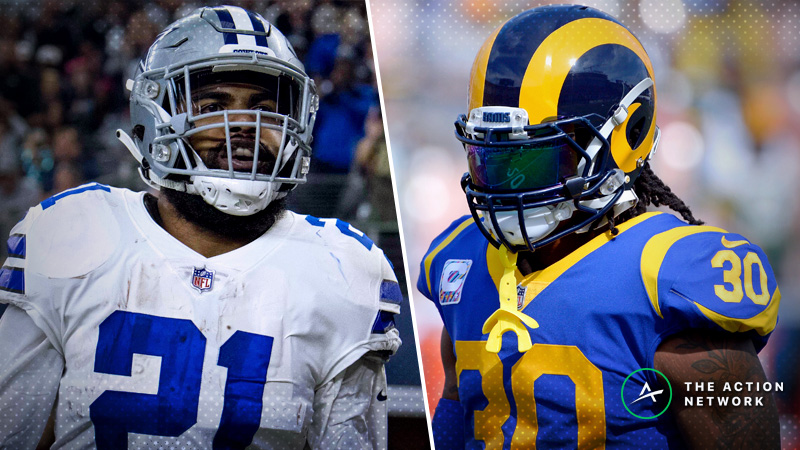 Cowboys-Rams Betting Preview: Is Dallas Getting Too Much Love as an Underdog? – Read now