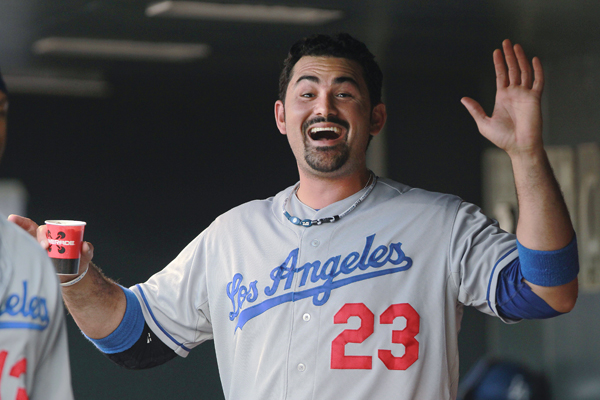 The Los Angeles Dodgers should be a fun team to profile since they seemingly have talent coming out of their ears this season. They are ranked within the top five in several different categories, but I’m most impressed with their power vs. righties. Here is the 2015 leaderboard for home runs against right-handed pitching:

Ridiculously, six of their batters have an ISO of .215 or higher vs righties on the season so far. Going on individual rankings, the Dodgers have six of the top 38 power bats vs R. If you were to pick one team to avoid pitching right-handers against this year, the Dodgers would make a great case to be that team.

As usual though, we will start with on the left side. As a team, the Dodgers are around the middle of the pack offensively when facing a lefty. The team ranks 15th in wOBA and 19th in ISO against left-handers. Here have been their recent lineups when facing a lefty:

I was actually pretty surprised when I saw their team Plus/Minus vs L, which ranks near the bottom of the league on DraftKings. My assumption is that it’s the result of facing righties much more often, which leaves their prices inflated when a lefty comes along. This same type of inflated pricing might be a reason the Rockies are ranked in this same area:

Again, I don’t think that it’s necessarily these players are awful against lefties, it’s just that with higher prices, the Dodgers’ bats have had a hard time matching the expected level of production.

To show you what I mean, let’s look at some numbers for Yasiel Puig and Scott Van Slyke. As you can see, both have excellent numbers in this split, but add minimal value when factoring in their prices. Van Slyke is actually LOSING value despite having a wOBA at .414 and ISO of .242. That’s almost hard to fathom.

Of course, the prices are inflated because of their dominance against righties. Here are the top teams in terms of Plus/Minus vs R. Oh, hi, Rockies.

Broken down individually, where do we even start? Essentially everyone on the team other than Puig and A.J. Ellis is adding value to Plus/Minus for the Dodgers.

Here’s what the Dodgers lineup vs righties has looked like recently. Conveniently, the middle of the order contains the players who have also posted the highest Plus/Minus scores.

A Turner-Gonzalez-Grandal mini-stack has added 6.42 points to Plus/Minus and averaged over 27 points per game. Really though, it’s hard to go wrong with this lineup. Look at today’s lineup, check the prices, and choose your weapons. One last time, the Dodgers performance against righties has made an average offense versus lefties virtually unusable because of price inflation.