Flash back to August 2017. My fantasy football league had an online draft, and one guy couldn’t make the draft due to unforeseen family circumstances. These things happen. His team goes into auto-draft mode, and everyone in the chat mocks “auto-draft guy” relentlessly.

Now it’s Week 1, and I’m slated to play auto-draft guy. I blow up this guy’s phone, tear up the message boards and rally other league members to my cause. And then I lose. In Week 1. To auto-draft guy.

I suck at drafting; that’s what happened. But before you revel in my ineptitude, I’ve got some bad news for you: You suck at drafting, too. We all do. And it’s not just drafting. The problems really start with player evaluation.

The first problem is that we’re not great at comparing players across seasons. The NFL landscape is quickly changing. Is an RB1 more valuable or less valuable than he was in 2005? And what does that mean for your fantasy team? The second problem is that, even though the idea of positional scarcity is mainstream, we’re still learning how to compare players across positions.

In this article, I introduce a new metric called Leverage, which addresses both these issues with player evaluation. In subsequent articles, I’ll dive into the different applications of Leverage, from historical trends to player projections to draft strategy to in-season trades, all with the goal of helping you win your league.

Leverage is designed to improve our understanding of relative worth across both time and position in fantasy football. Within the metric, the numerator represents an individual player’s total fantasy points responsible for and the denominator represents the total fantasy points of all players at the position. A Leverage Score of 100% represents true average relative to a sample population with a flat distribution. If a target individual achieves a Leverage Score of 100%, he has performed to expectations.

For reference, running back Todd Gurley had a positional Leverage score of 301.7% last season and 319 standard fantasy points. Compare that to Priest Holmes in 2002, who scored a superior 373 points. However, Holmes had a Leverage score of just 273.4%, which means that last season Gurley was more valuable within his position than Holmes was in 2002. Looking at trends for a position’s top performers, we can analyze how draft strategies should have adjusted and whether they actually have.

Also, because Leverage measures fantasy scoring on a percentile vs. raw basis, Leverage scores may be compared across different seasons — even different decades — whereas total fantasy points for an individual or for a population simply cannot. 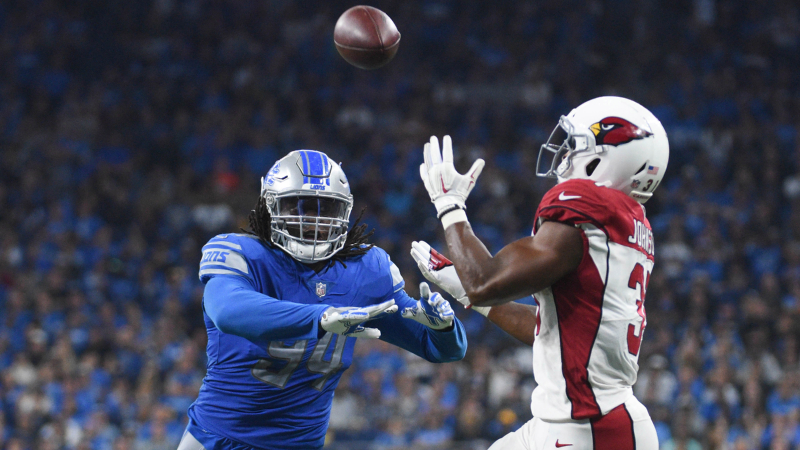 The Issue of Era Comparisons

One issue with backward-looking fantasy strategies is that the fantasy universe has changed dramatically over the last 16 years, because the NFL has changed. We’ve seen the decline of the three-down running back, the rise of the mismatch tight end, and the evolution of high-volume passing attacks. We’ve seen the wildcat formation come and go, and we’ve seen the proliferation of spread formations and run/pass options that seem here to stay. These real-world changes have affected the fantasy sphere. Just look at this chart showing Leverage Scores by position for the top 50th percentile of fantasy players from 2002 to 2017. 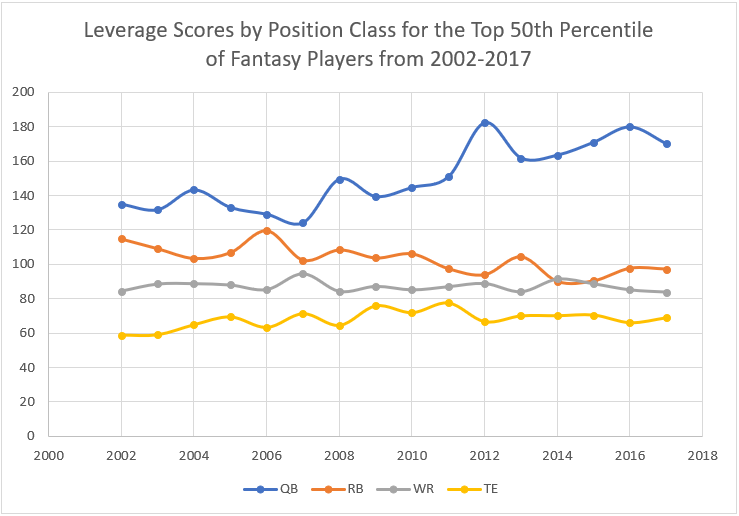 And look at the quarterback position. In 2007, quarterback Leverage was 124.2%, and by 2016 it had risen to a staggering 179.9%. Even last year quarterback Leverage was 170.1%, and that was without Andrew Luck and Aaron Rodgers for most of the year. What’s more amazing is that quarterbacks have increased their Leverage dramatically despite a decrease in their overall numbers each year. We have fewer quarterbacks scoring in the top 50th percentile now than we’ve ever had, and they’re still crushing it. I’ll dive more into this in subsequent articles, but it’s possible that the Late-Round QB strategy is being taken too far, especially in sharp drafts.

Most analysts evaluate one year at a time, looking at player performance across short-term time horizons and projecting players based on opportunity, competition, offensive scheme, etc. That’s understandable, but none of that evaluation takes into account the massive historical revolution we’re seeing. Leverage does.

The Problem With Cross-Positional Comparisons

Say you’re drafting fifth in your fantasy league this year. In front of you, four teams select running backs: Gurley, Ezekiel Elliott, Le’Veon Bell and David Johnson. Now it’s your turn. You could select a running back, maybe Alvin Kamara, who is the RB5 in our expert consensus running back rankings. Then again, you could draft Antonio Brown, our No. 1 wide receiver. What should you do? How do you evaluate a running back vs. wide receiver — or, more specifically, the RB5 vs. the WR1?

To evaluate them properly in a macro sense, you need to know the WR1’s historical production relative to his position group and the entire set of all fantasy players, and then you need to compare that with the production you could expect from a Round 2 receiver. And then you need to do the same exercise for the RB5 and his Round 2 counterpart. Whichever player has the larger differential is the one you should probably select No. 5 overall. This draft evaluation process yields a player’s Draft Leverage Differential, which I’ll explore in my next article. (Spoiler alert: You should take Brown.)

Summarizing Leverage and Applying It

Raw projections are useful, but they’re not normalized for the fantasy population at large, and they lack a macro-historical perspective. A big board really can’t help you make that pick and neither can mock drafts, but Leverage is designed to help you make crucial decisions, whether you’re in the middle of your draft or evaluating a mid-season trade offer.

As mentioned, in future articles I’ll expand on this concept and show you how to apply Leverage to draft strategy and even in-season trades, so stay tuned.

Let’s be honest. Most people wing it. They have a vague understanding of positional scarcity, but they have no idea what that means in actuality. Applying Leverage is the answer: In football, in life and in fantasy.