Using our Stacking tool found within our Player Models, this piece identifies some of the top stacks of the weekend. Check out our Correlations page as well to find hidden edges in stacking positions and games.

It’s very clear that Newton’s shoulder injury is affecting his play, but he’s still finding ways to score fantasy points. He has at least 20 DraftKings points in three of his past four contests, and has picked up his rushing production as well. Newton has at least five carries in three straight games. If he can get those carries in high-leverage situations, there’s still a great ceiling here.

Because of the shoulder injury, Newton has had to rely on McCaffrey even more. McCaffrey’s target share over the past four weeks is 27% after being 22% in the first 11. The Falcons have allowed the most receptions to opposing running backs this season, and McCaffrey leads the NFL in receptions at the position. Newton and McCaffrey have accounted for every single Panthers touchdown over the past four weeks. The correlation between the two players over that time is 0.80.

The Patriots are 13-point home favorites against the Bills as of writing (see live odds here), and Michel is averaging 17.75 carries per game over the past month. Since Rex Burkhead returned from injury in Week 13, the Patriots have run the ball 60 times with a lead or tied. Michel has 33 of those attempts, and no other running back has more than nine. Fullback James Develin has three short touchdowns in that time-frame, but Michel has seven carries of his own inside of the 10 yard line.

Josh Allen has been running the ball like crazy over the past month, but is still likely a quarterback to target when choosing a defense. He’s been sacked six times and thrown four interceptions over the past three games. Those teams ranked fourth, 28th and 29th respectively in Football Outsiders’ adjusted sack rate, and 29th, 13th and 30th in yards allowed per pass attempt.

The Patriots should still be able to get pressure with the 31st ranked pass rush, and they’re eighth in yards allowed per attempt.

Brees and the Saints have labored greatly on a three-game road-trip, but they return to the Superdome this weekend. Even over the past two seasons — where New Orleans has run the ball a lot more — Brees’ home/road splits have been pronounced.

The Steelers are 10th in fantasy points allowed to opposing quarterbacks, and 10th in opponent plus/minus. The Saints are early 5.5-point favorites, and the game total is 53.5.

The Saints passing game very clearly revolves around Thomas and Kamara. They own 28% and 22% target shares, respectively. No other active Saint has a target share higher than 11%. The pair each had nine targets in a 12-9 win over Carolina on Monday night. No other player had more than four. Pittsburgh has allowed the third-fewest receptions to running backs, but some of that has been predicated on matchup. McCaffrey, Austin Ekeler and James White all had five receptions against the Steelers. Especially since Kamara takes some snaps as a receiver, he should be able to catch some passes in this matchup.

Last week I talked about Antonio Brown’s extreme home splits. The opposite has been true for Smith-Schuster.

Assisting Smith-Schuster in this matchup is that the Saints struggle covering the slot, where he has taken 63% of his snaps. Slot corner P.J. Williams owns the eighth-worst coverage grade according to Pro Football Focus out of 116 qualifiers.

The Rams have struggled mightily of late, losing two straight contests and scoring a total of 29 points. That could lead to some folks pivoting away from Los Angeles this week in a road divisional matchup. Currently, the Rams have the highest projected team total on the main slate at 30.75. The Cardinals have been successful on the whole against opposing quarterbacks, but they just gave up 25 DraftKings points to Matt Ryan.

Perhaps the most enticing part of this stack is Woods, who has seen a major price discount in the wake of L.A.’s struggles. He hasn’t been this cheap since Weeks 10 on DraftKings, and plays the valuable slot role for the Rams with Cooper Kupp out for the season. That role also likely keeps him away from Patrick Peterson, who will likely shadow Brandin Cooks. That takes us to Reynolds, who has a 16% target share, and leads the Rams in receiving touchdowns without Kupp.

David Johnson has been the horse for this Cardinal offense for much of the season, and we finally got to see him run some routes down the field in Week 15. 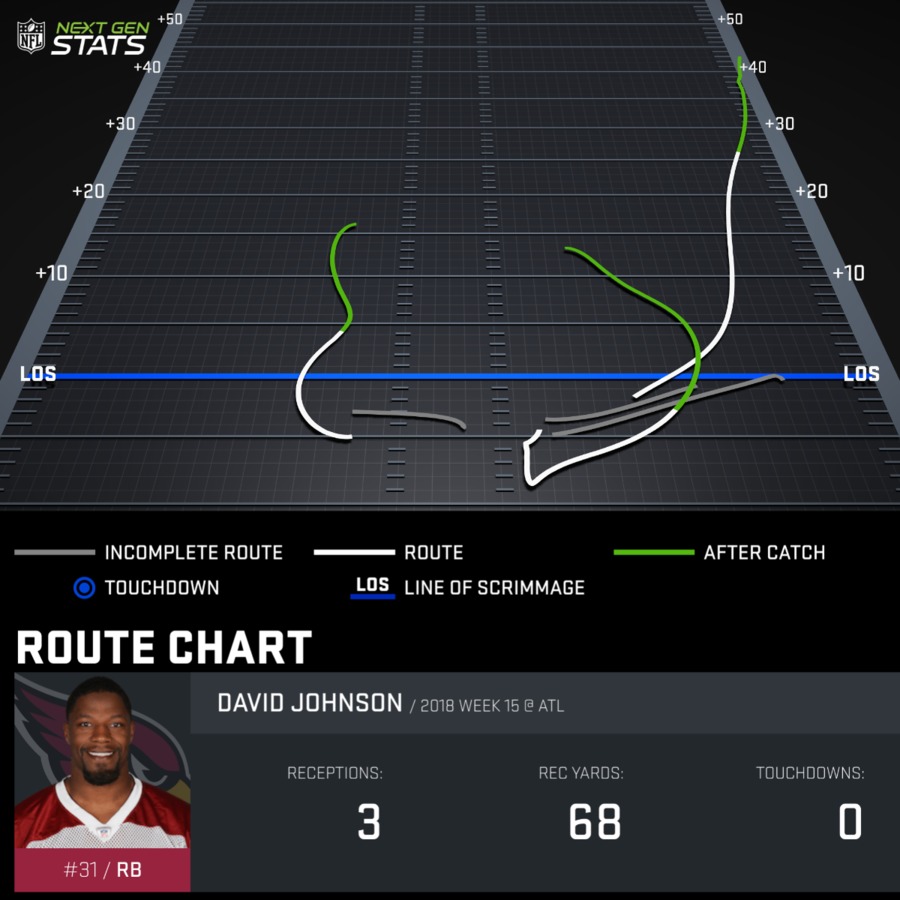 After owning an average depth of target of zero through the first 14 weeks, Johnson saw his aDOT jump all the way to 4.3 in Week 15, far closer to his 2016 number of 4.7 during his breakout campaign. Johnson has accounted for 38.4% of all Cardinal yards since the team’s Week 9 bye.