Mears: Building an Optimal DFS Model for the 2019 Travelers Championship

Using all of that data — specifically the data points in our PGA Models — we can see which metrics have been the most valuable for the Travelers Championship and then use that data to optimize a model for this week.

Building an Optimal DFS Model for the 2019 Travelers Championship

To build this “optimal” model, I backtested all the metrics in our Trends tool and looked at which ones best predicted performance. For example, golfers who were in the top 10% in Course Birdies have historically outperformed expectations by 6.4 fantasy points. Using that data for the highest-rated metrics, I compiled weights for a model. Note that this specific model has a lot of metrics; you can obviously narrow it down to just the top 5-10 if you wish and re-weight it. The metrics listed below are those that tested 3.5 fantasy points above expectations. 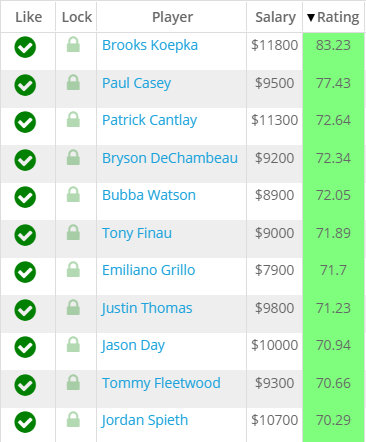 Course history seems to be quite important here at River Highlands; two of the best backtested metrics were Course Birdies and Course Count (how often they’ve played this course). That’s why Paul Casey, who has been very up and down of late, rates as the second-highest golfer in this model: Over his last four appearances here, he’s finished second, fifth, 17th and second.

Bubba Watson also has interesting course history despite middling recent play in 2019. Bubba is a unique golfer in that he has his courses. On those, he doesn’t just do well — he wins multiple times. He’s won twice at Augusta, three times at Riviera and three times here at River Highlands, including last year. This course clearly catches his eye, and thus he’s very high in this model despite badly missing the cut at last week’s U.S. Open.

Overall, though, the data is super interesting this week. River Highlands is not a long course, sitting at just 6,841 yards as a par 70. And yet, driving distance isn’t just a negative, as it often is a short courses — it’s actually a predictive metric. Golfers who ranked in the top 10% in Long-Term, Recent and Course Driving Distance have all performed above expectations. This is not to say to load up solely on bombers; plenty of ball-strikers have won here over the years. But gaining strokes via distance doesn’t seem to be a negative, as we’ve seen Bubba continually do well, along with guys such as J.B. Holmes and Beau Hossler, who tied for second last year.

This model matches up fairly well with buzz scores from FanShareSports, whose data is in our models. Right now the two golfers with the highest scores are Casey and Bubba. Based on that data and the model, intriguing contrarian plays could include Patrick Cantlay, Bryson DeChambeau, Tony Finau, Tommy Fleetwood and Jordan Spieth. All of those players have low buzz scores this week but rank highly in this optimal model.