10 NFL Players Most Likely to Be Preseason Fantasy Superstars

The first major slate of the NFL preseason kicks off today at 7:00 p.m. ET, so now is a good time to think about the players who could break out over the next month.

In the past, we’ve had epic August performances from the likes of Zach Zenner, Ryan Grant and Jeff Janis. Not every preseason producer can turn into an everyday star or even an NFL starter, but for those of us who play preseason daily fantasy their contributions will be recalled into eternity.

If you haven’t played preseason DFS before, check out my five DFS guidelines for dominating the NFL preseason as well as the recent episode of “The Daily Fantasy Flex” in which I break down the secrets of the preseason schedule.

Here are 10 players who could be this season’s “Preseason MVP.”

He should get plenty of playing time behind starter Joe Flacco as he battles Robert Griffin III for the backup job. A first-round dual-threat player, Jackson has the playmaking ability to win guaranteed prize pools, and his rushing potential (eight carries in the Hall of Fame Game) gives him cash-game safety: In the Aug. 8 slate, he has the highest floor projections among all quarterbacks.

The reigning Heisman Trophy winner and No. 1 pick in the draft, Mayfield was the top quarterback in college over the past few seasons (11.9 adjusted yards per attempt at Oklahoma) and has the position’s highest ceiling projections in the Aug. 8 slate. Head Coach Hue Jackson has already said that he will play at least two quarters in Week 1. With his ability and that kind of playing time, he could have massive production. 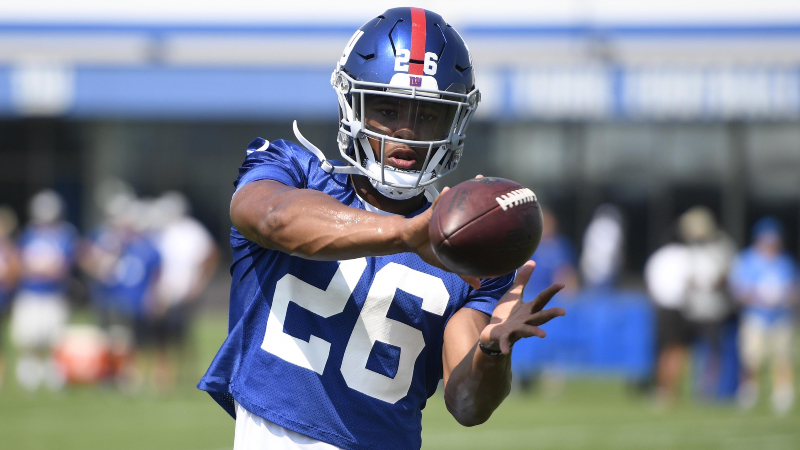 Last year with the Ravens, Mizzell had 40 carries and 12 receptions in the preseason. Now with the Bears, he could see plenty of action once again. The team is relatively thin at the position behind starter Jordan Howard and change-of-pace back Tarik Cohen, neither of whom the Bears need to evaluate in the preseason. That means Mizzell could get a lot of the team’s backfield snaps.

A second-round rookie with first-round talent, Guice fell in the draft reportedly because of maturity issues, but this preseason he’s handled himself like a pro, lighting up practices and signing thousands of autographs for grateful fans. He should get every opportunity in the preseason to beat out Rob Kelley and Samaje Perine for the starting job.

My Twitter handle is @PSUFans2: I can’t not talk about the Penn State legend. A generational talent, the No. 2 overall pick may already be a top-five NFL back. Although most teams don’t give their starters lots of preseason playing time, the Giants might choose to give him extra work so he can practice running in HC Pat Shurmur’s inside-zone scheme and also so they can show why they spent so much draft capital on him.

A young and productive SEC second-rounder, Johnson was drafted by the Lions to be the future leader of the backfield, and he’s been talked up a bit during training camp, but he’s behind veterans LeGarrette Blount, Theo Riddick and Ameer Abdullah on the depth chart. Coming from the Patriots, HC Matt Patricia is going to make Johnson earn his role with the team, and that means he’s going to get some extra preseason opportunities.

A seventh-rounder, Wims was smashed in the HOF Game, turning his massive 10 targets into seven receptions for 89 yards. With his size (6-feet-3, 215 pounds), Wims is a physical receiver fighting for one of the last roster spots. Given how unsettled the depth chart is after Allen Robinson, Taylor Gabriel and Anthony Miller, Wims should get plenty of opportunities to prove his worth.

The No. 9 pick last year, Ross didn’t even manage that number of targets as a rookie, but the team recently cut Brandon LaFell, so Ross has a big chance this preseason to earn a role in three-wide sets. Capable of turning any touch into a touchdown with his speed (4.22-second 40 time), Ross has the potential to be an elite preseason producer.

A second-year fourth-rounder out of California, Hansen saw little action last year, but there’s been a buzz about him since the spring. He spent July working out with rookie quarterback Sam Darnold, who will likely be the guy throwing to him this preseason. After Robby Anderson, Quincy Enunwa and Jermaine Kearse, the Jets have little on the depth chart, and Hansen is a guy who can play across the formation thanks to his size (6-feet-2, 202 pounds) and athleticism (6.73-second three-cone). An elite producer at Cal (92-1,249-11 in 10 games as a redshirt junior), Hansen could break out if Darnold emerges.

Every year, the Patriots provide DFS players with some preseason glory, and McCarron will have opportunities to produce. He has a good camp buzz, and New England’s receiving depth chart has been hollowed out: Julian Edelman is returning from an ACL tear, Brandin Cooks has been traded, Danny Amendola signed with the Dolphins, Jordan Matthews was cut and Kenny Britt is Kenny Britt. A second-year undrafted receiver who as a senior led Iowa in receptions (42), receiving yards (517) and receiving touchdowns (4), McCarron is fighting for a roster spot and should see extended playing time.