A good set of projections is absolutely crucial for success at DFS. It would be a Sisyphean task to make a full slate of projections on your own, and you’d be unlikely to do better than ours. The next step towards DFS success is understanding the difference between floor, median, and ceiling projections, all of which can be accessed through our NFL Player Models.

Especially in large-field GPPs, you need to have a roster with a high enough ceiling, should everything go right, that you can win the tournament. Even in cash, you’ll need a few high scores to profit most weeks. It also doesn’t hurt if you can get your ceiling players to correlate with each other, which you can see by using our Correlation Dashboard.

These terms vary slightly across the industry, but our definition defines Ceiling Projections as the top 15% of scores in the player’s range of outcomes. This means that if the slate was played 100 times, a given player would meet or surpass his ceiling 15 times (and score under his floor 15 times).

However, while every player should theoretically have an equal chance of hitting their ceiling, that can be misleading. Based on the distribution of a player’s scoring, this could mean a few different things. Some players could fall right around their ceiling, give or take a few points, a large percentage of the time. Some players may only reach their ceiling 15% of the time, but some of those games far exceed the projection listed in our models.

It all depends on the distribution of their fantasy scores. Let’s take a look at graphs for two wide receivers (a high-variance position) with similar 85th percentile ceilings over the past two seasons as an example. 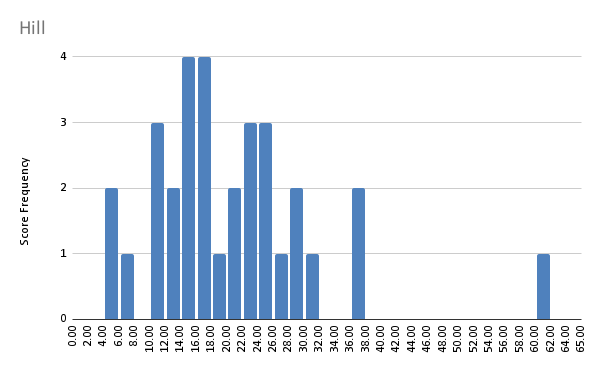 But notice the outlier to the right (as well as the two scores in the 36 point range). Those scores, especially the 60-point effort, are the kinds of games we need to take down GPPs. Of course, they’re few and far between, but I’d be happy only winning the Milly Maker every other season.

Thanks to these outliers, the average score within Hill’s 85th percentile is a monstrous 38.5 points. This is exactly the kind of totals we need at Hill’s usual salary range of around $8,000.

We need to think about GPP lineups in terms of conditional probability. If an event, in this case, a Tyreek Hill ceiling game, happens, what is the probability it helps us win a tournament? While all players have the same odds of a ceiling game (15 percent), the odds of it helping us take down GPPs vary considerably. 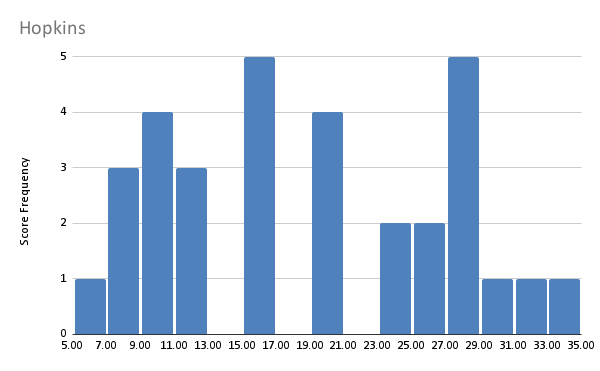 Here’s where things get interesting. Despite having a ceiling outcome within a point of Hill’s, the average within his ceiling range is only 30.52, more than eight points lower than Tyreek’s! With generally similar price points, it’s entirely possible to get a ceiling game from Hopkins and have it still lower your chances of winning a large tournament.

Again, both players have the same chances of getting to their ceiling at 15%. They even have similar ceilings, but what’s different is the probability if they get there that it will help you win a tournament.

How to Use this Information

It would obviously be impractical to do this kind of analysis on every single NFL player. However, it helps to have a general idea of the range of outcomes of the players on your roster. What I plan on doing moving forward is taking a quick eyeball at the game logs (found by clicking a player’s name in our models) for anybody you plan on playing in tournaments. This isn’t perfect for younger players, but for established veterans, it serves a purpose.

You’ll want to look for players with a game or two that far exceeds his current Ceiling Projection, or at least a few games in the neighborhood of 4x (points per $1,000 in salary) their current price. Players like Hopkins and Hill have similar reputations (alpha wide receiver, deep-ball threat, high ceilings), but Hopkins has two 40-point games in our seven tracked seasons. Hill has five in five seasons.

While all Ceiling Projections are created equal, what happens when a player gets there is not. Understanding that could be the difference between winning a tournament and finishing 100th.