Week 2 NFL DFS Stacks: Load up on the Chargers

With the highest game total of Week 2, it’s very difficult to envision winning any sort of DFS tournament without representation in Chargers-Cowboys. Our choice?  The Herbert-Allen-Williams double stack.

Justin Herbert may see a dip in ownership after a disappointing QB26 performance against Washington. He faces a Dallas defense that just allowed the overall QB5 performance to Tom Brady, including 379 yards and four touchdowns.

The Chargers’ consolidated target share makes this double-stack easy to love. In a tough road win at Washington, Herbert connected with Keenan Allen and Mike Williams on 54% of the targets and receiving yards.

Herbert is priced right below Prescott on both sites, providing even more value. The argument of high projected ownership can be countered by the production. If Herbert posts big numbers, you a can be at a disadvantage if you don’t have him in your lineup.

Keenan Allen remains one of the most consistent fantasy wide receiver producers. In the games with Herbert last season, Allen averaged 10.7 targets and 18.6 PPR fantasy points per game.

At home, Allen’s averages were even better: 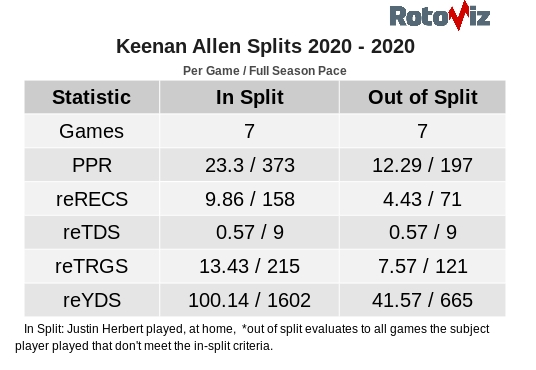 In Week 1, Allen turned 13 targets into nine receptions and 100 receiving yards. Teammate Mike Williams got off to a great Week 1 start in a critical contract year with eight catches (12 targets), 82 receiving yards and a touchdown.

Per the Bales Model, both Allen and Williams are both within the top nine wide receivers per DFS ratings.

Using the FantasyLabs DFS Lineup Optimizer, I generated lineups from DraftKings and FanDuel under the following criteria.

Using our FantasyLabs Optimizer, I made two FanDuel lineups that I love for Sunday. The first gives a fantastic wide receiver bring back in CeeDee Lamb while also allowing for Stefon Diggs and a dominant running back in Dalvin Cook.

The second lineup allows for two high-volume running backs in Nick Chubb and Najee Harris, along with a great flex play in wide receiver A.J. Brown (more on him below): 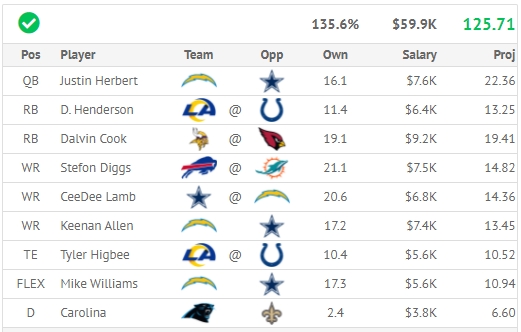 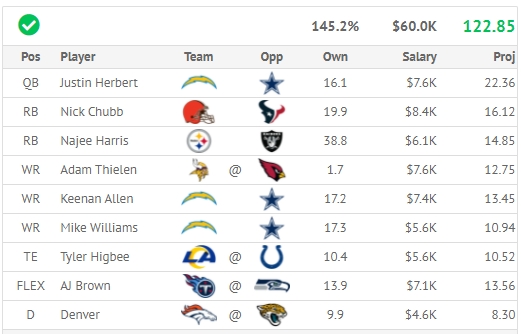 You need exposure to this Cowboys-Chargers game, and Williams’ price discount ($500 cheaper on FanDuel) provides a great opportunity for an explosive double-stack.

Here’s your contrarian stack of Week 2.

Recency bias will suppress the ownership on Ryan Tannehill at Seattle, who is coming off a very disappointing QB24 performance at home against Arizona. We project Tannehill’s ownership to be less than half of Seattle quarterback Russell Wilson’s ownership. This sets up a perfect Titans stack with lead wideout A.J. Brown.

Tannehill and Brown have built a strong rapport over the past two years, especially on the road in 2020. In Tennessee’s last five road games, Brown was on a Top-5 wide receiver pace. 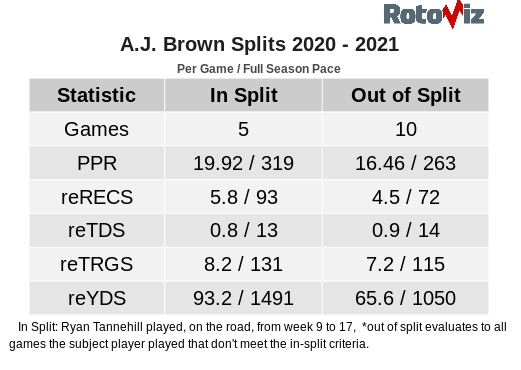 In 2020, Seattle allowed the 10th-most fantasy points to opposing wide receivers. The Seahawks defense also struggled at home, allowing 20.5 points per game to their opponents. Initially, that could be attributed to a lack of fans in attendance, but in the 2019 season? Seattle allowed a shocking 28.6 points per game at Lumen Field. The legendary Seattle defense simply isn’t at their historic level.

Tennessee should play well after being embarrassed at home by the Cardinals. Tannehill had six games of overall QB6 or better and four games of overall QB4 or better last season. I expect a motivated Titans team to keep this game close, which will means scoring points to keep pace with Russell Wilson.

After watching a mobile quarterback in Kyler Murray shred the Tennessee defense for the overall QB1 performance, Wilson is a safe bet to post a big fantasy game. I’m betting Tannehill is also up to the task.

The wide receiver bring-back on this stack is D.K. Metcalf. who was overshadowed by Tyler Lockett in Seattle’s 28-16 win at Indianapolis. Metcalf still found a way to post a late touchdown to complete a four-reception, 60-yard receiving day. Metcalf loved playing at home in 2020, as illustrated by the RotoViz Game Splits App. 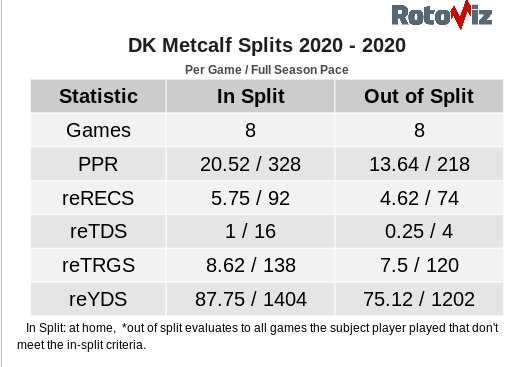 Metcalf averaged one touchdown per game playing in Seattle, and he faces a soft Tennessee defense that will need to also worry about Tyler Lockett after his two touchdowns against the Colts.

Using the optimizer, I was able to use load this QB + WR + Opposing wide receiver stack with either Dalvin Cook or Alvin Kamara and an elite tight end on FanDuel.

Just like the Cowboys-Chargers game, this matchup carries a robust 54-point total. This stack has all the explosive upside but with a much lower ownership. Fade the recency bias and believe in a Tennessee bounce back on the road.

Las Vegas earned a nice comeback win in Week 1 at home against Baltimore but was greatly buoyed by two untimely Lamar Jackson fumbles. This is still a Raiders offense that ranked just 24th in run offense DVOA in 2020 and now faces one of the NFL’s best run defenses in the Steelers.

This profiles to be a big Pittsburgh win at home, with the Raiders having to battle another physical AFC North defense after a Monday night overtime battle against the Ravens. Despite playing at home, Las Vegas allowed three sacks and seven quarterback hits along with an interception to Baltimore.

Pittsburgh’s defense tallied three sacks, eight quarterback hits, a fumble recovery, and a blocked punt touchdown at Buffalo. The Bills are a much better team than the Raiders, indicating a rough potential day for Derek Carr and company.

In a game that projects to a big Pittsburgh win, I expect Steelers rookie running back Najee Harris to explode. Harris was on the field for every single snap against the Bills, one of the few backs in the NFL with a full three-down opportunity. Las Vegas allowed Ty’Son Williams to average 7.2 yards per carry on Monday, along with two rushing scores to Williams and Latavius Murray. Harris is legitimate threat for multiple scores. Yet, Harris is still only the 11th-highest priced running back on DraftKings due to subpar production at Buffalo.

The Pittsburgh defense is only our ninth-most projected owned defense, with one our highest ceiling projection per the Bales Model.

Using Player Rules on the FantasyLabs Optimizer, I was able to create a DraftKings lineup that has representation from every stack above. 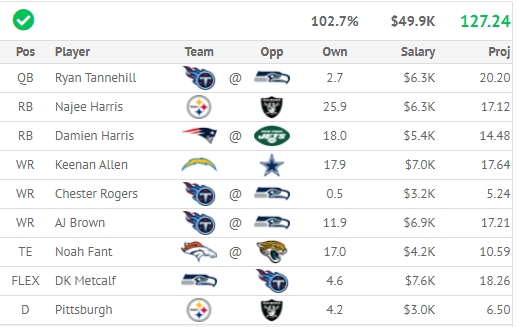 The price of the Pittsburgh defense combined with Harris’s projected volume in a likely Pittsburgh win make this game stack worth a strong look.