With the NFL Draft and free agency having come and gone, we’ll break down all sorts of fantasy-relevant questions entering the 2018 season. Up next is a look at the last remaining member of Seattle’s legendary ‘Legion of Boom’ secondary.

The Seahawks selected Earl Thomas with the 14th overall selection in the 2010 NFL draft, and he’s started as head coach Pete Carroll’s free safety in 121 of a possible 128 games since. Seattle’s Cover 3 defense essentially asks Thomas to handle everything between the numbers while the outside corners each stay over top their respective third of the field.

No safety in recent memory has played a better centerfielder than Thomas.

From 2012 to 2015, the Seahawks defense ranked among the league’s top-five pass and overall units in Football Outsiders’ Defense-Adjusted Value Over Average (DVOA), and Thomas has also posted a Pro Football Focus grade of 85.0 or higher in six of his eight pro seasons.

Recent years haven’t been quite as kind to the Legion of Boom, however, as the Seahawks defense has failed to rank among the top 10 in pass DVOA since 2016. Thomas, Richard Sherman, and Kam Chancellor have combined to miss 25 games during that span, and an aging front seven hasn’t always been able to pick up the slack.

Despite a drop-off in performance over the past two seasons, investing in fantasy players against the Seahawks has remained a poor idea; only wide receivers have managed to have any sort of success against them: 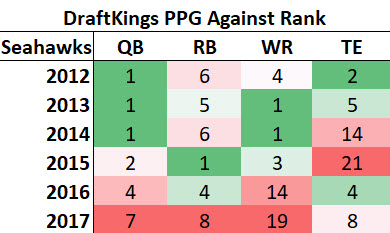 The new-look Seahawks defense might be bad relative to some of their game-changing units from years past, but they still haven’t been a unit to target quarterbacks and running backs against. After issues in 2014-2015, Thomas has helped lock up tight ends in recent seasons.

Per our NFL Trends tool, the Seahawks have ranked among the league’s to six defenses in average Plus/Minus allowed to quarterbacks, running backs, wide receivers, and tight ends since 2014. (Be sure to monitor our Ownership Dashboard throughout the season to see if the public continues to fade offenses facing Seattle, and our Contests Dashboard to analyze how some of the industry’s best-DFS players view the situation.)

Can the Seahawks Survive without Sherman and Chancellor?

The Seahawks chose to move on from both their star cornerback and star strong safety this offseason, making Thomas the secondary’s unquestioned alpha dog for the first time in his career (assuming the Seahawks don’t attempt to move on from his contract as well, which is unlikely).

Replacing Chancellor, who has the ability to simultaneously defend the B-gap while handling coverage responsibilities against tight ends, will be vital in fixing the run defense; the Seahawks have allowed an additional 35.6 rushing yards per game in 11 contests without Chancellor since 2016.

Sherman rarely shadowed opposing No. 1 receivers, and per Pro Football Focus, he has ranked outside of the top-20 full-time corners in yards allowed per cover snap in each of the past two seasons.

Thomas is now 29 years old, but he’s still proven plenty capable of carrying the Seattle secondary; the Seahawks allowed just 198 passing yards per game after losing both Sherman and Chancellor for the final seven games of the 2017 season.

The Seahawks may not rely on a dominating defense and physical rushing attack to win football games as much as they did in the past, but that’s not the fault of the league’s premier safety for six years running. Quarterbacks must approach any throw into Thomas’ territory with extreme caution, and it behooves fantasy players to do the same.