CS:GO Projections for Wednesday, May 13: G2 Bottoms Out

In case you missed it, CS:GO is now supported by our Multi-Lineup Tool! You’ll now be able to customize your player pool, create stacks, and optimize lineups using our tool, which includes my daily projections. The Multi-Lineups tool is free for a limited time, so be sure to check it out!

Wednesday’s slate features three games with an early 7 a.m. ET start. Despite being matched up with the world’s No. 6 team in G2, Astralis is currently the heaviest favorite on the board at -295, with FaZe Clan next in line at -195 against NiP.

One thing I like to do each day is create a three-player team stack rule that includes every team on the slate. From there, I will run an optimization set to see which teams’ three-player combination appears most frequently in the top-projected optimal lineups.

On Wednesday’s slate, that team is G2, and overwhelmingly so. While G2 is listed as a +200 dog, remember, this is still one of the six best teams in the world, and many of its players are available at all-time low salaries. To be specific, huNter-’s $6,800 tag is $600 cheaper than his previous low of $7,400, while nexa, AmaNeK, and jaCkz are each priced below their previous low by at least $1,000. On a slate with multiple attractive options on the high end, it’s easy to see why the discounted G2 stacks are forcing their way into optimals.

Also finding himself at an all-time low salary is olofmeister of FaZe Clan, who checks in at $4,200. While olofmeister’s production of late has been unimpressive, it’s not often you’ll have access to a heavy favorite at this price point. For reference, olofmeister was priced at $6,000 as recently as Sunday.

As for Astralis, Xyp9x is always a reliable option — he’s posted more deaths than kills in only two of his last 10 matches — but his $8,200 price tag represents a new high. Still, he isn’t necessarily overpriced even at $8,200, as his 65.1-point projection is second only to NiKo on the slate. Interestingly enough, while three of the top seven raw projections come from Astralis, they have only one player — gla1ve — who ranks in the top-10 values when factoring in salary.

This creates an interesting situation where optimal lineups contain multiple players from both Astralis and G2, teams that are facing off against each other. While game stacks can sometimes work in CS:GO, you may want to avoid having too many pieces from opposing sides. Luckily, you can create a rule to prevent this from happening with these conditions: 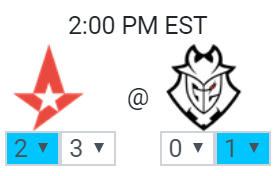 Here, optimal lineups will contain at least two players from Astralis and at most one player from G2.