CS:GO Projections for Wednesday, May 20: Astralis & MIBR Shake Up Rosters

Wednesday’s slate is of particular interest as several of the involved teams have shaken up their rosters as they head into the DreamHack Masters spring tournament. New players in new locations make long-term team-level stats a little less reliable and could catch many DFS players off-guard if they are not paying close attention. Let’s first get into the specifics.

CS:GO DFS Notes for Wednesday, May 20

Given all the recent movement, long-term data is not as useful and we may see some strange results on Wednesday. If you are of the same belief, this will be the perfect opportunity to try out our Range of Outcomes tool. By adjusting the Range of Outcomes setting in our Multi-Lineup tool, you will randomly adjust players’ projections up or down in each optimization run. This will build in more variance to your lineups and will in turn help make your lineups more unique in large field tournaments. 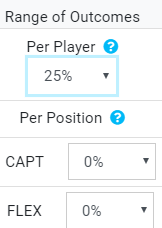 While our tools are currently free for the time being, there’s no reason not to try it out for yourself!

League of Legends: The 3 Biggest eSports DFS Mistakes and How to Avoid Them

Researching 116 League of Legends Games: How You Can Profit

Kills per Win and Deaths per Loss: The Most Important League of Legends Stats

League of Legends Europe LCS Breakdown (6/29-6/30): Schalke to Get Shellacked