We’re on to Week 4 of the Alliance of American Football, which means we once again have the luxury of competing in the glorious pastime known as daily fantasy football.

Before getting into strategy, let’s assess each team’s quarterback, backfield and receiving room to see who has had success — or, at the very least, volume — through three weeks.

Top AAF running backs in opportunities per dollar on @Fanball …

If 100% exposure to Quinton Patton is wrong I don't want to be right pic.twitter.com/ASm6cYE2EK

Rashad Ross has been targeted 20 times this season

Garrett Gilbert is again worth paying up for despite being the slate’s highest-priced quarterback. Meanwhile, John Wolford has gone from the QB2 in pricing to the QB6 simply because of a back injury. There’s a drop off in passing ability from Wolford to Trevor Knight, but Knight’s unique rushing ability shouldn’t be ignored.

Zach Mettenberger is also firmly in play at his reduced price tag.

The rest of the slate’s quarterbacks either don’t offer enough upside (Josh Woodrum, Philip Nelson and Matt Simms) and/or are actively involved in a quarterback competition (Logan Woodside and Marquise Williams).

Trent Richardon remains underpriced relative to how massive his workload has been. His efficiency has nowhere to go but up, and Birmingham’s spotless record hasn’t given the coaches much reason to stray from the game plan.

Zac Stacy, Jhurell Pressley, Branden Oliver and D’Ernest Johnson are the league’s other clear starters, although each is dealing with multiple vultures in their respective committees. San Antonio’s backfield appears to be trending toward Trey Williams.

The best situation to capitalize on is in San Diego. Ja’Quan Gardner and Terrell Watson are locked in as high-floor options as the only backfield utilizing fewer than three backs in the league’s best rushing offense.

Charles Johnson, Rashad Ross, Quinton Patton and Mekale McKay are locked in as the fantasy’s top-four receivers. De’Mornay Pierson-El, Seantavius Jones and Nelson Spruce also appear to be their team’s respective No. 1 pass-game options. Memphis is really the only situation that’s still unclear due to its recent change under center, and each of its top receivers (starting with Reece Horn) are accordingly values thanks to their reduced price tags.

Josh Huff, Greg Ward, Jalin Marshall, Rannell Hall and De’Marcus Ayers are the next best bets for consistency among team’s No. 2 and No. 3 receivers.

One edge that we need to keep an eye on is minimum-priced receivers who are returning from injury. Amba Etta-Tawo and Richard Mullaney could fit that description this week, although neither offers the most-explosive profile.

The only tight ends worth considering in the flex spot this week are Gavin Escobar, Anthony Denham, Wes Saxton and Gerald Christian, in that order. 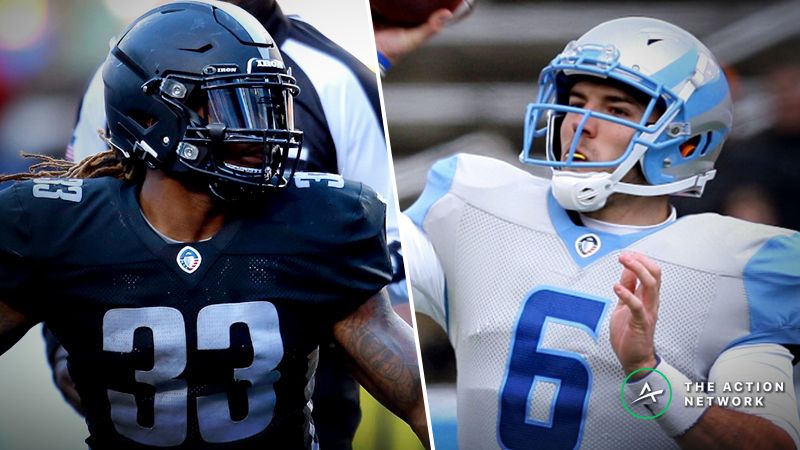 The main question for cash game lineups this week is simple: Do you want to pay up at quarterback? Let’s run through both options.

Yes, Let’s Pay up at Quarterback

We’ll need to find some salary relief to get in both Garrett Gilbert along with cash-game lock Trent Richardson.

Moving off Ja’Quan Gardner and Charles Johnson in favor of Terrell Watson and Jalin Marshall, respectively, saves the lineup countless dollars while sacrificing very few snaps. I’m okay with adding a third Apollos player in running back D’Ernest Johnson considering how much better the Orlando offense has been than the rest of the league as well as Johnson’s strong pass-catching ability out of the backfield.

This core leaves you with $4,300 left to either take a chance on Devin Lucien or potential lead San Antonio running back Trey Williams. I prefer the Williams route.

No, Let’s Save Money at Quarterback

Hopefully we know whether it will be John Wolford or Trevor Knight who will start for the Hotshots before lock. I’m a big fan of locking in both Trent Richardson as well as the entire San Diego backfield with Ja’Quan Gardner and Terrell Watson.

Garrett Gilbert, Zach Mettenberger and whoever winds up starting for Arizona have all consistently attempted to stretch defenses down the field. Targeting the top Orlando and Arizona receivers along with the cheaper Memphis options could help diversify tournament lineups from the public, which will likely lean on running-back heavy exposure.

Denard Robinson and Justin Stockton are the cheapest running backs who should probably be considered while Richard Mullaney and Amba Etta-Tawo are potential min-priced receiver options if they return from injuries — although both players failed to practice to open the week and should be considered doubtful.

Quinton Patton remains my favorite high-priced receiver to take a shot on, but I’ll be avoiding exposure to Luis Perez this week.

Leaving either of the $7,000 backs out of tournament lineups is a risky endeavor, but D’Ernest Johnson, Branden Oliver, Jhurell Pressley and Terrell Watson offer a higher floor than we’ve seen from mid-priced backs in recent weeks.

Arizona (Ross, Huff), Orlando (Johnson, Marshall) and San Antonio (McKay, Ward) all offer a more-than-competent No. 2 receivers capable of out-performing their pass game’s No. 1 option at a massive discount. Quinton Patton remains the league’s most clear-cut No. 1 receiver thanks to the lack of competition on his own depth chart.