We’re on to Week 8 of the Alliance of American Football league, which means we once again have the luxury of competing in the glorious pastime known as daily fantasy football.

Scoring is pretty much the industry-wide point-per-reception format with multi-point bonuses for clearing 100, 150 and 200 rushing or receiving yards and 300, 350 and 400 passing yards.

Be sure to check out this week’s betting guide later in the week for specific Week 7 takeaways along with relevant matchup and injury notes.

Here’s a key to the table below that features the following information for every player included in our FantasyLabs AAF Fantasy Rankings.

Both Brian Brown and Francis Owusu have sub-$4k salaries and played over 80% snaps last week https://t.co/fza8KWPDLY

Have also been impressed by how polished he's been as a WR since Week 1pic.twitter.com/AVc767XaeV 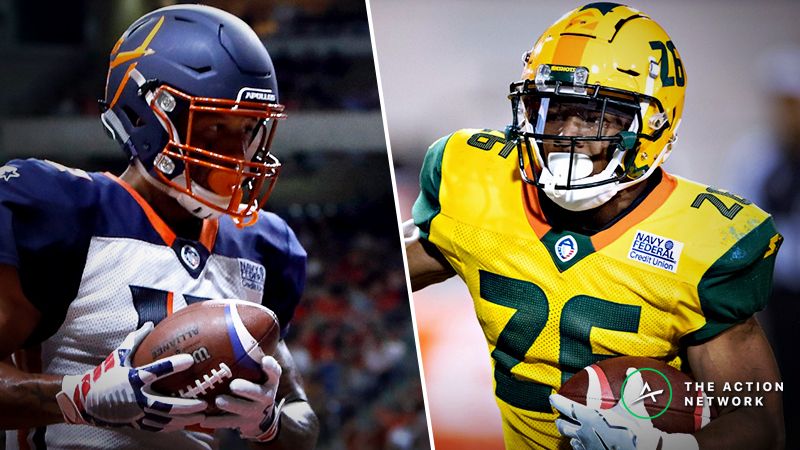 Richardson and Johnson remain cash-game staples as the consensus highest-scoring and most consistent options at the running back and wide receiver position in the AAF. We’re going to stray from our strategy over the past two weeks of also jamming in Pressley considering Arizona’s featured back incurred a salary increase of $600 since last week and is no longer a screaming value.

I’m inclined to utilize Ward Jr. as a salary-saving option thanks to his aforementioned team-high snap count and consistent target share throughout the season. He’s also one of the league’s few wide receivers that offers a reasonable chance to cash in on a passing or rushing touchdown.

This leaves us with enough salary to pay up at quarterback and lock in Gilbert. Adding Jalin Marshall isn’t a bad idea considering he’s locked in as Orlando’s No. 2 receiver, but I’d rather save an extra $1,000 and get D’Ernest Johnson considering there are more fantasy-viable options in the upper-$4,000 range than the upper-$3,000 range.

With a core of Gilbert, Richardson, Johnson, Ward Jr. and Johnson, we can choose from…

I’m planning on finalizing my cash lineup with Radcliff in the belief that he has a higher touch floor than Jones and Mullaney.

Bercovici and Perez have separated themselves as tournament-friendly options at the quarterback position thanks to their consistent volume and penchant for throwing downfield.

Spruce clearly has earned a high level of trust from Bercovici in recent weeks, but Spruce (46% snaps in Week 7) was still a distant third option compared to Brown (85%) and Owusu (88%) in terms of total time spent on the field. The continued absence of Ford allows users to stack Bercovici with Owusu and Brown to open up the rest of the lineup to numerous high-priced options.

Patton continues to be underpriced relative to his target share and offers value in a stack with Perez and Richardson. Overall, Patton (58 targets) and Richardson (43) are two of just nine players with at least 40 targets this season.

Riding with a San Diego core allows users to finalize lineups with rock-solid RB1s and WR1s. The Birmingham route offers less salary relief, but a heightened touch- and snap-floor thanks to Perez’s aforementioned habit of zeroing in on Patton and T-Rich in the passing game.