It’s time for Week 4 in the Alliance of American Football league. Each glorious weekend of action has gifted us at least one viral moment so far, including:

For now, we’ll focus on the on-field product in an attempt to find some value with the odds. What follows is a preview of all four games featuring betting odds, trends, key matchups, injuries, daily fantasy edge and betting pick(s).

And if that’s not enough, we also have this lineup of comprehensive coverage:

Betting market: There’s been movement on the spread and the over/under, as San Diego opened as a -5.5 favorite with a total of 41 points.

The public apparently doesn’t think Zach Mettenberger will prove to be much of an upgrade over whatever the hell the Christian Hackenberg experience was supposed to be.

Which team is healthier? Memphis

Both teams are in solid shape after three weeks of action.

San Diego’s only concerns are difference-making linebacker A.J. Tarpley (back), stud defensive end Damontre Moore (knee) and cornerback Jude Adjei-Barimah (wrist), who each failed to practice to start the week.

Memphis’ only players to not practice in full to start the week was Stacy (illness), defensive tackle Julius Warmsley (ankle) and swing tackle Christian Morris (knee). It would be a surprise if Stacy is ultimately unable to suit up.

Mettenberger was pressured on 6-of-13 (46%) dropbacks during his season debut. This isn’t exactly unusual for the Express, as they’re tied with the Iron for the highest pressure rate allowed on offense (38.7%) after three weeks.

Next up is San Diego’s league-best defense in pressure rate per dropback. The Fleet’s 54.5% pressure rate is well-above the Commanders’ second-place mark of 49%, as Damontre Moore (No. 4 in Pro Football Focus’ pass-rushing productivity metric) and Shakir Soto (No. 5) have each consistently made life rough on opposing signal callers.

Damontre Moore played with the Giants, Dolphins, Seahawks, Cowboys and Raiders from 2013-2018.

Now Moore is the best pass rusher in @TheAAF with league-high marks in sacks (3) and pressures (15). pic.twitter.com/St8XBOWdBT

Memphis has allowed the second-most yards per carry and joins Atlanta as the only units to allow more than 30 fantasy points per game to opposing backfields.

Gardner ($7,000) and Watson ($4,900) are set up brilliantly in this matchup, so why not play them both!? The AAF’s version of Alvin Kamara and Mark Ingram have each racked up double-digit touches in consecutive weeks and currently function as the only two-back committee in the league.

The Fleet are averaging an astronomical 6.3 yards per carry this season and have been plenty content to ram the ball down their opponent’s throats since turning the offense over to Nelson over the past two weeks.

Take advantage of the league’s clearest defined backfield outside of Birmingham before Watson’s price inevitably rises.

Mettenberger played like a top three quarterback during his 30 minutes of action in Week 3 and managed to out-score the consensus top three team in the league. I’ll take the points and continue to ride what’s been a strong home field advantage to start the season.

Betting market: The Apollos are receiving just 4.5 points against the Stallions, who managed to outscore Arizona by five points during their six quarters with Josh Woodrum under center. 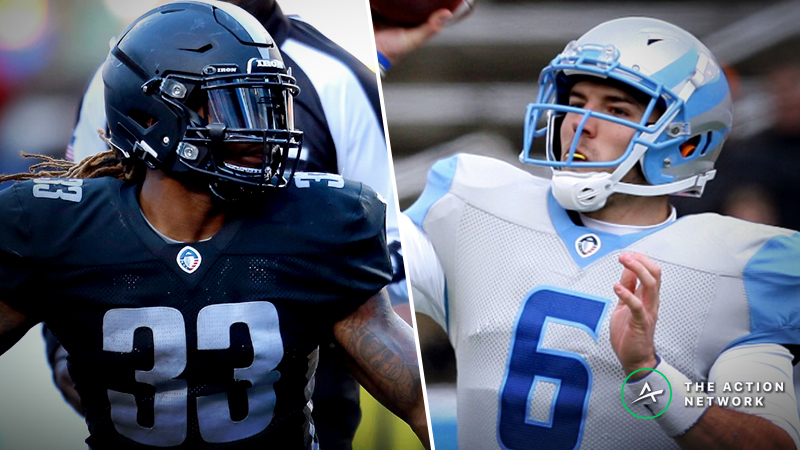 Which team is healthier? Orlando

The only player on the Apollos’ injury report is outside linebacker Ryan Davis (head/neck), who was unable to practice Wednesday.

Salt Lake’s offense runs into problems when Woodrum is forced to hold onto the ball. Only Christian Hackenberg has a lower passer rating than Woodrum does when taking 2.5 seconds or longer to throw, so Orlando’s ability to take away his initial read will be crucial.

The Apollos’ seventh-ranked pass rush in pressure rate per dropback isn’t ideal for screwing with a quarterback’s timing, but their cornerbacks might be good enough to make up for the lack of disruption in the trenches.

Salt Lake’s defense has been solid all season, but there’s a distinct possibility that Orlando’s offense offense is simply in a different stratosphere compared to every other team.

Rostering the starting running back of the league’s clear-cut No. 1 offense is typically a solid move in daily fantasy, which can be had for the low price of $5,500 this week.

Johnson has been the Apollos’ best back all season and is their confirmed Week 4 starter. This role produced a 54% snap rate and 16 combined rushes and targets in Week 3 — each of which were the fourth-highest marks among all running backs.

Top AAF running backs in opportunities per dollar on @Fanball …

Fantasy-friendly touches should continue to flow to the starting running back of the league’s best offense, and Johnson has also demonstrated plus-receiving ability that has slate-winning ability.

I really wanted to take Salt Lake because of how much better the Stallions have played with Woodrum under center. Orlando’s schedule has also been cake so far.

Still, there’s a real possibility this Apollos offense is on an entirely different level than the rest of the league, so I’m fine with backing Spurrier and Co. at anything up to a touchdown.

Betting market: There’s already been some line movement, as the Iron opened as 7-point favorites and have climbed to as high as -8.5 at some books.

Meanwhile, the over/under has been in a free fall since opening at 37.5 points. 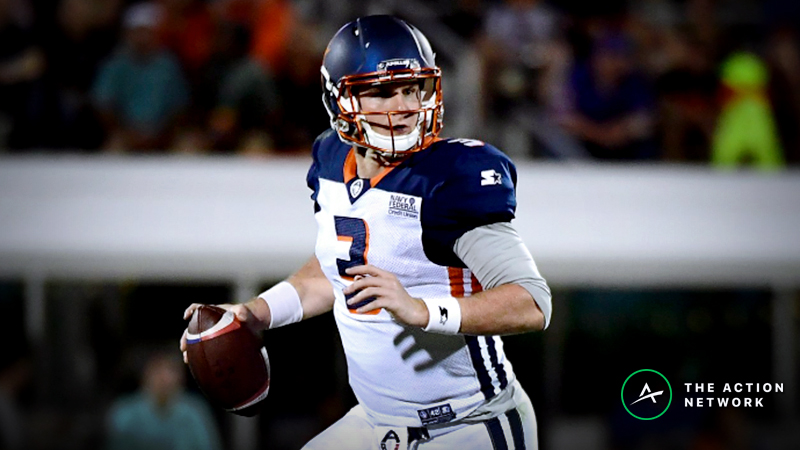 Which team is healthier? San Antonio

The Commanders aren’t dealing with any significant injuries. Only defensive tackle Matt Godin (head) and starting right guard Fred Lauina (ankle) failed to practice in full to start the week.

Meanwhile, the Iron continue to deal with multiple injuries to their receiving corps.

Something has to give.

Of course, last week’s matchup against Atlanta also appeared to set up T-Rich brilliantly … before he managed only 46 yards on 17 carries (2.7 yards per carry).

San Antonio has struggled to slow down any running back they’ve faced this season.

A closer look at his competition reveals Birmingham’s depth chart at receiver is particularly thin:

Meanwhile, the Iron’s aforementioned injury questions could leave Patton as the offense’s only wide receiver who played more than even 40% of the team’s snaps last week.

If 100% exposure to Quinton Patton is wrong I don't want to be right pic.twitter.com/ASm6cYE2EK

Perez has already showed an affinity for feeding his No. 1 receiver, and now he really doesn’t have another choice in a matchup against the league’s worst secondary.

I’m as skeptical of Birmingham’s early-season success as the next guy. But the Iron’s defense (particularly the secondary) seems legit while the Commanders’ defense is bad enough to make even Birmingham’s inefficient unit average for 60 minutes.

Betting market: The Hotshots opened as 13.5-point favorites, but they’re on the rise already.

The over/under has dropped since opening at 41.5, but any news on Arizona quarterback John Wolford (strained back) could be crucial to both the spread and total.

Rashad Ross has been targeted 20 times this season

Which team is healthier? Atlanta

The most significant injury to watch this week is Wolford (strained back), who managed to practice on Wednesday and is considered day-to-day.

Atlanta is believed to be near full health with the exception of right tackle John Kling IV (ankle), who was placed on the injured reserve list. Additionally, the Legends signed running back Brandon Radcliff due to reported injuries to both Akrum Wadley and Tarean Folston.

The Hotshots have averaged a strong 7.7 yards per attempt through the air, a mark that only trails the Apollos (10.1). Meanwhile, the Legends currently employs four of PFF’s bottom 12 cornerbacks in passer rating allowed this season.

Ross and Huff boast enough talent and route-running ability to make life tough on any AAF secondary, let alone what could be the league’s weakest crop of cornerbacks.

Their ability to dominate this matchup would make life significantly easier on Knight if Wolford is ultimately unable to suit up.

Wolford is pretty much the league’s consensus No. 2 quarterback and is facing the undisputed worst team in the AAF. Yet his $5,700 price tag is just the sixth-highest salary among quarterbacks.

Knight is even lower at $5,300, giving us a prime opportunity to roster the signal caller of a top offense facing the league’s worst defense in points allowed per game.

Here’s what Wolford said about his status on Wednesday: “Not 100% yet but hoping to be 100% by the end of the week … just a strain. My back locked up. Nothing serious. X-rays came back negative.”

He certainly looked ready to go in practice.

Quarterback John Wolford, who left Saturday’s game after a hard hit to his back, is looking sharp in today’s @aafhotshots practice. pic.twitter.com/XqgXTIizOE

We’ve seen the biggest mismatch of the week yield spreads up to 16 points in past weeks, so I’m happy to lock in Arizona at a reasonable cost against easily the worst team in the AAF.