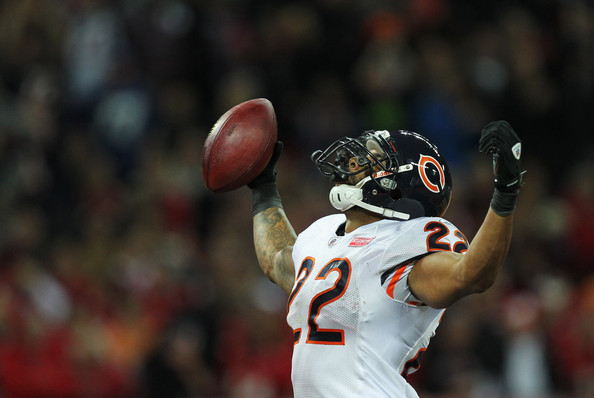 As with season-long leagues, the point value assigned to a reception makes a big difference with how we rank the skill positions in daily fantasy. FanDuel and DraftKings score receptions differently, with a reception valued at 0.5 points on FanDuel and 1 point on DraftKings. I’m going to look at what this has meant for running backs in terms of Plus/Minus in this article.

My first assumption was since receptions are worth more points on DraftKings than FanDuel, that means running backs who are targeted more times in a game are more valuable on DraftKings than on FanDuel. Not necessarily. I applied the filter “Player’s Receiving Targets is 5+” to the 2014 season and here’s what I found:

And it’s not like I’m picking “five targets” out of the air because that was the only number that yielded interesting results. FanDuel backs fared better at value above five targets as well:

The likely culprit here is differences in site pricing, and to test that out, I ran a quick little test. To my existing result set, I added the filter “Bargain Rating is Between 0-50”. In other words, “This player is a bad-to-below-average deal on this site based on his market value on other sites.” Only 21.6% of the RBs who received five or more targets were a “bad deal” on FanDuel, while a whopping 75% were on DraftKings.

This is really only half the story though. We just finished looking at RBs who were actually targeted five times in a single game, but how about RBs who are consistently the most targeted players? I made a list of all running backs who averaged three or more receptions per game in 2014. That includes the following players:

When I looked at Plus/Minus for these players in general, here’s what I found:

If you exclude Matt Forte’s absurd 6.4 receptions per game in 2014, all of these players average between 3.0-5.2 receptions for game. In other words, the points these players received from receptions alone was roughly between 3-5 on DraftKings and 1.5-2.5 on FanDuel. This difference was mostly made up for by pricing differences, although DraftKings backs added SLIGHTLY more value overall.

So while players who average a lot of receptions are almost always valuable, players who were actually targeted a lot were more valuable on FanDuel. What does this mean? It’s open to interpretation, but I’ll tell you my assumption.

Excluding the elite PPR backs, I think the second tier of PPR backs – guys like Vereen, Bush, Sproles, Woodhead, Bernard, P Thomas, etc – are often traps on DraftKings. I think these guys are seen as more valuable in full PPR formats and in a vacuum, they certainly are. But as we saw from the Bargain Rating query, the price hike can be too much for them to overcome on DraftKings.

Game script is probably a major factor as well – yes, they are getting lots of targets, but is there any chance of those targets leading to touchdowns or is it more of a short pass out of the backfield on 3rd-and-18 type thing? If a player who doesn’t normally catch three passes a game is suddenly targeted multiple times in a game, what else is going on in that game? To sum up these thoughts, you may want to ask yourself, “How efficient can I reasonably expect this back to be with the targets I think he will see in this game?”