James Shields: All Over the Place 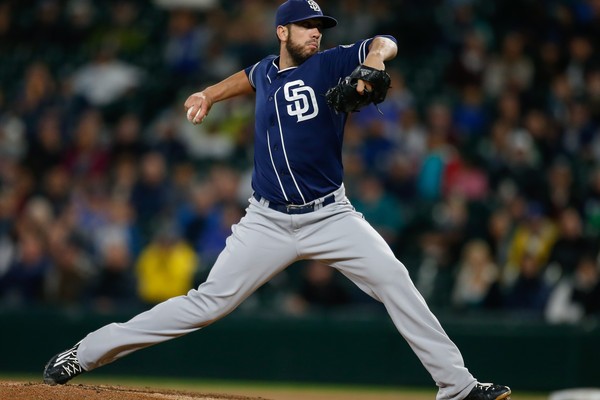 Fast forward to the All-Star break and James has an excellent win-loss record, especially considering the Padres are winning contests at just a .456 clip, but his numbers overall are kind of disappointing compared against pre-season projections.

There are a lot of pretty eye-opening splits to examine with Shields’ 2015 season, but let’s start with home/away. PETCO has helped out James this season in terms of wOBA and AVG, but he is allowing a higher percentage of home runs per at-bat at PETCO.

My assumption on why this is the case has to do with PETCO’s park dimensions. Take a look at these three stats from 2014 and 2015:

While James hasn’t allowed many more fly balls in general, they have led to home runs a lot more frequently in 2015. Had James played every game at Kauffman Stadium this season, he would have saved either four or five home runs and made another a close call:

That might not sound like a lot, but four home runs make up 21% of the 19 he has allowed. With a little luck, six home runs from 19 would have excused James of 31.6% of the home runs he has allowed this year. Either way, it’s a pretty big effect on his season-to-date numbers. The idea of playing Shields AWAY from PETCO is a strategy likely not to be reflected in ownership numbers in daily games, but it could be the right play.

Overall, James is currently in the top 10 (or bottom 10, depending on how you want to look at it) in HR/FB allowed by qualified pitchers and TOP FIVE in total home runs allowed, only four behind Kyle Kendrick. And yet, his FB% ranks around middle of the pack and his xFIP sits at a comfortable 3.30.

One area Shields is excelling this year is strikeouts. Shields’ 10.11 K/9 in 2015 is by far his highest mark in the category, with his current high water mark of 8.82 K/9 coming in 2012 with the Rays. Unfortunately, he’s also walking more batters than ever before with a 3.09 BB/9.

Here’s one thing I want to take a minute to highlight in this article, it matters which advanced pitching measure you choose to plant your flag on. Take a look at the popular pitching measures for James Shields in 2015:

There is close to a full run’s difference in FIP and xFIP based on the same data. In this case, the main reason is James’ home run rate is so high in 2015 and that is weighed much more heavily in FIP than xFIP, which considers a player’s HR/FB rate against a league average substitute, rather than just raw home run totals. This can really skew your projections one way or another and is something to be mindful of when a pitcher rates extremely in a particular category.

So there’s James Shields’ season in a nutshell – he’s winning a higher percentage of games while pitching for a worse team in terms of W-L record, he’s allowing more home runs in what most people consider to be one of the premiere pitching parks in the league, he’s striking out significantly more batters than ever before in his age-33 season, and his metrics are all over the place.

Other than that, his numbers are totally normal.